WMR’s intelligence sources report that the National Security Agency’s “Q Group,” the directorate responsible for overall security for NSA, is actively investigating and harassing NSA employees who have reported on senior officials at the sprawling intelligence agency, which now includes the new U.S. Cyber Command, of engaging in adulterous trysts with subordinates and possessing improper sexual material, including child pornography.
WMR has previously reported on the improper activities of the Q Group, which has become a virtual uncontrolled FBI within the NSA. Q continues to protect NSA senior officials who engage in and promote a culture of sexual exploitation of junior employees at the intelligence agency. Q Group has also misused NSA psychologists and psychiatrists to deem anyone who charges senior officials of the agency with sexual misconduct or harassment unfit to hold a security clearance for reasons of mental impairment.
On August 28, 2009, WMR reported: “NSA Security, headed up by Kemp Ensor III, and NSA medical worked in tandem to deny security access to employees determined to be mentally unfit to have access to classified information at NSA. However, due to the attrition of highly-qualified personnel, the security-medical duo is now prescribing Prozac and Zoloft for NSA employees who refuse to fall into line. NSA is abuzz with the new requirement for employees to take what they call ‘happy pills.’ The sexual harassment scene has also reportedly changed at Fort Meade. In the past, sexual harassment at NSA involved older male managers preying on young female employees. That has now changed in what has become an environment of ‘do ask and do tell.’ WMR has been informed that there is an increase in complaints about sexual harassment from new young male hires about being forced into ‘kinky rendezvouses’ with older male managers.”
Q Group has also gone outside of its legal authority to harass the families and friends of former agency employees who have brought charges against NSA for sexual harassment and misconduct. WMR has learned of NSA personnel illegally masquerading as phone company technicians who entered the property of the family of one such ex-employee. In another case, Q Group personnel poisoned two pet dogs of the family of an ex-employee under NSA surveillance. Q Group personnel have also been used to harass the ex-spouses of senior NSA officials involved in child custody cases. WMR has also been informed that Q Group has harassed NSA employees who have married the ex-wives of NSA senior officials who have ongoing legal battles with their ex-husbands.
Q Group is able to conduct its harassment of civilians in the Fort Meade area with a “wink and a nod” from local law enforcement and other officials. NSA senior managers have dipped into NSA’s substantial slush fund to lavish money on community service projects and programs in cash-strapped local municipalities and counties. The concept of the “friendly NSA that provides funds and jobs” has bought loyalty and silence from local and state of Maryland officials. In addition, WMR has learned that NSA has placed agents within the congressional offices of local members of Congress in order to interdict and retaliate against NSA whistleblower congressional complaints. The NSA “embeds,” who work in concert with NSA’s Office of Legislative Affairs, are found within the offices of Maryland Senators Barbara Mikulski and Ben Cardin, and Maryland Representatives C.A. “Dutch” Ruppersberger, Steny Hoyer, Elijah Cummings, Chris Van Hollen, and Paul Sarbanes, and is currently inserting an agent into the office of freshman Representative Andy Harris.
As discovered in a January 2005, Q Group Personnel Security organizational chart obtained by WMR, Q2, contains an office of counter-intelligence, which WMR has reported has been involved in illegal surveillance of individuals far beyond the NSA infrastructure. 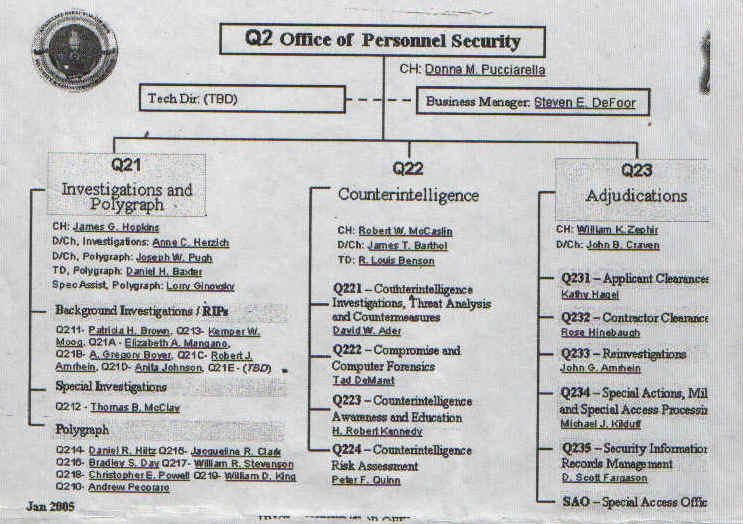 On July 3, 2009, WMR reported: “The Obama administration, rather than lessen the pressure on the NSA personnel, has turned up the heat and is resorting to even more draconian methods to ensure silence. The word from inside NSA is that a state of fear exists and the mission of the agency, to conduct surveillance of foreign communications to provide threat indications and warnings to U.S. troops and policy makers and protect sensitive U.S. government communications from unauthorized eavesdropping is suffering as a result.” Our latest information is that the Obama administration is increasing pressure on NSA personnel to deter leaks.
Obama’s Justice Department is now actively retroactively pursuing U.S. intelligence community leakers from the time of the Bush administration. [They include former CIA officer Jeffrey Sterling, former NSA official Thomas Drake, former State Department analyst Stephen Kim.]….

This is incredible! This is also sickening. We live in a web of evil.

A left/liberal command climate, disagreement is disloyalty and morals are for suckers who’d only get caught if they didn’t have ’em… glad I don’t work there.

I used to hear numerous cases involving sexual harassment. It is a real evil and it is very sickening. And Obama is trying to cover all of this up! No big surprise! He is doing the same thing with his personal records!

I worked for the NSA from 1982 – 2010. My family had a long history of serving the USA in the military, both sides of my family came to America in the 1600’s and I am related to more than one American historical figure. Since I wanted to serve my country and was good at foreign languages, I applied to NSA right out of college. I had never fallen into the trap of promiscuous sex, drinking, or drug use, must less anything criminal so I was accepted readily. In the ensuing years, the most pervese and incomp-etent came to power… Read more »

They also watch us all from sattelites (male & female) setting us up to be raped or unknowingly accept the “watchers” into our lives. They continue watching, harassing, stalking, torturing per sattelites and cameras while using undetectable psychotropics to fulfill their sadism. Military school cadets and “leaders”….thus high suicides in & abroad US, no one stops it. SOS