Who Is Hillary Clinton? by Dick Morris

Posted on November 22, 2014 by Mike howrightismike | Leave a comment

AN ANALYSIS WORTH READING: (and to think about when it is election time….)
by Dick Morris, former political advisor to President Bill Clinton, January, 2014
If you happen to see the Bill Clinton five minute TV ad for Hillary in which he introduces the commercial by saying … he wants to share some things we may not know about Hillary’s background. Beware as I was there for most of their presidency and know them better than just about anyone, I offer a few corrections;
Bill says: “In law school Hillary worked on legal services for the poor.”
The facts are: Hillary’s main extra-curricular activity in law school was helping the Black Panthers, on trial in Connecticut for torturing and killing a federal agent. She went to court every day as part of a law student monitoring committed to trying to spot civil rights violations and develop grounds for appeal.
Bill says: “Hillary spent a year after graduation working on a children’s rights project for poor kids.”
The facts are: Hillary interned with Bob Truehaft, the head of the California Communist Party. She met Bob when he represented the Panthers and traveled all the way to San Francisco to take an internship with him.
Bill says:”Hillary could have written her own job ticket, but she turned down all the lucrative job offers.”
The facts are: She flunked the DC bar exam, yes, flunked, it is a matter of record, and only passed the Arkansas bar.  She had no job offers in Arkansas , none, and only got hired by the University of Arkansas Law School at Fayetteville because Bill was already teaching there. She did not join the prestigious Rose Law Firm until Bill became Arkansas Attorney General and was made a partner only after he was elected Arkansas Governor.
Bill says: “President Carter appointed Hillary to the Legal Services Board of Directors and she became its chairman.”
The facts are: The appointment was in exchange for Bill’s support for Carter in his 1980 primary against Ted Kennedy. Hillary then became chairman in a coup in which she won a majority away from Carter’s choice to be chairman.
Bill says: “She served on the board of the Arkansas Children’s Hospital.”
The facts are: Yes she did. But her main board activity, not mentioned by Bill, was to sit on the Wal-Mart board of directors, for a substantial fee. She was silent about their labor and health care practices.
Bill says: “Hillary didn’t succeed at getting health care for all Americans in 1994 but she kept working at it and helped to create the Children’s Health Insurance Program (CHIP) that provides five million children with health insurance.”
The facts are: Hillary had nothing to do with creating CHIP. It was included in the budget deal between Clinton and Republican Majority Leader Senator Trent Lott. I know; I helped to negotiate the deal. The money came half from the budget deal and half from the Attorney Generals’ tobacco settlement. Hillary had nothing to do with either source of funds.
Bill says: “Hillary was the face of America all over the world.”
The facts are: Her visits were part of a program to get her out of town so that Bill would not appear weak by feeding stories that Hillary was running the White House.   Her visits abroad were entirely touristic and symbolic and there was no substantive diplomacy on any of them.
Bill says: “Hillary was an excellent Senator who kept fighting for children’s and women’s issues.”
The facts are: Other than totally meaningless legislation like changing the names on courthouses and post offices, she has passed only four substantive pieces of legislation.
One set up a national park in Puerto Rico . A second provided respite care for family members helping their relatives through Alzheimer’s or other conditions. And two were routine bills to aid 911 victims and responders which were sponsored by the entire NY delegation. Presently she is trying to have the US memorialize the Woodstock fiasco of 40 years ago.
Here is what bothers me more than anything else about Hillary Clinton.
She has done everything possible to weaken the President and our country (that’s you and me!) when it comes to the war on terror.
1. She wants to close GITMO and move the combatants to the USA where they would have access to our legal system.
2. She wants to eliminate the monitoring of suspected Al Qaeda phone calls to/from the USA .
3. She wants to grant constitutional rights to enemy combatants captured on the battlefield.
4. She wants to eliminate the monitoring of money transfers between suspected Al Qaeda cells and supporters in the USA
5. She wants to eliminate the type of interrogation tactics used by the military & CIA where coercion might be used when questioning known terrorists even though such tactics might save American lives.
One cannot think of a single bill Hillary has introduced or a single comment she has made that would tend to strengthen our country in the War on Terror.
But, one can think of a lot of comments she has made that weaken our country and makes it a more dangerous situation for all of us.
Bottom line:
She goes hand in hand with the ACLU on far too many issues where common sense is abandoned.
See also:
https://fellowshipoftheminds.com/2014/11/21/arkansas-state-trooper-bill-and-hillary-clinton-are-swingers/ 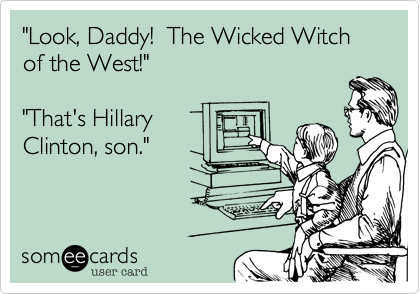 Not that it’s a rare notion, for some reason… 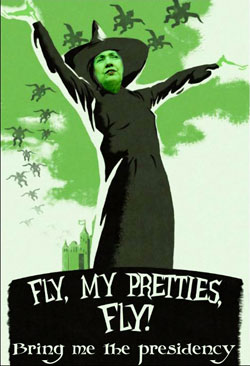 Or the “Hitlery” one, for that matter…

and there goes my pancakes…

She is the epitome of walking deceit…I remember feeling sorry for her during the lewinksy “scandal” and wondered why she would choose to stay with him. Then I realized she had her own political ambitions equal to her hubby’s…she didn’t want a divorce under her belt…she wanted POTUS for herself. She wasn’t upset about the affair itself (open relationship), she was upset that he was sloppy with lewinsky. hillary and bill are two sides of the same coin. She probably wanted a kid to help promote the image of “family” and since bill claimed he was sterile, then someone else… Read more »

interesting….and jolie/pitt are atheists as well…I guess water truly rises to its own level, or in their case…sink

So-in reality,since MOST of her success was gained from riding on Bill’s coat tails,Hillary is America’s most well-known dingle ball.

Who Is Hillary Clinton?
Satan’s bitch.
End of story.
-Dave