Who had insider knowledge of the impending Cyprus bank confiscation

Throughout the week of “negotiations” between the Eurozone Powers that Be and the government of Cyprus, on how much of Cypriots’ privately-owned bank deposits would be looted in exchange for a €10 billion ($13 billion) loan to bail out the heavily indebted country, I was wondering if any of Cypriot elite’s money would be among those “large” (€100,000 or more) bank deposits that would be “levied.”
At the time, I said to FOTM’s joandarc that I very much doubted that the elites would lose their money. I also said that the Cyprus Bank Robbery is setting a terrible precedent and indeed, the contagion already had seeped to other countries (Spain and New Zealand), with the Eurozone chair declaring that the personal bank accounts of other countries can also be raided. I thought out loud that being a small island country, Cyprus probably was chosen by TPTB to be the guinea pig because its small population of a million people are unlikely to mount much of a protest, investigation, or resistance.
Sadly, my cynicism proved to be warranted.
We now have substantial credible evidence that the elite had insider knowledge and so withdrew their money out of Cypriot banks before the the Kabuki “negotiations” had even begun. In the words of Tyler Durden, “the Cyprus deposit confiscation was known by virtually everyone on the ground days and weeks in advance.”
In February, there was a massive surge in Cyprus deposit outflows. Italian media said €4.5 billion ($5.9 billion) left the island in the week before the crisis.
So who had insider knowledge? 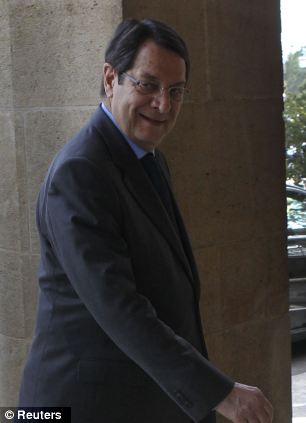 2. The Russians: Cypriot banks were a favorite of Russian nationals, and even they knew and pulled out their money.
3. 132 companies and individuals withdrew their deposits in the two weeks from March 1 to March 15, and transferred them to banks outside Cyprus. Among them is the company Loutsios & Sons, which transferred €21 million to a UK bank. The company’s owner is alleged to have family ties with President Anastasiadis.
The following images are a list of the 132 companies and individuals. (Note: The first vertical column lists the names of companies and individuals; the 2nd, 3rd and 4th columns record the amounts withdrawn in various currencies; the 5th and last column refers to the date of transfer, i.e., the date when the money withdrawal was made.)

Meanwhile, the latest news is that the Cyprus government’s parliamentary committee tasked with tracking down the leaks, has suspended its probe into who withdrew money early.
Sources: Daily Mail, March 22, 2013; ZeroHedge, April 1, 2013; Sigma.
~Eowyn

What word can be uttered against this crap? Thanks Dr. E, for looking into this, and confirming what most of us thought.

So how come the schools didn’t get prior notice? The amount needed now is so large, that it’s hard to imagine what state owned “stuff” will have to be sold to private interests to raise the new amount that Cyprus apparently owes. Where did all the money that is being paid back go? What did the banks invest in ? Even if every Cypriot had purchased a BMW and had granite work tops put into their kitchens, it doesn’t seem possible for such a small population of people to have squandered so much money away. Who is being paid back,… Read more »

Bet Soros knew of it too.

His money is in Swiss banks , away , faraway from the commoners .

Shades of 9/11 when enormous put options against the airlines were placed the weeks before, yet the 9/11 Commission (Ommission) Report refused to investigate.

Thank you Dr. Eowyn for this informative post. Indeed, as we discussed, your predictions are accurate. Why borrow millions of dollars if you are going to take that amount anyway from the unknowing and innocent public?

Pray that God helps us…….their day of retribution will come, they will have to account to their maker, etc, and He won’t be mocked, so take heart, God’s justice will prevail. None of this comes as a surprise to Him!….Dr. P