What are they pumping into Joe Biden? His hand has a bruise from IV-drip

Yesterday, when Joe Biden visited Kenosha, Wisconsin — after condemning President Trump’s visit — a video of Biden shows a dark bruise with a needle puncture mark on his left hand.

And here’s a screenshot I took from the video (I circled the bruise in yellow):

Tweeters who are nurses and other medical professionals all identified Biden’s bruise and needle mark as the bruising from an IV (intravenous) drip, elderly people’s skin being thin and easily bruised. Joe Biden will be 78 years old on November 20.

Tweeter @MAGABruno1917 alerts us to the fact that there is an experimental drug called aducanomab that is delivered via monthly IV infusions to reduce cognitive decline in patients with early Alzheimer’s, the most common form of senile dementia.

Aducanumab is a human monoclonal antibody that has been studied for the treatment of Alzheimer’s disease (AD).[1] It was developed by Biogen Inc., which licensed the drug candidate from Neurimmune, its discoverer.[2] The antibody targets aggregated forms of β-amyloid found in the brains of people with Alzheimer’s disease, in the hopes of reducing its buildup.[3] […]

A Phase Ib study was published in August 2016, based on one year of “monthly intravenous infusions” of aducanumab, with brain scans to measure amyloid plaques.[12] Phase 3 clinical trials were ongoing in September 2016,[12] but were canceled in March 2019 after “an independent group’s analysis show[ed] that the trials were unlikely to ‘meet their primary endpoint.'”[13]

Despite this, in October 2019 the company announced their intention to seek regulatory approval, following a reanalysis of the data.[14][15][16]

Demonrats’ typical tactic is to deflect from their problems by going on the offense.

No wonder their accomplices in the media, including Drudge Report, babbled about President Trump having had mini-strokes — which both the President and his physician, Dr. Sean P. Conley, have denied.

Unlike Joe Biden, President Trump is lucid and shows no sign of cognitive impairment from strokes or senile dementia. On the contrary, he has the energy of a man half his age.

Mike Pence was never put on standby, & there were no mini-strokes. This is just more Fake News by @CNN, a phony story. The reason for the visit to Walter Reed, together with the full press pool, was to complete my yearly physical. Short visit, then returned (with press) to W.H… https://t.co/GUVdbJRvqD

It’s a repeat of 2016. How come demorats put forth the worst candidates? 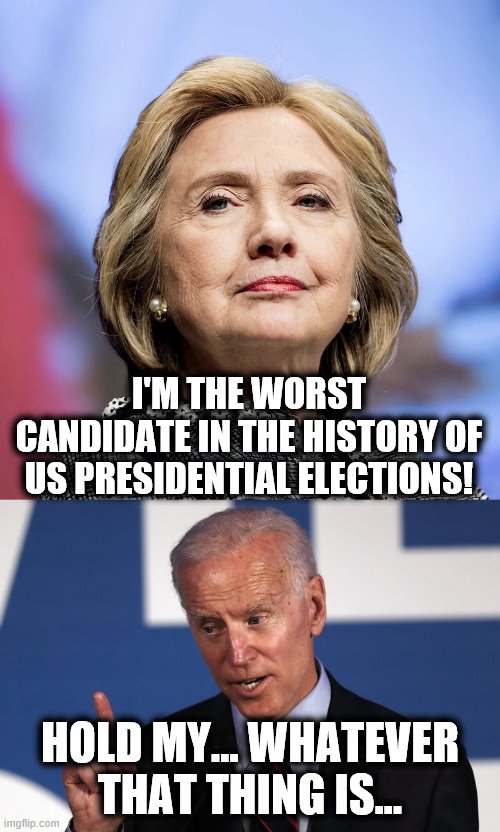 They are all bad….

Because that’s the BEST they have.

And all the heroes of the left are klansmen, abortionists, or murdering thugs.

B/c, DCG…..they’ve been running a “fiefdom” in D.C. of life-time political ruling class candidates….many from the SAME families over the last HALF CENTURY…Kennedy, Clinton, many other surnames in national, state, and local.. governorships and random state and local offices….. TRUMP is a “foreign invader” to their “system” of power that has lasted over a half century or more…..Killery and Biden are some of the last of the old guard that they can put up…..the next generation of Dems….is the radical left “squad” of hatefuls. Stay tuned.,.

The reason is because the worst candidates in the world are the best they have to put up.

Biden sounds SO TIRED. Have you noticed how QUIET his voice has become? Sounds like he’s talking in his sleep. Maybe he IS…….

Uh… you know the thing!
https://www.youtube.com/watch?v=o2knqyMXavM

Joe does the “Old-Man’s Shuffle” up to the podium when he comes out of the basement to speak….OMG, drives me crazy, like he parked his geriatric walker just behind the curtain and shuffles out with his bent-back to grab the support of the podium for the rest of the 7 minutes his handler’s allow him. Also, notice his STIFFLY-held hands….fingers crammed together as tho’ he’s going tho throw a salute? And the thumbs held severely curved outward….what’s with THAT????? Is this the after-affect of stroke? He’s had 2 operations for brain aneurysms… is that another name for “stroke” or OKA… Read more » 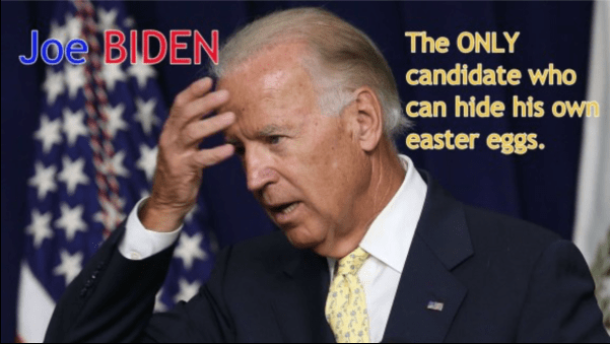 Biden has plugs… there are photos of him w/less hair in the 90’s;)

This makes me wonder if Biden has been trying out this new med in his basement for months. Also, he has had two aneurysms and brain surgeries in the 80’s. And who knows what else;)

Joe is a pioneering medical hero. The first living brain transplant donor.
When asked how he could talk if he didn’t have a brain the scarecrow replyed ‘ there are plenty of people with no brains and they do an awful lot of talking’.

I guess when you’re on camera, you can’t drink the adrenochrome right from the murdered child’s neck. Hillary gets it from that thigh-pump under her pant suit when out in public.

Just seeing that needle mark truly makes me sick to my stomach . . . really, this old guy has to be kept going by infusions! Absolutely ridiculous.