Gallup: Americans continue to name Hillary Clinton as the woman living anywhere in the world whom they admire most, and name Barack Obama as the man they admire most. Clinton has held the top women’s spot in each of the last 13 years and 17 of the last 18, with that streak interrupted only by first lady Laura Bush in 2001 after the 9/11 terror attacks. Obama has been most admired man in each of the last seven years, beginning with 2008, the year he was elected president.

Clinton isn’t the only U.S. politician — or former secretary of state — to appear on the list, although it is her 19th time leading the list. Four percent said they most admire Condoleezza Rice; 3 percent said first lady Michelle Obama; and 2 percent said 2008 Republican vice presidential nominee Sarah Palin.
Massachusetts Sen. Elizabeth Warren and former first lady Laura Bush took the last two spots with 1 percent each.
As for the men, President Barack Obama led the list of most admired men of 2014 at 19 percent — and like Clinton, his was the only name to reach double-digit support.

Pope Francis is a distant second with 6 percent, and former President Bill Clinton came in third with 3 percent. Also on the list of most admired men: former President George W. Bush at 2 percent; and Dr. Ben Carson, Fox News host Bill O’Reilly, Israeli Prime Minister Benjamin Netanyahu and Russian President Vladimir Putin, each of whom received 1 percent.
The Gallup poll was conducted Dec. 8-11 and surveyed 805 adults. It has a margin of error of plus or minus 4 percentage points.
DCG
Please follow and like us:

Don’t believe any of it complete B. S.

Really, I am calling, BS also. They must have their go to leftist list they call. I know of no one that has ever been polled. Never. In fact, pretty much their whole list is crap. This is a conditioning lesson getting ready for 2016.

A Quinnipiac poll, you identify? Their standard “narrative” approach…

“This is a conditioning lesson getting ready for 2016.” Exactly.

If this poll is to be believed, it’s indicative of (a) the continuing stubborn power of the MSM; and (b) willingly-ignorant low-info Americans who only pay attention to the establishment media and ignore the Alternate (and free) Media. Until that changes, we’ll continue to have a country dominated by sleepwalking sheeple.

It’s not the MSM… it’s the State Run Media…

I was a contributor to the Gallup surveys for years. Then they gave a negative report on Obama’s popularity, and subsequently reversed their findings after a “meeting” with Obama’s representatives. Since that time I have had no interest in filling out their surveys.

The test was taken by all the “hands up” people at the starting point of their pointless march so the results are reflective of the dimness of their bulbs. ??

We are so screwed

“What difference, at this point, does it make?”– Democrats will says she’s great no matter what.

Of course, she could just come right out and say “Fly, my pretties!” 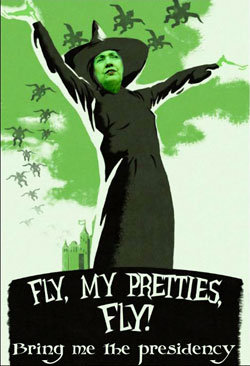 LOL!! How true! And her husband Bill ( the cowardly lion of course) may still be looking for some courage. ?

OH-I just thought of something scarey. Hillary for Pres. and Bill for VP? My GOD-imagine the damage THEY could do!!!

I’m not buying it, as poll numbers are about as reliable as unemployment and economic growth numbers.
-Dave

You mean the Gimment and State Run Media would cook the books??? snark off…

Funny prediction for 2015 by a commenter, donnieboy64, on The Hollywood Reporter:
“ellen degenrous gets caught in bed with hillary clinton. hillary’s poll numbers go up 30 points.”
https://www.hollywoodreporter.com/news/michael-wolff-8-hollywood-predictions-759110

I ran into another very suspicious poll from Gallup, on the poll it was, “Percent of people that are satisfied with the Affordable Care Act (aka ObamaCare)” And it rated the results of 85% in favor of the Act. I even wrote to Gallup stating I know several hundred people, and ALL of them have a negative experience with ObamaCare, so I wanted to know just WHERE did they find all those “positive” numbers from. They refused to answer the question. Adding THIS poll to the list, I’m having a VERY hard time believing in “Gallup” as a reliable source… Read more »