Imagine if this Dominion representative had worked for President Trump’s campaign. The outcry from the left would be non stop.

Yet there is barely a peep about this in the demorat-run media as they must continue to protect their “president elect.”

More from Michigan Star: “Thompson was introduced as a Dominion on-site technician near the beginning of this year. He served as an elections systems representative throughout the primaries and the general election tabulations. His photography Facebook page confirmed that he was a representative for the Dominion tabulation machines during the vote counting.”

Heather Mullins from Real America’s Voice has more details in some of her tweets as to what Aric’s role was as a Dominion rep in GA:

See Heather’s Twitter thread about Aric and his involvement in tabulating the Georgia count here.

As you know, there were plenty of problems in Georgia, which used Dominion voting machines.

What are the odds that someone who worked closely with a VP on the presidential candidate ticket then ends up working for the voting system company tabulating our presidential election? What a coincidence.

New rule: If a person can’t spell (a name), they don’t get to name their own children.

The guy pictured with Kamala looks a lot like George Floyd. 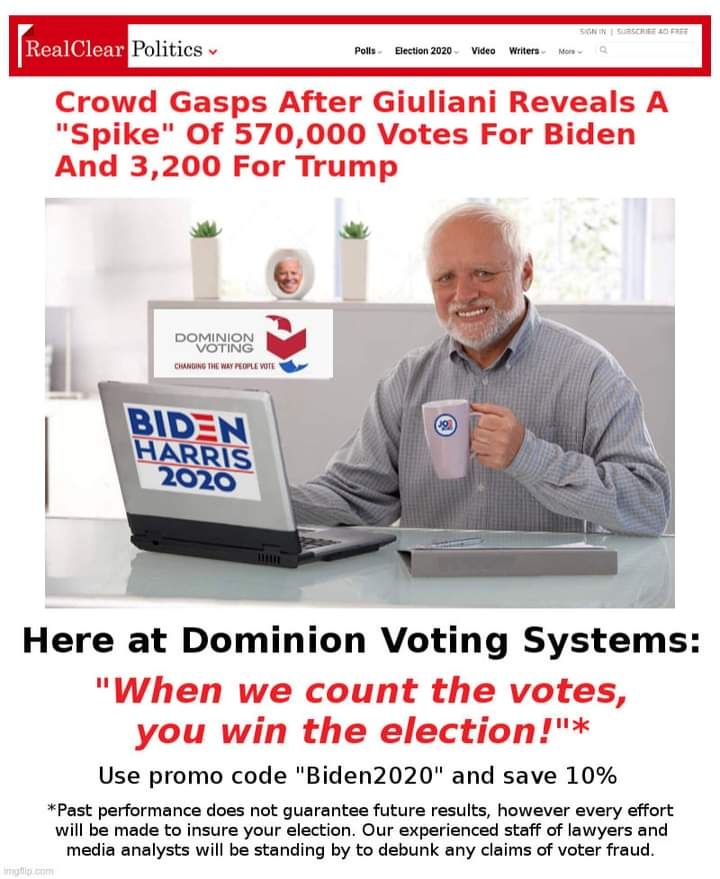 It’s all so incestuous with the left. How very odd!

I used to write application software for a living. Without naming names I’ll just say that I worked in the financial district below Wall Street in Manhattan: the big-time, real world. I’m retired now. Here are some thoughts about elections in general. I think it’s safe to say that the mental image that most people have of the voting process is that, after each voter has been found to be eligible to vote, that voter makes his/her choices and deposits their individual record in some form of locked box that is not accessed by anyone UNTIL AFTER THE POLLS HAVE… Read more »

And why did NV just shut down vote counting all day Wednesday, Nov. 4th? I never heard a reason… maybe for adjustments when the system overloaded?

They are gloating now, but the Lord of Hosts is going to speak soon.

Attorney Lin Wood claims that Communist China bought Dominion Voting just before the election, on October 8, for $400M. Wood and Sidney Powell will speak on this today.

Press conference will be live, beg. at 11am today:
https://rsbnetwork.com/2020/12/live-sidney-powell-and-lin-wood-hold-press-conference-in-atlanta-12-2-20/

*Unlike* America’s Voice on PlutoTV, which is having serious troubles (hopefully just technical glitches).

Just found Real America’s Voice (*and* OAN Encore and NewsMax) are now on the (free) Roku Channel app (gotta search “news”, “all”, then “news & opinion”, “all”) while looking for RightSide Broadcast on streaming services/apps.

Still haven’t found RSB. Anyone know where to stream them besides FB and YT?

On a side note – Kamala still has not given up her seat in the senate. Why not if your so sure you won??