The anonymous “White House insider” who’s been talking to NewsFlavor blogger Ulsterman said that the Democrats are in crisis mode and deeply divided. “Insider” and investigative reporter Wayne Madsen even said that top Democrats are considering invoking the 25th Amendment to remove Obama.
So it is in light of the above that the following op-ed by two top Democrats, Douglas Schoen and Patrick Caddell (both former pollsters for winning Democratic presidential candidates; Caddell was also a senior advisor to the 2nd worst President in modern US history, Jimmy Carter) takes on even greater significance. They say:

I have three words to Schoen and Caddell (S&C):

S&C still don’t get what we Conservatives had known from the beginning (2008):

Obama has neither the personality (he’s a sociopathic narcissist) nor the transcendent moral character to be such a leader. It takes humility and love to see clearly and do what is right for our country, but Obama is neither humble nor does he love God or America. He loves only himself.
S&C are asking for another George Washington who, when he was elected unanimously to be the newly independent America’s first president, quit his party because he wanted to be a President of All the People. But that was never the reason why Obama sought to be president. That’s why S&C’s wish will never come true: They are asking this utterly fraudulent man to be someone and something he isn’t.
~Eowyn

Wow. (Or is that just “eh” today– as odd as things are getting, it’s sorta hard to tell. I’d go for the former take, myself.) Of course, I don’t think he’ll do the LBJ thing and say, “Accordingly, I shall not seek, and I will not accept, the nomination of my party for another term as your President.”

I think this on MSNBC may’ve inspired that…
https://www.youtube.com/watch?v=QDX46Y2w9a8

Well we knew he wasn’t going to unite the country and governing by working with both parties. Any one who thinks this can happen is delusional…
If he runs for a second term, it sure as heck won’t be as easy as the first. If the Rs can put up a decent candidate, he’s toast.

God willing and the crick don’t rise, as they say.

As long as they don’t put up Romney or Huckabee…as much as I like Palin, that would be dreaded as well – SRM would go ballistic!!! Not sure who would be a good canidate right now…

“IS THIS THE CHANGE THAT YOU VOTED FOR?” https://patriotsforamerica.wordpress.com/2009/08/31/is-this-the-change-that-you-voted-for * * * * * * * “BARACK OBAMA AND HIS KENYAN BIRTH CERTIFICATE” https://patriotsforamerica.wordpress.com/2009/07/22/barack-obama-and-his-kenyan-birth-certificate * * * * * * * “MUSLIM BROTHERHOOD “CULTURAL INVASION” OF AMERICA IS UNDERWAY!” https://patriotsforamerica.wordpress.com/2009/07/22/muslim-brotherhood-cultural-invasion-of-america-is-underway/ MUST READ!!! “MUSLIM BROTHERHOOD “CULTURAL INVASION” OF AMERICA IS UNDERWAY!” “ISLAMIC INVASION OF AMERICAN: THE 20 POINT PLAN” “This sums up the Muslim Brotherhood project in America quite succinctly. On November 7, 2001, international law enforcement authorities and Western intelligence agencies discovered a twenty-year old document revealing a top-secret plan developed by the oldest Islamist organization with one of the… Read more »

In order to be “great”, barry soetoro should never have even run for the presidency; as it is, HE IS THIS COUNTRY’S GREATEST HOAX!

I strongly support our president. If he choose to run for a second term, I am behind him 100%. Here is a list of his accomplishments for those who didn’t know. 1. Ordered all federal agencies to undertake a study and make recommendations for ways to cut spending 2. Ordered a review of all federal operations to identify and cut wasteful spending and practices 3. Instituted enforcement for equal pay for women 4. Beginning the withdrawal of US troops from Iraq 5. Families of fallen soldiers have expenses covered to be on hand when the body arrives at Dover AFB… Read more » 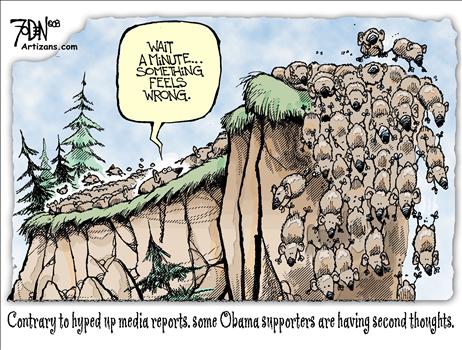 but, alas, poor James is not one of them….

Dude, put down the bong… some exposure to fresh air and events/conditions of last two years might help.