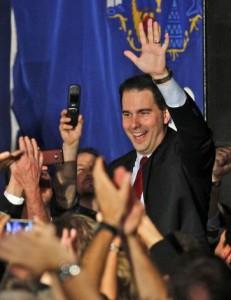 Despite a last-minute smear campaign accusing Scott Walker of fathering an illegitimate love child, the governor’s recall election victory sends a clear message that should resonate around the nation: The fiscal cancer devouring state budgets has a cure, and he has found it. The costly defeat for the entrenched union interests that tried to oust Walker in retribution for challenging their power was marked by President Obama’s refusal to lend his weight to the campaign for fear of being stained by defeat. We’ll see how well this strategy of opportunistic detachment serves in the fall as Obama reaches out to unions for support.
[…] In 1959 Wisconsin became the first state to allow collective bargaining by government employees. The projected cost of supporting Baby Boomer union retirees now threatens to bankrupt the state, as it does many others. Scott Walker ran for office promising change. The fiscal medicine he is administering may be bitter, but it looks like it is starting to work.  The state budget has been balanced.  The unemployment rate has been dropping and is now below the national average. Property taxes are down. Fraudulent sick leave policies—which allowed employees to call in sick and then work the next shift for overtime pay—have been ended. The government has stopped forcibly collecting union dues from workers’ paychecks.
Best of all, the myth that union bosses represent their members’ interests has been exposed as a lie. Now that union dues are voluntary, tens of thousands of union members have stopped paying them.  Membership in the Wisconsin chapter of the American Federation of State, County and Municipal Employees union (AFSCME) has dropped by half. Membership in the stat’s American Federation of Teachers (AFT) is down by over a third. Given unions’ influential role in most elections, the national implications of this trend are staggering.
Walker’s message is clear: The key to bringing balance back to public sector labor relations and balance state budgets is to break the iron triangle of closed-shop mandatory unionization, compulsory dues collection, and oversized campaign donations to politicians that promise to do the unions’ bidding. If other governors take his cue and take up the cause, that giant sucking sound you hear will be the air coming out of union bosses’ bloated political action budgets.
The work in Wisconsin is not complete. The controversial law exempted police and firefighters, a political concession to get the legislation passed. Federal courts have zeroed in on this anomaly, striking down certain sections of the law because they do not treat workers equally. This needs to be repaired— by rescinding the exemption for public safety workers. With the recall election behind him, Walker may be sufficiently emboldened to do just that.

May this be a harbinger for November 6!

Watch out, Obama. We’re coming for you!

Hehe! Watched MSNBC, it was priceless to see their downtrodden expressions 🙂

LOL – I can’t stand to watch PMSBSNBCCCP for even 30 seconds.
I’ll just wait for Noel to post something about it over at NB.
-Dave

Let the nation bleed red on November 6th. Locked, sighted and loaded and the target is the reckless spending that have wrecked our nation.

Giggle, snort: just saw a democrat saying many, many votes aren’t counted yet and when we wake up tomorrow it’s going to be like the headline “DEWEY WINS”…

I guess the dems couldn’t bus in enough zombies to turn the tide.
LOL – Sucks to be them, I guess.
-Dave

That is going to be big fun to watch. 🙂
I bet he will play it down.
-Dave

Ah, but he’ll stammer a lot, completely disproving his own point…

I’m listening to Governor Walker’s acceptance speech. I really like his message. He seems humble and yet strong which are very important characteristics. We can go far if we have faith, family and freedom as our goals. It is nice to feel a little hopeful.

Public unions today – Unions, in general tomorrow – Socialists the next! KEEP ON KEEPING ON!

Time for momentary rejoicing. Now onward, Hoffa and the socialists will be back in full force. Their existence is at stake. They will not go out with a whimper.

Your right about that….

I went to sleep early (big morning ahead) and “hoped” I would wake up to some positive “change!” This is great news!

dan
Reply to  Will

Wooohoooo….roger that Will. They pulled out the dirty tricks in my
Dem controlled county….changed poling stations,imported busloads
of union ‘voters’.
Now the death threats have begun by the sore re-losers….
there’s no thug like an ‘entitled’ union thug

HENRY … I agree… God is in control, no matter what… Faith, family and freedom on our side will get us a win… Bleed red…