This is what happens when school administrators are concerned that everyone receives a participation trophy and coddle special snowflakes. Maybe they should focus more on real education instead of worrying about which bathrooms transgenders should use.

From Daily Mail: Americans students are having major math problems and have fallen behind the rest of the world, a new study has revealed. The latest global snapshot of student performance shows declining math scores in the U.S., while performances in science and reading stagnated.
The concerning findings were part of the 2015 Program for International Student Assessment (PISA) study, which looks into the performance of more than 500,000 15-year-olds across schools in more than 70 countries. Just under 6,000 students took part in American schools.
The top performing country in all three categories was Singapore, while Hong Kong and Macau were second and third in mathematics. Japan and Estonia, and Canada and Hong Kong rounded out the top-three in science and reading, respectively.  The U.S. ranked 40th in math, 24th in reading, and 25th in science.
‘We’re losing ground – a troubling prospect when, in today’s knowledge-based economy, the best jobs can go anywhere in the world,’ Education Secretary John B. King Jr. said after the results were published. ‘Students in Massachusetts, Maryland, and Minnesota aren’t just vying for great jobs along with their neighbors or across state lines, they must be competitive with peers in Finland, Germany, and Japan.’

Math was a stubborn concern, the experts identifying the drop off the result of something that has been building for years. The U.S. average score was 470, below the international average of 490. Singapore topped the math chart with an average of 564. The American score was 12 points lower than it was in 2012 and 18 points lower than in 2009. The tests are based on a 1,000-point scale.
‘This pattern that we’re seeing in mathematics seems to be consistent with what we’ve seen in previous assessments – everything is just going down,’ Peggy Carr, acting commissioner at the National Center for Education Statistics, said.
Andreas Schleicher, director of education and skills at OECD, said the struggle of American students in math was in part due to their inability to solve more complex problems. ‘Students are often good at answering the first layer of a problem in the United States,’ Schleicher said. ‘But as soon as students have to go deeper and answer the more complex part of a problem, they have difficulties.’
Moving away from math, the study also found U.S. students were right around the international average in science and reading. Americans scored 496 in science, compared to a global mean of 493, and 497 in reading, compared to 493. Scores in both categories have remained flat since 2009. The study is the latest to document how American students are under-performing their peers in several Asian nations.

The American Federation of Teachers (AFT) described the results as ‘disappointing but not surprising’. ‘They were predictable given the impact of the last 15 years of U.S. education policies combined with continuing state disinvestment following the 2008 recession. Thirty-one states still spend less per pupil than before the recession,’ AFT President Randi Weingarten said.

National Center on Education and the Economy President Marc Tucker said the test proves the U.S. needs to look at what works for ‘smarter countries’ around the world and adopt those methods. ‘It is critical to look not only at their average high performance, but also at the strategies they use to achieve much greater equity across and within schools compared to the United States,’ Tucker said.
The test is coordinated by the Organization for Economic Cooperation and Development (OECD), and conducted every three years. Schools included in each country are randomly selected.
DCG
Please follow and like us:

As a “Recovering Public High School Teacher” I can tell you stories to curl your hair. It is a shame when you have to read the kids their diplomas when they graduate.
I did 20 years in the US military, much of this time in a combat unit. After retiring, I could only manage to stay 7 years in the public education system.
At least the military allowed me to shoot back.

Isn’t Common Core another factor in dumbing down students?

But… but Play-Duo Skills and Marxist Appreciation are on the rise! 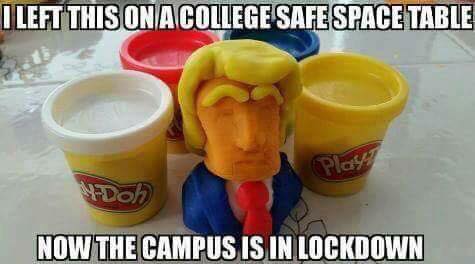 Wow, how depressing but not surprising since the “dumbing down” has been ongoing for decades. I first noticed it in the 1980s from the work of newbies who began working at the office where I was working. Yikes. They couldn’t spell, their sentence structure was bad, punctuation, etc., plus they couldn’t type very well. It’s worse now (nobody in extended family can stand reading anything. Whaaaat happened?!) Would love to hear those toe-curling stories from RLJohnson, above. 🙂 Good for Singapore for being the tops in all three categories. They must be on the ball over there. Here’s a beautiful… Read more »

Here is an example. Twice a year the principal would give a peer review. After sitting in my class for an hour, she wrote the following.
“Sgt. Johnson is grate with the kids. He only made one mistake. He called Australia a continent when it is a contry. ”
The spelling and grammar errors are hers.
This woman has a doctorate in education management.
And we wonder why the kids are stupid???

The just one of the hundreds of stories that I could tell.

HISTORY OF AMERICAN EDUCATION & HOW/WHY IT WENT DOWNHILL It’s not just about money & education policies, as those teacher orgs said. Below is info I put together a full five years ago for a nephew who had gone to college to be a teacher (but when wife & babies came along he switched gears). Even though older info, they are excellent sources for understanding the Big Picture re American Education (hope all links still work!) 1_Book: John Taylor Gatto, “The Underground History of American Education”: Former teacher John Taylor Gatto’s book, also online as ebook: https://www.johntaylorgatto.com/underground/index.htm John Taylor Gatto… Read more »

Globalists and a deteriorating gene pool are the root causes of dumbing down. In less than 10 years, the standard for writing has rolled back from 5th grade to 3rd grade.

Budget cuts from the economy eh…………………
If we are to buy that explanation, can we have the stats from the other countries, and compare the cost. In my county it costs 27,000 per child to teach, and we all know the teacher is getting a very small part of that money!

We home schooled our boys for less than 500 per year. After graduation, each child was agressivly recruited by private schools and universities. Money is not the answer to education.