No one could predict this: U.S. troops at Iraqi base under regular fire

CNN: The 320 U.S. troops at Al Asad air base in Iraq are now coming under “regular” mortar and rocket fire from nearby ISIS fighters, according to Pentagon spokesman Col. Steven Warren. While the attacks are “completely ineffective,” it is raising continuing concern that U.S. forces in Iraq can be kept safe and at least technically out of a combat role, a separate defense official said. The Pentagon would not say whether security measures had changed at the base. 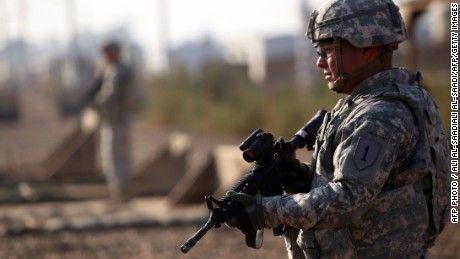 An American soldier stands guard at the Taji base complex which hosts Iraqi and US troops and is located thirty kilometres north of the capital Baghdad on December 29, 2014.

No U.S. troops have been injured, but it’s not clear if any of the hundreds of Iraqi forces at the base have suffered casualties.

Most of the rounds are impacting near the perimeter of the sprawling base, according to the official. The troops at Al Asad are mainly Marines, and are part of the “advise and assist” effort. Since December 20, they have been helping Iraqi units there with learning how to conduct air support, mission planning and intelligence gathering.

In another effort at the air base at Taji, about 170 troops from the 1st Infantry Division on December 27 began training four battalions of Iraqi forces in a new six-week program being run by the U.S. military.

All of the training being developed by the U.S. is in part aimed at getting Iraqi forces ready to be able to fight to retake Mosul from ISIS. While some initial military movements near Mosul by the Iraqis have taken place, it could still be weeks before a full military campaign begins, the official said.

“All of the training being developed by the U.S. is in part aimed at getting Iraqi forces ready to be able to fight to retake Mosul from ISIS.” Translation: U.S. Marine/Army trains Iraqi forces so the Iraqi forces can defect to help ISIS/ISIL/IS take over more towns and territory. Since we did not have the sense to go into Iraqi, take care of business and get out, now we are in a long drawn out war that sees no end and are helping the Iraqi’s help ISIS/ISIL/IS to bring on muslim/islamic/terriorist domination of the world.

What a buffoon of a president we have. He sticks those poor soldiers over there as sitting ducks because his stupid rules of engagement tie their hands. I think this little game ISIS is playing could be taken care of with one massive bomb. Those males ( refuse to call child rapists men) are worthless to this earth anyway so ridding the world of them would truly be a blessing. Besides, I’m sure Hell misses them.

You know, it’s as if history is repeating itself….. In Vietnam, we would be ordered to secure an area, and after that was accomplished (more often than not with casualties), ordered to move out, relinquishing any gains. Later on, we (or other US troops) would get to come back and do it all over again. I have never understood why our troops were ever in Iraq in the first place. All it accomplished was disrupting the balance of power in the Middle East. But, after the country was ‘secured’, we moved out (there’s history repeating itself), and now…… Hey! We’ve… Read more »