“Outside of war and peace, of course, the most important decision you make is the selection of a Supreme Court judge, if you get it,” President Trump said last summer.

January 9 was the third consecutive day of work that Supreme Court justice Ruth Bader Ginsburg, 85, missed after her December 21 surgery to remove two cancerous nodules from her left lung. She had never missed an oral argument in her 25 years on the bench.

News of her surgery had sent the Left apoplectic, with many, like has-been actress Alyssa Milano, offering to donate their lungs and other organs to Ginsburg.

Eliana Johnson and Gabb Orr report for Politico, January 10, 2019, that the Trump White House is reaching out to political allies and conservative activist groups, such as the Judicial Crisis Network and Federalist Society executive vice president Leonard Leo, to prepare for Ginsburg’s possible death or departure from the Supreme Court — an event that would send the Left into a meltdown, as well as trigger another vicious confirmation battle after Brett Kavanaugh’s last October.

A source “familiar with those conservations,” said that the White House “is taking the temperature on possible short-list candidates, reaching out to key stakeholders, and just making sure that people are informed on the process. They’re doing it very quietly, of course, because the idea is not to be opportunistic, but just to be prepared so we aren’t caught flat-footed.”

Ginsburg’s departure from the Court would allow President Trump to nominate a third Supreme Court justice — the most in one presidential term since President Ronald Reagan placed three judges on the highest court during his second term — and enable Trump to create the Court’s strongest conservative majority in decades. The nine-member court is currently divided 5-4 between its conservative and liberal wings.

John Malcolm, director of the Heritage Foundation’s Meese Center for Legal and Judicial Studies, predicts: “It would be a brutal confirmation. The first two were not easy at all, but this would be much harder in this respect: When Neil Gorsuch was the nominee, you were replacing a conservative with a conservative. With Kavanaugh, you were replacing the perennial swing voter, who more times than not sided with the so-called conservative wing, so that slightly solidified the conservative wing. But if you are replacing Justice Ginsburg with a Trump appointee, that would be akin to replacing Thurgood Marshall with Clarence Thomas. It would mark a large shift in the direction of the court.”

The White House counsel’s office and senior aides on the Senate Judiciary Committee, now chaired by Sen. Lindsey Graham (R-SC), have begun drafting a shortlist of potential court nominees. It features judges President Trump has considered for previous vacancies along with some new names, many of whom are women, sources say. The list includes:

They’ll try to reinstate that jewess after her funeral. Can’t have the Supreme Court not being just as (((controlled))) as is the “US” Congress.

“When was the last time the Senate voted twice in less than 24 hours to consider the same bill? They’re doing it right now on S.1, a bill to authorize $38 billion in weapons for Israel and encourage states to deny contracts to people who support boycotts for Palestinian rights.”

I suspect that old Buzzy may already be gone. About a month ago, I leaned over a little too far on the armrest in my car and bruised my ribcage. It hurt for several weeks, and still does if I’m not careful. Ruthie has many years on me! Yet the leftocrats expect me to believe that she has broken five ribs and had lung surgery for cancer; but no worries, she’s a little sore, but she’s a fighter and will be back to work shortly. Who believes this tomfoolery?

President Trump will get a third SCOTUS nomination, no doubt in my mind.

The absolutely BEST part of his election over Killary, among other reasons.

LOL! No. No Democrats. There IS no such thing as a moderate Democrat. Not anymore. AND they’d STILL be beholden to their party. Compromise on something like this is a VERY VERY bad idea–it NEVER pans out for the Right.

I agree…I love Lee, Gowdy, and Chaffetz….but I also agree that if you threw the Dems a bone in the form of , say, Manchin…how could they refuse? Did you notice Trump’s latest nomination for Attorney General? How will they refuse a previous attorney general? I can’t wait to see the ridiculous and far-reaching talking points (they’re already trying) they raise, esp. Harris and her likewise wicked-lipped cohorts/fellow 20120 hopefuls. I want to tape it for posterity. I want to see her face contorted into her ugly, attack dog mug, like during the Kavenaugh hearings and her latest appearances on… Read more »

“There is NOTHING in her background that makes her an American “Black, much less–a foremost authority” on average American lives, thoughts, needs and our illegal alien situation/problem.” So then there’s something else she shares in common with Obama. No wonder the progressive left loves her (or so it would appear; they elected her). I’d like to see her put on a secret service uniform and take a bullet for the president… just to prove her loyalty to America. I honestly don’t see Satan accepting her into his kingdom when her time comes. I can see it now, “No, really, YOU… Read more »

Something else that made my antenna go up yesterday concerning another Supreme Court appointment: Two of the most vile people in the senate, Kamala Harris and Mazie Hirono, were badgering one of President Trump’s nominees for federal judge because of his “Catholic faith”. I suspect they are setting up a case for rejecting Amy Coney Barrett, just in case she is the President’s nominee to replace Ruthie.?

The great Kamala in her previous life…

(with due apologies to James Harris) 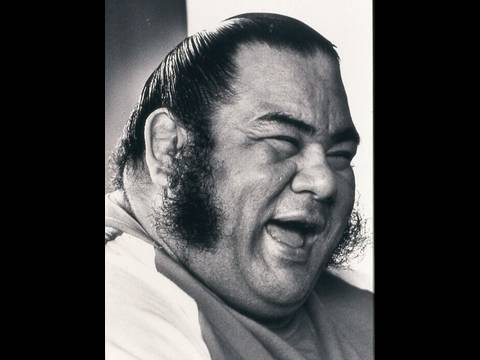 (ok, that’s a Sumo wrestler she honored in Congress)

Yes I saw that. Absolutely sickening. I think they’d better keep a close eye on Ruthie or they’ll have her stuffed like Lenin. Someone should keep putting a mirror under her nose to see if it fogs up.

They’ll do anything to keep her alive, even if she’s in a coma. This is going to be a wild ride. He’d better be up for it. They need to replace her if it takes wasp spray to keep the perverts at bay.

I. Can’t. Wait. Not only will another Trump appointee be WONDERFUL for Liberty and the US Constitution…but it will trigger an outbreak of Democrat lunacy the likes of which we’ve never seen (AND I’m counting the recent Kavanaugh debacle). Hair rending and wailing to befit the most morbid of Greek tragedies! LOL! But they’v already proven that they have no regard for Truth or Justice… for the lives of the innocent appointees they try to DESTROY. I hope the Democrat gambit didn’t work, and that POTUS The Donald can still find someone willing to run the Leftist gauntlet to be… Read more »

The President has had pernicious decisions forced on him before and the stakes with the Supreme Court balance are winner take all. I’m not holding my breath and worried the neocons may persuade him compromising with the Dems on this is necessary for getting their cooperation on national defense. At least Bolton’s just been further exposed as a foreign agent who should be tried for espionage and treason. Reagan dropped his guard and appointed Sandra Day O’Connor, whom Conservapedia has this to say about, “Reagan . . . [made] almost no effort to nominate a real conservative. Justice O’Connor then… Read more »

The sleazy DemocRATs in the House will never approve of anyone who President Trump nominates unless they are a flaming liberal.

Fortunately, it’s the Senate that confirms a judicial nomination, not the House.

The President not only needs to stay the course, but he needs to increase to flank speed, warp 8. Leave the mentally ill in the dust. The POTUS needs to continue to bypass the media and continue to speak directly to the people through social media. Focus on what he’s done to improve the averge American’s and especally the lives of minorities. Remind them what the democrats have done for/to them. Siphon off those voters from the dumbascraps and replace Buzzy Ginsborg and watch their heads explode. And if that doesn”t do it, 4 more years of President Trump should.

It can’t be soon enough…three bouts with cancer and she’s still in there. I do hope to see Amy on the court, that would be the best coup Trump could pull. Save our human babies!

Read Ruthy is working from home, that’s the good news but the bad news is at her age going under the knife bring a lot of set backs, senility, feeble, cantankerous, and hitting the bottle can lead into a rapid deterioration she will have to retire and allow a newcomer take her seat, and bring some conservativism to the high court.

If they get away with keeping her out of sight all they’ll have to do is get somebody to keep the flies away while she mummifies. They’ll never admit that she’s dead if they have to go through another appointment.

Somebody better demand proof and ensure that she’s fit for work or remove her.

Fireman/prophet Mark Taylor has predicted there will be several Supreme Court justices appointed by POTUS DJT. I am expecting just as he predicted.

And let’s remember that Ginsberg has been friendly toward pedophiles, making her an abomination to the Most High.

The commie-lib NAZI baby murderers will keep dragging her in – even if they have to shove batteries up her arse.

For a radical turn how about implementing the laws the Byzantines implemented in regards to “Non-Christians”?

My guess is that just about EVERYBODY she encounters these days are giving her “that look”. Of course she looks like she died YEARS ago and forgot to lie down.

They tried to drag hitliary over the finish line and they’ll try to keep buzzy up there as long as it take to get rid of President Trump. Think weekend at Bernie’s.

They will try to keep Ginsburg on the bench even if she is dead. they will say that she is sleeping.