To noone's surprise, Angela Merkel is reelected to 4th term as German Chancellor

On September 8, I predicted that Angela Merkel will be reelected German Chancellor.
To no one’s surprise, yesterday’s election indeed re-elected Merkel — for whom patriotism, nationalism and the German flag are bad things — for a fourth term.
[wpvideo 3YNlCrV2]
But there are two interesting results of yesterday’s election:

AfD’s platform is anti-immigration — what it calls “an invasion of foreigners” into Germany. AfD co-leader Alexander Gauland said, “We want a different [immigration] policy.”
And no wonder.
Only one-in-five of Merkel’s immigrants actually work.Of a million asylum seekers who have come to Germany in recent years, only a fifth has acquired some kind of employment, according to the Swedish news site SVT Nyheter (via Gateway Pundit). That means 4-in-5 or 80% of “migrants” in Germany are on welfare. (It’s even worse in Austria: 90% of “asylum seekers” in Austria are on welfare.)
But AfD’s rising popularity may be too late. Given the number, youth and predominantly male Muslim migrants, Germany will be a white-minority country in one generation.
~Eowyn

The election is rigged. No surprise. Too bad they don’t have term limits.

I read an article recently that the showed Merkel just too close to predict a winner when up against the new national party. It made me wonder how when they were both around 40% of the total votes that Merkel could pull out a victory . . . without resorting to vote manipulation. I would not put anything against Merkel. 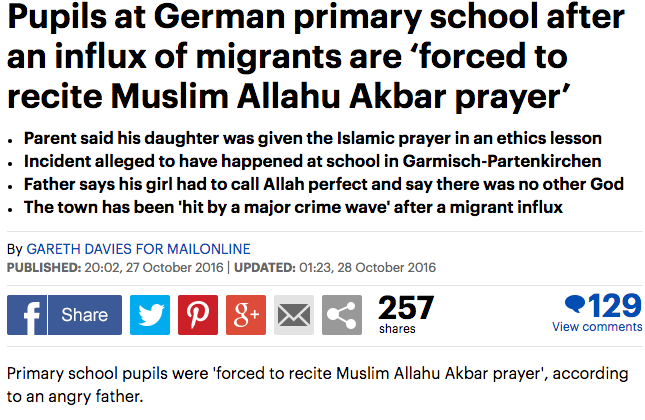 I bet they don’t recite the “Our Father” too.

The Wicked Witch of the East has been bending her knee against the German flag most of her life. Seeking Global laws and economy, Sharia and Marxism. Marxism, desired by some (not all!) of the “elite” to subjugate everyone except themselves into a world where everything possible can be wrung from those beneath them and then disposed. Gulag, concentration camp.

When the muslim takeover in Germany and other European nations is complete, I wouldn’t be surprised those remaining WWII concentration camps will be re-opened and used as “reeducation” camps for political and religious dissidents.

Angela Merkel should stand trial for crimes against humanity in her quest to destroy not only Germany, but Europe, also. So should her masters, the British Crown and the Rothschilds. Mark my words: The demographics of Europe have changed forever. Merkel is not to blame (at least directly) for the wave of contraception and abortion that has swept the world for the past 55 years, but she is directly responsible for ushering in the political changes based upon that. It is to be expected: Sometimes a politician can do a thorough job—as Merkel is doing in destroying Germany and Europe—but… Read more »

Makes me wonder what the people of Germany really want. Are they tired of living in freedom to travel and shop without being attacked? Do they accept the government taking their houses, they worked a lifetime for, and giving them to the invaders? Do they think it is okay to lose their traditions and culture forever? Or was this election just another rigged one we have been told for years is happening. Are they okay with the spending of hard earned tax money being wasted to support millions that have no intention of ever carrying the load instead to being… Read more »

I’d say the vote was rigged, considering what’s at stake. Also, the citizens don’t vote directly for a president, they vote for the party that will vote for the president, the more your party takes seats in Bundestag, the more votes for that party’s candidate for pres. AfD is scaring the nwo/eu though, and that’s a good thing.

They have been infected with the Swedish disease:

How does a nation function with a leader who is supported by 33% of the voters?

In 1933, Adolf Hitler too became Chancellor with only one-third of the votes, when his party, the German National People’s Party, was voted the majority party of the Reichstag (Parliament).

Reblogged this on Octavpelin's Weblog.

I also think her re-election was rigged. After Trump’s win, those that count the votes realized they had to do everything in their power to ensure another Trump-type upset wouldn’t occur in our lifetimes.
I dunno if Geert Wilders actually won, but my gut feeling, is that Marine Le Pen actually did win. In Angela’s case, I thin kthere were enough stupid krauts to make her victory plausible, as evidenced by all of the rapefugee support the libtard krauts gave them.