This is Chiraq: More than 100 shot over Fourth of July Weekend

From Yahoo: The United States celebrated Independence Day with a long weekend of barbecues and fireworks, but in violence-plagued Chicago more than 101 were hit by gunfire, with 14 dying of their wounds, the Chicago Tribune said on Wednesday.
The youngest of the victims was just 13 years old and the eldest 60, the newspaper said, noting that the shootings were concentrated in the south and west of the country’s third largest city.
The heavy toll came after President Donald Trump announced on Friday that he would be sending federal reinforcements to tackle chronic violence in Chicago, where local police forces were slammed for abuse in a federal report put out last January.
The long bout of holiday violence began on Friday and ended in the early hours of Wednesday, July 5. The holiday started off relatively peacefully but violence quickly escalated on Tuesday afternoon, when 41 people were shot in just 12 hours.
Violence in the city has drawn a great deal of media attention because it is where former president Barack Obama worked as a civil rights attorney and law professor and where he still maintains a high profile.
The rate of violence relative to the size of the population is, however, lower than other US cities such as St Louis or Baltimore (well, guess that makes it better…sarc).
DCG
Please follow and like us: 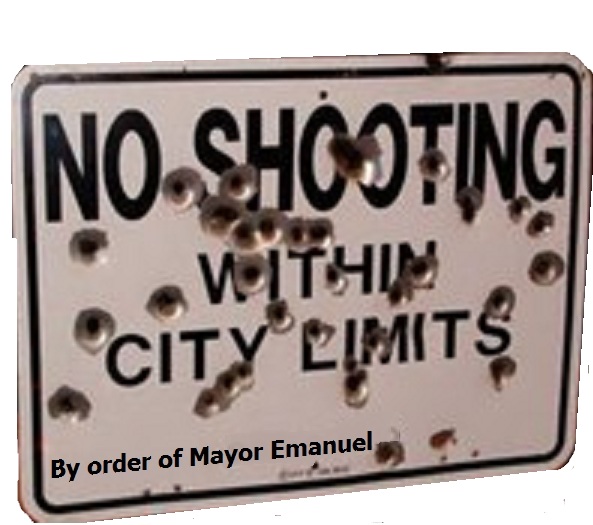 The proof that gun control is actually victim disarmament is in Chitcago headlines every day. I don’t know how much easier I can make this to understand; criminals by definition do not obey law. So when anti-gun measures are enacted only law abiding citizens will comply. This leaves two classes of criminals in Chitcago, criminals in office aka politicians who vote to disarm law aiding citizens, and criminals out of office aka murderers, rapists, robbers, muggers, gangs. The common goal of both types of criminals is disarmed victims. The only difference is in the size of their territory in wich… Read more »

Oh I think they are getting what they desired in the first place, disarmed victims and anarchy. They’re not ignoring it they’re throwing gas on the fire. As an IDF soldier, Rahmbo knows the best friend of the IDF soldier is a jewish settler with a gun, wich is why Rahm is completely against armed law abiding US citizens – he and his cohorts know what they’re doing. When you hear an informant relate how his gangsta boss called him up and told him what alley to find the crate of guns and ammo in and he finds them just… Read more »

I guess THIS kinda loops back to the “Liberals qualify as Domestic Terrorists” concept.

Chicago, Chieftain Mustafa Obama’s [ residenceship] has been running amok and the murder rate in the upswing while he was living it up in DC. Last Gay Pride parade ITS were completely naked, parading, displaying their pride in being society’s refuse, meantime Chieftain has been sporting a “redish tan”, looking rested, showing his spiffy pretty boy look, and ex$$$$pensive outfits, and…….. on a whirlwind tour around the world before PRESIDENT TRUMP’S arrival. I wonder how much hate he is spreading while ghetto blood spills all over Chicago.

Alma . . . I could not agree more, particularly with . . . ‘ {Obummer} on a whirlwind our around the world before PRESIDENT TRUMP’s I wonder how much hate he is spreading while ghetto blood spills all over Chicago.” It is the height of gross behavior on the part of this fool preceding the visit of our legitimate President at each world wide stop. My blood boils over his antics! I had hoped that this horse’s _ _ _ would stop being the center of world wide news once his term in office was over; but NO, he… Read more »

I think its ironic that this is where those ex-slaves fled to be rid of Southern oppression. Any of them would be safer in the South. Just like its sister, Detroit, the largest part of the city is ghetto.
Same thing happens in South Africa. I suppose “it is what it is”. Rahm get to the bathhouse and Chicago burns.

In the future I wonder if 0bama will be removed from federal documents and school textbooks, kinda like how the ancient Egyptians removed Akhenatun from statues, hieroglyphs, etc as a despised ruler. You know, like how Stalin had top soviets that fell from grace removed from official photos?

I think he’ll get the Atenhotep treatment. They’ll deface his statues and bury his “library”. My guess is that no one will do anything to the smarmy little agent from the New World Odor. He’s a disgusting POS.