Mike Isaacson is a 29-year-old adjunct professor at CUNY’s John Jay College of Criminal Justice.
Mike Isaacson is also a communist, an advocate of violence and an Antifa domestic terrorist who, in a tweet on August 23, 2017, mockingly said it is his “privilege to teach future dead cops”.

For that, John Jay College rightly placed him on “administrative leave,” although it did take the college administration 23 days to do so. See “Antifa professor Mike Isaacson who wants cops dead put on administrative leave“.
But Isaacson’s “future dead cops” tweet was no isolated incident. Searches of his Twitter feed uncovered (New York Post):

Below are pictures of himself he posted to FetLife. To call Mike Isaacson severely disturbed is an understatement.

Just think:
John Jay College of Criminal Justice saw fit to hire this debauched creep to teach students who plan careers in law enforcement.
How does Isaacson, at 29 years of age, manage to find the time to pursue this dizzying and revolting panoply of sexual perversities while teaching college? But then, we are told the Devil never sleeps . . . .
Here’s the phone no. of Karol Evans, the president of John Jay College of Criminal Justice: 212.237.8600
Here’s a petition to fire Mike Isaacson:

This PUTZ professor will beg for a cop when he experiences a home invasion at 3 in the morning.

Wow. What a sick, disturbing, horrible human being. I wonder what his upbringing was like? Sometimes that doesn’t matter. He could’ve been raised in a good religious home, had both parents raising him. But that black demon was festering inside of him since birth. Such a shame. This world is out of control, in so many ways. Putting him on administrative leave?! What a joke! Fire his ass. We are so lenient anymore. We are a weak country. Why? Because we want to make sure everyone is comfortable and being pleased. We no longer stand for anything. NOTHING! Therefore we… Read more »

“Good bet that this twisted anything goes sexual little punk is all in for…not allowing conservatives to speak.”
No need to bet. Isaacson is a founder of Antifa. Not only does he advocate not allowing conservatives to speak, he justifies the use of violence against the “Alt-Right”.
https://fellowshipoftheminds.com/2017/09/21/antifa-professor-mike-isaacson-who-wants-cops-dead-put-on-administrative-leave/

Does he hate himself? His parents? Or just his Creator?
Wonder if he’s “curious” about normalcy?
I say, indulge him in his wonderment about waterboarding.
I hear it can be quite cathartic, purging, cleansing…
life-changing. Oh wait, that’s exorcism. Anyway.
I still think it warrants a good trial.

Eww, he is disgusting! Yesterday when I saw his picture I thought he looked like the kind of pretentious professor that would use his “intellect” to try to impress and seduce naive young college girls. I had no idea then the extent of his depravity. GROSS!!

How did he get hired in the first place? Do they not do background checks? I wonder if he has a criminal record? If anyone knows how to find his birth date, I can check to see if he has a record. It would be interesting to know.

After seeing an interview with him on one of the alphabet channels, we were like WOW, he is seriously disturbed. He had a lot of makeup on, very distinct eyeliner, and his bangs covering one eye. He has a very long neck and looks like a llama. This is seriously disgusting. I hope this goes viral. Ewww, the word viral associated with him…..blah ! He’s a creep !

So giraffe boy is even sicker than we thought, eh? All we need now is the email address for the head of John Jay College… We could literally have the privilege of teaching a future psychopath-firing college dean!

I can’t find John Jay College of Criminal Justice president’s email address, but here’s the phone no. for the Office of the President: 212.237.8600

Nice to see this is a “diverse” school.

What a well adjusted human being.

If he’s actually participating in that list of fetishes, I predict he will live a rather brief life.

I witnessed a lot of criminal activity in education, on the part of the adults, as I have shared in the past. Education seems to attract certain criminal elements for a couple of reasons. First, the “hallowed halls” or milieu of education seems to provide a cover, in that people expect a school to be a sanctuary of sorts. But, more importantly, Second, in education, the criminal gets to REASON about his criminal activity. Albert Camus has warned us, “When crime begins to reason about itself, it assumes all the rigors of a syllogism.” And make no mistake: Rare is… Read more »

Nice write up. Yes, that IS what Satanists do. They trade eternal bliss with God for whatever temporary pleasure they can imagine here on Earth. So, they take their “do as thous wilt” to extremes in order to “get their money’s worth”. It isn’t called the “Synagogue of Satan” for no reason. As Christianity established the morals for Western Civilization, the Talmud, written for the precise reason of attacking Christianity, established their guidelines for their perverted lives. So, am I surprised by this worthless, slime-dripping creature? Not at all. The only surprise is that a university would allow him to… Read more »

This POS is actually a classic. This guy looks like you could catch something by just looking at him. Who said the tribe never mates with Alpacas? 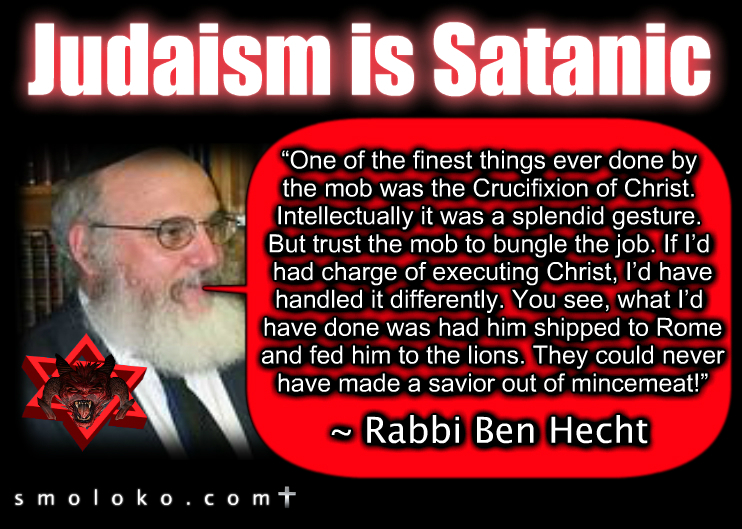 That quote by the rabbi couldn’t be more viscious. Sadly it is only one of hundreds out there that are equal in their venom….. all directed towards a man who loved unconditionally and healed the sick and blind. I truly wonder…..do these people carry some sort of mental virus, or are they all generationally demon possessesed ? Hard to believe that even this much hate could be taught.

I’ll go for Door II. Of course Option I is a product of Option II.

Just looking at this guy gives me the creeps. His perversions will be his downfall and providing the college info is great. I hope the President follows through and just fires him, period.