Who shot the Texas jihadists?

It wasn’t any one of these guys

“(CNN) They wore body armor. They carried assault rifles. And one had declared loyalty to ISIS…”

None of these guys shot the jihadists

“A traffic officer working after-hours as security for the event and armed only with a service pistol killed both men, who were wearing body armor and carrying assault rifles, Garland Police Department spokesman Joe Harn told reporters Monday…”

It was one man with a hand gun

Never underestimate your ability to make a difference.

Shootings like this will be become so common that they will no longer make the news. There is only one way to take down a bad guy with a gun and that is a good guy with a gun. Our leaders are trying so hard to ruin this country and our Congress sits on their laurels and do nothing. May the Lord have mercy.

Godly individuals with Judeo-Christian values made this country great, and they will keep it this way. Pamela Geller is saving lives by drawing the needed line in the sand now. Murder by Islam abounds today, but preservation for our Godly and humanitarian way of life will come at a greater price tomorrow.

I was assuming it would have been one of the SWAT guys with body armor and an AR-15. What great encouragement to read that a humble traffic cop with a hand gun took them both out.

Not only is he courageous, he’s a great marksman. Reportedly he shot the jihadists right in the head.

That’s pretty much the only part they can’t protect with body armor. Kudos to him for not ONE,but TWO great shots!

No. He is of Scottish descent and couldn’t stand to waste ammo. Did you know that in WW2 on average it took the US 250,000 rounds expended to kill one German/Japanese, but don’t feel too badly, as it took the Germans just over 200,000 rounds. Automatics waste SO much! I just read this from a war buff on quora.com yesterday.

The M1 was pretty accurate.

Granted, within its range. But my main point is a good marksman stays calm and does just as what the cop was superbly trained & conditioned to be: a true warrior, and I love him for it. I’m sure he’s laughing about my remark re the Scots, too. Last October, when I lost most of the vision in my R eye, my best one and what I used for firearms and archery, as I’m 20/400 in my L, hopeless unless the target’s 3 feet away, I understand this stuff pretty well. Hell, I joined ROTC just so I could get… Read more »

“Authorities are still trying to determine the suspects’ motives”… Silly, they just want some jobs.

Was it real, or was it memorex?
Just how much of what we see or hear on main stream news can we, or should we believe, any more?

Kevin, we MUST answer this outrage as if it really happened!

It is VERY easy to tell if something is staged or real. Watch the news. If they all say the same thing, hitting their talking points right on the mark… it was fake. Look at Sandy Hook. They all corrected themselves at the same time and they all made the same mistakes before the “official” story was put forth.
This is about as real as it gets. CNN was so far out of the loop, they digressed to attacking free speech to make a story without the facts.

Wow, what a great response!
Everything you say is all too, too true, especially since Operation Mockingbird started WAY back under Truman, I think it was. I read on the Internet a few days ago that it never really went away, and its budget was just increased by a mere US$ 50MM more a year, as We the Sheople are certainly worth it!

EXCELLENT point, Justin/3% !
For anyone who don’t think network and local TV news stations have an identical script:
https://fellowshipoftheminds.com/2015/02/09/whos-writing-the-script-for-tv-news-across-america-2/

We now live in the land of lies, Luciferianese spoken here. The control of MSM is above whoever may be at 1600 PA Avenue, and the biggest hit to truth in news came from the FCC change of the Telecommunications Act. Media ownership became monopolized, in large measure due to David Rockefeller, the CFR, and his power over appointment of people in behind the scenes offices such as the FCC. That explains the choices we make in dreadful elections that get worse every two, four, and six years. The internet and blogs such as FOTM must be saved.

I think it was in one of the Dirty Harry movies that Clint Eastwood said something like “I don’t mind some shooting, as long as the right people are being shot”.
In this case, clearly the right people were shot for a change — I’m sick to death of the muslims walking around like the whole world is their personal target range, and that the targets can’t shoot back!
Two thumbs up!
🙂

A good individual policeman accomplished it all without lockdown of Garland and other communities. No armored SWAT teams sent the people to the street with their hands up and at gunpoint. Such American policemen strike terror into the hearts of tyrannical UN globalists.

If all cops were like this one the trouble would come to a swift end, as it should! I’m tired of wasting money on criminals that keep going through the revolving doors, of our BROKEN judicial system, it is a JOKE. It is all about lawyers, judges and money and how gets the biggest pay-off! Semper Fi.

Thank you for your Service! My father was a US Marine! You are correct about criminals and the revolving door – of our BROKEN Justice system – involving lawyers, judges, and money = who gets the biggest Payoff! It is all about THUGS – and Thugs w Briefcases – and Thugs w Robes. Sometimes it involves thugs w badges and guns participating in incidents of WITNESS INTIMIDATION or the Cover Up to WITNESS Intimidation – and Elderly Abuse – so that Career Criminals can have FELONIES dismissed – when their Victims are targeted after reports to police and charges are… Read more »

And “they” want to Nationalize THESE guys?? THIS is why they MUST NOT accomplish that “goal”.

I don’t see ourselves broken yet. That is the objective of America’s enemies, and they want us to believe that so that we will quietly surrender. There are many great Americans in all areas of life willing to stand for our country, a nation of individuals living in distinct, separate states with common basic values.

And THAT’S why we can’t allow the Leftist/Progressives to screw with our Second Amendment RIGHTS!

MA in MO
Reply to  truckjunkie

Dittos! And we had better make sure there is no one hiding behind every blade of grass!!

To the sub human pond scum mudslums… “Welcome to America … and keep an eye on ALL the blades of grass! 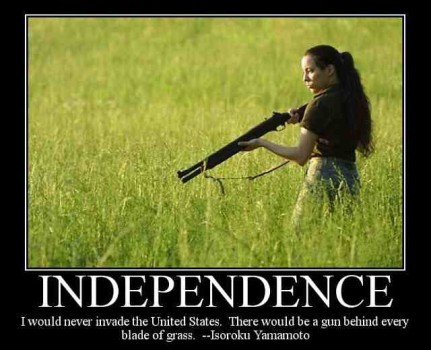 Who is this man who shot and killed both terrorists? Where is his picture? Where are his words to the public after saving everyone’s lives in the building? Also, from CNN “In addition to the officer, who used a .45 caliber Glock, four SWAT team members with high-powered rifles also fired at the suspects,” I’m curious who payed to have security as well as the SWAT team on standby during an “art” event? “They struck in Paris and Copenhagen recently, and now in Texas.” -Pamela Geller from CNN We all know about the Paris “attacks”, there’s a lot of talk… Read more »

Very good thinking on your part re the false flag aspects. I think it was fortunate that a cop w/excellent training was able to stand his ground, stay calm, and do the necessary minimum, BUT the fact is we don’t know if these two were patsies sent in on yet one more black op. It’s getting difficult to reference and cross-check all of them since the first attack on the WTC [for those who can recall THAT doozy!]. WAY too much corruption at the very highest levels, as well as by the powers behind the thrones.

We’re all just crazy for not believing everything we’re told, Joseph. It is our job to question things that don’t add up, and we are destroyed for it. The truth will come out eventually.

Your comment reminds me of Harrison Bergeron short story written in 1961
https://www.tnellen.com/cybereng/harrison.html

I remember reading somewhere the Cop was actually off duty when this happened;he just happened to be nearby. That information may have changed….

I remember the first WTC bombing during clinton and the 2nd during bush…yes, it didn’t fall the first time, but definitely fell the 2nd time

MA in MO
Reply to  MomOfIV

“Authorities are still TRYING TO DETERMINE the suspects’ motives, U.S. Secretary of Homeland Security Jeh Johnson said Monday…”
How many deaths have to occur before our leaders stand up and say; “this was an act of terriorism done by muslim/islamist/terriorist whose objective is to kill as many infidels as possible?”

Authorities are changing their story.
Investigators now say the two suspects, Elton Simpson and Nadir Hamid Soofi, were shot dead, but not by a single (unnamed) traffic officer as was originally stated by authorities, by by heavily armed SWAT Team officers.
https://21stcenturywire.com/2015/05/17/garland-shooting-event-revised-shining-a-spotlight-on-fbis-role-before-attack/
H/t FOTM’s Gingercake

Muslims in Minnesota want sharia law in America; approve of killing those who insult Muhammad -

[…] This man (below), in sympathy with the terrorists, says: “You commit suicide. You don’t care because you, your heart is tell you ‘I don’t want to live no more,’ because you couldn’t take that much hate or you kill someone.” Agreeing with him is this woman (below), who also thinks it’s “right to kill somebody who insults Muhammad,” referring specifically to Pamela Geller who had organized the Muhammad cartoon exhibit in Garland, Texas, where two Muslim jihadists were killed after they opened fire on May 3, 2015. […]