The Left devour their own: MSNBC mocks Pelosi-Schumer rebuttal to Trump’s border speech

MSNBC is part of the MSM or Hate America Media.

So it is of some interest that MSNBC made fun of the response by House Speaker Nancy Pelosi (D-CA) and Senate Minority Leader Chucky Schumer (D-NY) to President Trump’s national address on border security last evening.

On Tuesday night, an MSNBC panel had some fun at the expense of Speaker Nancy Pelosi, D-Calif, and Senate Minority Leader Chuck Schumer, D-NY, for their response to President Donald Trump’s primetime address from the Oval Office.

MSNBC anchor Brian Williams took note of the memes Pelosi and Schumer’s rebuttal birthed with many people comparing the Democratic leaders to angry parents and the classic American Gothic painting.

“I don’t think they [Pelosi and Schumer] wanted to do it. I don’t think they should’ve done it. And I guarantee you at the staff meeting tomorrow morning, somebody is gonna get, you know, chewed out pretty good about this whole thing. I’ve been more excited about colonoscopies than he [Schumer] was giving his speech tonight. He didn’t want to be there!”

Note that the globalist monster is only devouring the old, stale, leftover “moderates.” Their new, far-left darlings, e.g., Bug-eyes Ocasio-Cortez and Islamist Rashida Tlaib, spew on and on and receive daily kudos.

LOLROTF. Pelosi and Schumer stepped in it this time. Trump is a genius. Now that it’s no longer “business as usual,” they’re beginning to sweat!

The rebuttal speeches of both these individuals was absolutely ridiculous. They looked like a couple of oddballs. Schumer needs to consult a plastic surgeon regarding his drooping eyelid–it is extremely distracting to have to look at him. There was nothing that they said that was worth the time to watch them.

The fact that they *had* a rebuttal was crazy to me. And it kills me! I’m Canadian, and the next morning I hear my officemates grumbling negatively about Trump’s speech. How strange is it that the democrats were offered a stage for rebuttal? Freaking George W. Bush went to WAR over bullsh*t WMDs with no rebuttal whatsoever, yet they are pushing the opposition, because of a border wall (which, BTW, was eloquently sold to me by POTUS). How weird is that? Honestly, even if you are anti-Trump does that not seem a little bit weird to you? (Please correct me… Read more »

That’s because the “press” is leftist propaganda. The Odor runs the whole thing. Trump is the designated target. The idea is to make people so sick of “government” that they ASK for The Odor.

They are not going to “announce” the takeover. They have simply assumed control. Unless and until someone takes it away it will only get worse.

Take heart, its his last year (I think): 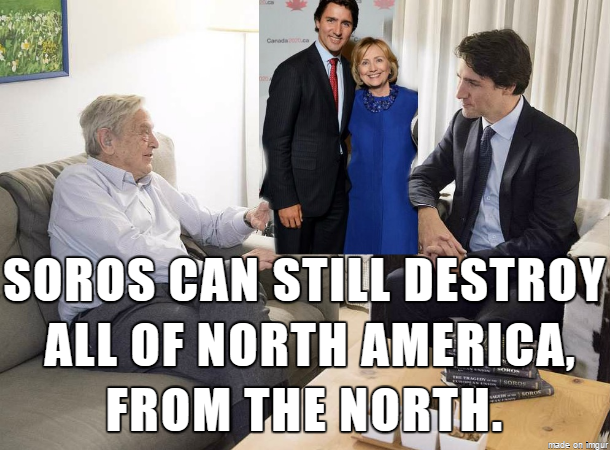 Two of a Kind

The question I have for Carvill is who has such power they could order Pelosi and Schumer to stand there like Tweedledum and Tweedledee reciting their lessons.

Great observation Dan. I believe (((Kalergi-ite )))George Soros is an agent for the satanic Rothschilds, like the Warburgs were who financed the “splintering” of Judaism & of course the masonic “Zionism” and helped to create the holocausts of WWI & II of our peoples. Kissinger was another agent of theirs

Chancy Schulosi looked like a moron standing there behind one slim podium! LOL!

All I can say is that Trump should close the border and order the troops to build the wall, now. Enough “dancing with the stars”.

Notice how tight the President’s speech was. He gave the opposition absolutely nothing to use, no ammunition to distract the viewers, or try to confuse the subject. There was no personality, no slick delivery, no attempt at warm, winning, charisma, or persuasion. There was just only that, which everyone already knew, a straight forward description of the catastrophic and worsening situation at the border, the senseless, human tragedy, a sincere concern for provision of safety for the American people and yes, what is obviously the very preservation of America itself. Nancy and Chuck, short a pitchfork, crammed into a narrow… Read more »

Close the border, build the wall and issue orders under the “Emergency Powers Act” that the seditious “news” shuts up, now. They are openly out calling the President a liar today. There is a difference between disagreement (if that’s what it really is), and insults and seditious incitement. Trump sits there surrounded by those who should be providing their expertise to derail this nonsense. I don’t know if they are but they should. I think he has too many quislings in his administration and no one to ensure that what he says gets done. Many are openly defying his direction.… Read more »

And not even minimally believable.
https://www.youtube.com/watch?v=0Nhk3sx1LhQ

Glad I didn’t watch it – I just downloaded youtube clips, and converted them to mp3 – there was about 15 minutes actual speech & rebuttal, wrapped by well over an hour of bloviating, know-nothing pundits & commentators.

Twitchy’s take on the “Dynamic Duo”

I couldn’t stand listening to either one of them – I had to pause the rebuttal 6-7 times, and it was only, what, 5 minutes long?

Both of them were absolutely full of it, and Nancy showed why she should be called “LOUDSpeaker” of the House (/sarc). She spoke soooooooo softly it reminded me of Officer Hooks from Police Academy:

They are treasonous scum. Worse, they are total hypocrites. There are multiple recordings of them both stumping for the wall. In fact, Sparky Bush signed a bill that funded about $10B for wall construction. I wonder what happened to that? It probably went to the Obongo “library”.

The longer this drags on and the more mileage they get out of it the more it reinforces the false notion that he needs their permission. Their collective position is that Trump caused this. It is the opposite. Remember, he’s saying this is a security or “national threat” issue. That implies that the leftists are either telling him he’s crazy or that they don’t care. Either way, how can anybody be President if Congress is not going to cooperated during an emergency? So, every day that clicks by they keep hammering their line. Trump comes off powerless and they keep… Read more »

“It doesn’t help that his administration seems to consist of various players with their own agendas. The whole thing is infiltrated.” So is his own party in Congress. Glad we’re finally rid of the AZ delegation in the Senate. Next to be off-loaded? Murkowski. Then maybe Collins… And if the majority of the Democrat representation to Congress were suddenly vaporized, I wouldn’t shed a tear, either. I honestly can’t understand how most of them get elected. Who, in their right mind, would vote for them (or cheer like banshees when they say and do ridiculous, un-American and un-Godly things —… Read more »

I agree. It doesn’t help that this brain-washing is a form of political advertisement as well. It doesn’t even get counted as such but its there, every day.

It’s like getting free campaign ads. As time goes by these things are getting uglier and uglier. They are already way past anything that’s gone before.

All of this constitutes “hate TV”. They are conditioning the weak-minded to be hair-trigger emotional lunatics.

Instead of a podium or lectern Pelosi and Schumer should be sharing a gallows. The idea of both of them twisting on the end of a rope soiling themselves is appealing. President Trump gave a great address and those 2 talked like they had a stick shoved up their asses.

As a democrat I was embarrassed by their shameless response.
It was vengeful and disappointing.

I thought they looked very robotic. Perhaps Kalergist George Soros forgot to wind them up enough before presenting them with their script which was a failure as Rush Limbaugh noted.

Time for the POTUS to ignore them. Just do the job. They’ll try anything and everything to stop him. He needs to do so much stuff that they can’t keep up. They’ll be 10 Crisis’ behind. Call the news out even more than ever.

I watched this on PBS (the address, Dem follow-up, and analysis), trying to avoid the vermin on network TV who make me cringe with their every word.

What surprised me was the lack of a GOP reply to the Dem response. What gives? Not even a moderate Democrat weighed in (um, Joe Manchin?)

This is why Pelosi & her lap dog need to be called out. Trump should have exposed them last Tuesday night in his speech. Last year in the 2018 OMNIBUS Bill, the Dems/GOPs embedded a $500 mil for the country of Jordan so they could build a concrete wall 287 miles long to seperate their border from Iran. We The People paid for it. Pelosi and her dog Chucky hate this country but they will approve money to keep the Jordains safe from Iran. This country doesn’t like us either but they have to have OUR money to keep their… Read more »