The Democrats’ Existential Imperative for (at least theoretical) Impeachment

Impeach President Trump for Russian collusion; for emoluments; for obstruction of justice. Now for Ukraine (and Australia and China and then (?). Adam Schiff and his fellow Democrats and Deep Staters’ impeachment jihad could be viewed as obsessed, crazy – perhaps even comedic, as they (and Adam Schiff in particular) increasingly resemble Wile E. Coyote futilely chasing the Road Runner.

But even crazy and obsessed people can be rational in their machinations. What if the Deep State swamp crocodiles fully recognize that it is unlikely that they’ll succeed in removing President Trump from office through impeachment, yet still persist? Is there a method to their madness? Yes.

True, they desperately want to take out President Trump, and dare not rely upon the electoral process plus whatever voter fraud they can muster to accomplish that for them. So impeachment is their offensive element, and remains their best-case scenario. Still, after Mueller belly-flopped, they must have finally realized (if not before) that a successful impeachment and removal from office is highly unlikely, if not impossible.

But there is also a defensive element. They have to surmise that Trump’s declassifications, and (let us pray) DOJ indictments will occur between the release of the Inspector General’s report and the 2020 election. So they also require a defensive strategy well before the election. The Democrats can, and are, simultaneously playing both offense and defense.

As they’re wont to do, the Democrats have been accusing their adversary of doing exactly what they themselves have been up to. Some have referred to this as psychological “projection.” It could also be “turnspeak” – the propaganda technique involving (falsely) accusing the other side of doing what you’re actually doing, so as to create a smokescreen or false equivalence.  We suspect that it’s some of both.

Thus, one goal of the Democrats was based on the calculation that they need to create an image of legitimate grounds for impeachment, one that their media allies would enthusiastically feed to the public; one which could also provide cover for Establishment Republicans, several of whom they anticipate would flip and vote for impeachment and removal from office (which, unfortunately, may not be an unfounded assumption).

Secondly, a backup goal of the Democrats’ continuous-since-the-2016-election impeachapalooza – realizing that eventually their nefarious activities would be exposed – was an attempt to manufacture a mutual-image of wrongdoing. And through this, intending that (potential 2020) voters fed “mainstream” media false-equivalence would internalize it, and so neutralize reasons for (swing) voters to hold Democrat candidates accountable at the polls.

Thirdly, and perhaps pre-Ukraine most importantly to the Democrats, their need to keep lower level Deep State bureaucrats (and other potential witnesses) on the farm; by implied (if not express) threat of later Democrat retaliation should there be cooperation in bringing them to justice.

For this to work, there had to be a belief that a viable option was to “wait out” Trump’s time in office and that the Democrats and their Deep State allies would be back in the saddle.  That, and knowledge that in the meantime the Deep State / Democrat leaders were no doubt keeping tallies on whom to later reward, and whom to punish.

Indeed, many may have rationally assumed (especially pre-Mueller report) that by “Resisting” now, they would avoid retribution under a successor administration. For this to work, the minions around Democrat leadership and the “Resistance” bureaucracy had to be made to cling to one hope – that they can all outlast Trump, and so also Attorney General Barr.

But happens if President Trump might be reelected?  If the lower level Deep State minions come to believe that there could be “four more years,” their determination will wobble. Self-preservation comes to the fore – those who previously thought that they’d be protected under a 2021 and on Democrat (or Establishment Republican) administration, would be incentivized to consider flipping.

And should they become persuaded that President Trump will be reelected, they will be forced to confront their own vulnerability. Instead of Resistance,” visions of becoming cooperating witnesses for plea deals will begin dancing through the heads of Deep State players small and large.

That is why the Democrat / Deep State leadership has been so adamant about keeping an “impeachment” and “not re-electable” narrative alive – for before Ukraine it was seen as the only thing between them and jail.

Tellingly, recall that after the Mueller impeachment well was found to be a dry hole, the Inspector General indicated that previously uncooperative witnesses started coming forward. One can sense the panic in Democrat ranks – this public pronouncement was a de facto invitation to Deep State minions to come forward now, while you still can.

One suspects that this might have been a main driver behind the apparently slap-dash haste with which the Ukraine “whistleblower” concoction was rolled-out as the “this time we’ll get him” impeachment vehicle.  Which brings us to …

It couldn’t be clearer, and that’s not just undermining democratic institutions — that is treason. It’s treason pure and simple, and the penalty for treason under the U.S. code is death. That’s the only penalty. The penalty on the Constitution is removal from office, and that might look like a pretty good alternative to the president if he could work out a plea deal.

– Bill Weld, former Governor of Massachusetts, referring to President Trump while premising that the Democrats’ Ukraine allegations were true.

Bill Weld’s comments signal that the Democrats know what’s at stake – for them. Their attempt at manufacturing (yet another) impeachable offense against President Trump related to Ukraine is backfiring. Backfiring bigly!

The post-Mueller, post-obstruction, “whistleblower” impeachment grenade has bounced off of the wall of truth, and landed back into the Democrats’ lap. With perhaps – literally – fatal results for some Deep State players.

One can imagine the behind-closed-doors scream-fests being directed at Adam Schiff and those who schemed with him to manufacture the “whistleblower” impeachment.

It’s starting to resemble a scene in the movie The Hunt for Red October in which the Soviet attack sub captain had ordered the “safeties” removed from the torpedoes – only to have those torpedoes circle-back to destroy his own sub – his executive officer exclaiming to the captain just before they blow: “You arrogant ass! You’ve killed us!” Then BOOM!

For several of the Democrats and their Deep State comrades, the stakes have now escalated from nefariously seeking to retain power and privilege, through avoiding jail time, to now avoiding execution.

Considering their myriad and cumulative crimes to date – from the Clinton Foundation to Clinton email servers to FISA abuse to an attempted coup – the prospect of what they might be capable of in their newfound desperation is terrifying.  Our country is in real peril.

At the same time, the increasing likelihood that the full extent of their crimes will be exposed, and justice rendered, is a heady prospect indeed – the swamp may yet be drained!

We are living momentous history. 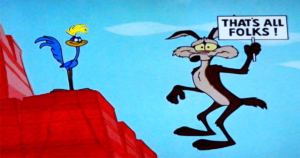 Hopefully, years hence, we’ll be able to look back and chuckle about how the “looney tunes” Democrats and Deep State actors actually thought that they could pull it off.

Mr. Wigand is the author of the book Communiqués From the Vast Right-Wing Conspiracy (available on Amazon in both print and Kindle versions).

I was just saying last Friday how President Trump is like the Roadrunner and Congress is like the Coyote. Mel Blanc, I.Freling, Chuck Jones and Robert McKimson are all laughing from beyond. Imagine the great cartoon they could make of the clusterfuck the Democrats have become. Hillary riding her broom and the 4 clueless ones as whatever mob dujour they could dream up. I would love to see how they would portray Joe Biden, Nancy Pelosi and Schmuck Schumer…

Two steps forward, one step backwards, on and on and on, eek! I like it because POTUS is not giving in in spite of all they try to pile on him, I like a fighter, and most because he is a nationalist doing it in the name of WE THE PEOPLE. Little by little it is all coming to light. That at one point one makes a mistake, ALL OF US do, we are not perfect, only GOD is perfect, and there are many men with POTUS guarding the Nation. Let’s see what new “IMPEACHMENT” is fabricated after the FISA… Read more »

Excellent post, Tom. Let’s hope Trump indeed is the wily Roadrunner and that, like the fate of the Coyote, all the machinations of Demonrats will blow up in their faces.