Ted Cruz: 'I have no desire to copulate with Trump'

In the brouhaha between Ted Cruz and Donald Trump over their respective wives and the National Enquirer‘s revelation that Cruz has had 5 mistresses — two of whom have been confirmed by the Washington Times — the media have dutifully reported and quoted Cruz’s denial.
From Cruz’s statement on Facebook (see also NBC News’ account of Cruz’s denial):

But what NBC and other mainstream media outlets curiously left out is this rather bizarre part of Cruz’s denial statement, which you can hear for yourself beginning at the 0:52 mark in the news video below:
[youtube=https://youtu.be/Bg2sC37QWfM?t=51s]

[Referring to Trump ally Roger Stone, whom Cruz blames for the National Enquirer story] “Mister Stone is a man who has 50 years of dirty tricks behind him. He’s a man for whom a term was coined for copulating with a rodent. Well, let me be clear: Donald Trump may be a rat but I have no desire to copulate with him.“

Now, why would Cruz even think about having sex with Trump, rat or no rat?
Note also that, while denouncing the “attacks” as “garbage,” nowhere in Cruz’s statement does he specifically deny knowing or having had extramarital sex with the five women. Remember that Ted Cruz is a lawyer and, like Bill Clinton, trained and well-versed in legalese parsing.
Instead, Cruz makes a point of denying that he wants to have sex with Trump: “I have no desire to copulate with him.” But who’s accusing Cruz of that? In other words, instead of saying “I did not have sex with those women,” Cruz said “I did not have sex with Donald Trump”!
Cruz’s bizarre denial reminds me of another bizarre comment about Trump by Marco Rubio.
In late February 2016, in response to Trump calling him “little Rubio” (Trump is 6′ 2″ and 69 years old; Rubio is 44 years old and claims to be 5′ 10″, but wears Cuban boots with 2″ heels), Rubio conceded that Trump is taller, but pointed out that Trump has small hands, snidely implying that Trump also has a small penis. To the crowd at a campaign rally in a university in Salem, Virginia, Rubio said:

“And you know what they say about guys with small hands.”

That, in turn, led to the dreadful spectacle at the GOP presidential debate on March 3, 2016, of Trump declaring he doesn’t have small hands or a small penis.
[youtube=https://www.youtube.com/watch?v=Oiu501YlkgA]
Meanwhile, the National Enquirer has updated their story on Cruz with 3 more women, bringing the total of Cruz’s alleged mistresses to eight. According to the video below, the brother of one of the liaisons — a married woman — has confirmed the affair. Cruz is said to copulate with these women in “multiple places” — in closets and bathrooms of campaign buses.
[youtube=https://www.youtube.com/watch?v=1dB3VXwD6X0&feature=youtu.be]
Internet users on Twitter, Reddit and 4chan quickly went to work to determine the identity of Cruz’s alleged mistresses, using the hashtag #CruzSexScandal. Three of the women are said to be Katrina Pierson (who previously had worked for Cruz and is now Trump’s spokesperson!), Sarah Isgur Flores (who had worked as Carly Fiorina’s deputy campaign manager), and Amanda Carpenter (former Ted Cruz communications director).
Both Pierson and Carpenter have issued denials. As for Flores, recall that last July, for some strange reason a Ted Cruz super PAC gave $½ million to Carly Fiorina’s presidential campaign — money that Conservative Outfitters claims was “hush money”. (See my post “Something stinks: Ted Cruz’s Super PAC donated $½ million to Carly Fiorina’s campaign”.) Karl Denninger of Market Ticker says that “if that was ‘hush money’ it may well have been a criminal offense and the FEC is already looking into it…..”
H/t my bud Mark S. McGrew and Barry Soetoro Esq.
~Eowyn

What does it all mean?!

Idk where the ‘I’ at the end of vistabee came from!
I am vistabee!
josephbc69, thanks-I was not familiar with that MP song. 🙂
This election stuff is getting kookier and kookier, no?!

What a cluster this election has become. I didn’t think it could get worse and now it has. Just unbelievable what has become of our politicians. All of ’em!

Reblogged this on Exposing Modern Mugwumps and commented:
Oh boy, Cruz is both like Clinton, and Obama, a one term senator and sealed records. This is no Trump smear, this is Teddy Cruz’s slimy past. Ugh.

Ucky, you know I can’t see him as a babe magnet, but some women like power and money, yuk…can you even imagine kissing that ugly mug.

How does a human brain create a link from “sex with beautiful women” to “I don’t want to have sex with Trump”??? How does the brain function to arrive at that conclusion? It’s like driving from Los Angeles to New York and you have a map. But, on the last day of your trip, you are parked in Nome, Alaska and you still think you arrived in New York. This is very dangerous sequential thinking. The synapse of the brain are not firing in order. Proper connections are not being made. The physical properties of the brain are not performing… Read more »

“Mister Stone is a man who has 50 years of dirty tricks behind him. He’s a man for whom a term was coined for copulating with a rodent. Well, let me be clear: Donald Trump may be a rat but I have no desire to copulate with him.“
It makes sense when IN context.

That ‘i’ was most likely there as I lost most of the sight in my good 20/40 R eye more than a year ago, so now type w/2 fingers & my eyes four inches from the keyboard. My L eye’s now dominant, but at 20/400 it’s unfortunately legally blind!
As for the kookier stuff, let me expand on just how VERY much more bizarro it will become in my next comment, as my eye is declining.

Now this is getting interesting. In a previous comment I said that many men have had mistresses. All right, many do, but that doesn’t make it right: Adultery and fornication are SINS! Be that as it may, it’s rather amusing to see another politician wriggle, writhe and squirm! Yes, I am enjoying the schadenfreude! But there is something extremely serious going on, or could be going on. Did Ted Cruz’s PAC pay hush money to Carly Fiorina’s camp, or to Carly Fiorina herself? That is a felony. Now we must ask the question: Is Ted Cruz being blackmailed? And, if… Read more »

Right. Candidates aren’t selected by the rank and file, it goes without saying, and have already sold out and been selected on the blackmail angle, where they’re blowing a lot more than smoke behind closed doors. We’re also sold out by the so-called conservative punditry such as at the real-sounding American Conservative, whose contributors are screaming fruitcakes who’ve never worked a real job in their limp-wristed lives.

Ted Cruz: ‘I have no desire to copulate with Trump’ — Fellowship of the Minds | kommonsentsjane 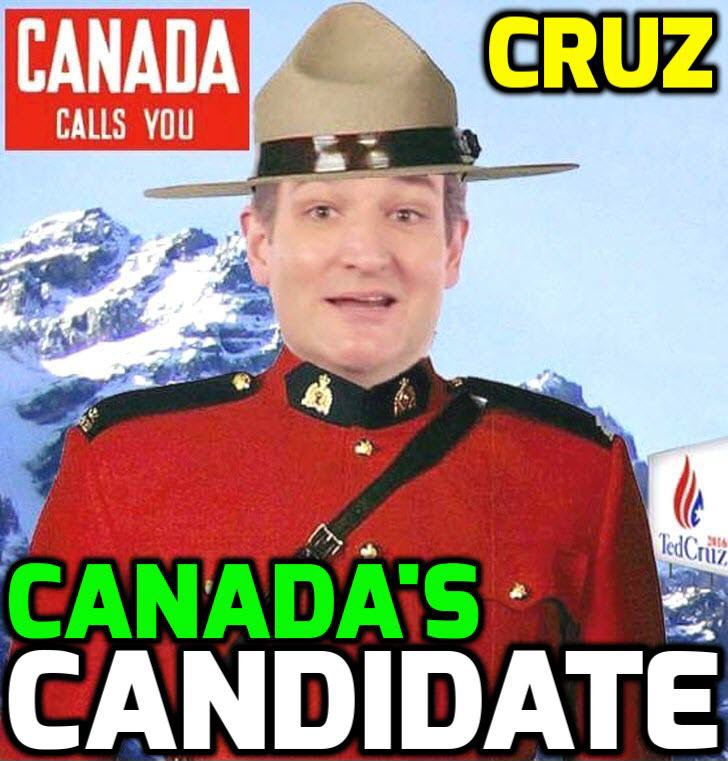 Its not just that he was born in canada. He was born to parents with differing citizenship. That is unless it is true that both his parents became naturalized canadian citizens. Regardless, he is not a “Natural Born” U.S. citizen. He might possibly be a natural born canadian citizen if the claim about his parents is true. And that also does mean obama is a lying fraud also.

No, no, no, NOT back here in Kanada!! We’ve enough problems w/corruption & politicos and do NOT need another useful idiot!!

And now poor Canada has a mighty fine socialist PM, with a nefarious agenda it seems. Does it ever end?

Unfortunately, Glenn47, it does not. I arrived in Canada before P E Trudeau’s election, so I lived through those very different times. Accustomed as I was to the rough & tumble of US electoral politics, Canada’s decorum was a surprise to me, and –frankly– I found it all rather amusing. In the only US sElection I ever voted for President, I preferred Goldwater, but Curtis LeMay was WAY too atavistic for me, so I choose Johnson, the ‘lesser’ of two evils, which turned out to be by far the greater one. Never again! Flash forward to our present era and… Read more »

Dr Eowyn is 100% on the money . . . Cruz has not denied that he has had sex with other women, all the while being married to his wife. He has danced all over the floor, casting aspersions on everything but never coming out and telling us point blank that he is not guilty of what The National Inquirer has put forth that he is guilty of. Why in Heaven’s name would he be squandering half a million on another candidate’s campaign unless it was to hush up something he did not want leaked to the public.This brings into… Read more »

As always, you are spot on and true. Kudos auntie! Amen & ditto to all you wrote.

Okay,let’s throw out EVERY Candidate who isn’t suitable or eligible: (I know I’m missing a lot of Candidates;please forgive me- I’m running on about 3 hours of sleep in the last two days) Cruz-Citizenship Rubio-Citizenship Trump-rude comments about Women and other Candidates/former Democrat (Reagan was a Democrat before his Presidency,too) Clinton-not yet convicted of Crimes against America/Female version of Obama (on steroids) Sanders-Socialist/Communist Fiorina-Hewlett Packard fiasco Christie-the bridge thing Kasich-anti-Second Amendment voting record Carson-Pacifist tendency/less than half hearted support of Second Amendment Huckabee- Who else was there? The point is that of ALL the possible Candidates,NONE of these Candidates are… Read more »

Dear truck:
I think you’re overreacting. If I go by your rant, then no one should point out anything critical about any of the candidates. Is that really what you want?

Like truck said- running on 3 hrs sleep…!
I was surprised months ago when that quiz told me I was ‘most aligned’ with Trump (remember, folks?) Today, it makes perfect sense. :-))

Well, Cruz made the statement he did not want to copulate with Trump???? It would seem, he doesn’t want to with his wife either.
And with the questions about his mothers BC info several sealed records, you have to ask questions?
And is he like Clinton, shooting blanks and feel he is safe. Are the kids his?
Is he trying to hide his extra activities by having children?

It would seem, he doesn’t want to with his wife either.
Brilliant!

It might be noted that Bill Still, the maker of the video concerning the three additional women, has made a subsequent video saying he was duped about the info and apologized for spreading the hoax.

I might add that Teddie’s refusal to “copulate” with the Donald has lost him the LGBT vote.

Oh this is what Cruz means by #nevertrump. He also subscribes to anybody but Trump. That is scary.

The Traitor will push for Clinton!