Teamsters private pension near bankruptcy; benefits of 407,000 retirees may be 'virtually nothing'

America’s public (i.e, government) and private pensions are in trouble. The difference is that the government pensions don’t go bankrupt because Uncle Sam hits taxpayers to continue funding government retirees.
Now, one of America’s biggest private pensions — the Teamsters’ Central States Pension Fund that covers more than 1,500 companies across a range of industries — is nearly bankrupt.
The fund currently pays out $3 for every $1 it takes in.
If there’s no bail out by the federal government, the Fund will run out of money in 10 years, by 2026, at which time the pensions of some 407,000 people — most of whom are truck drivers — will be reduced to virtually nothing.
The above is stated in a letter sent to Central States’ workers and retirees on May 20, 2016, by the fund’s director Thomas Nyhan.
Katie Lobosco reports for CNN Money that was precipitated the Fund’s crisis was the Treasury Department’s rejection on May 6, 2016, of a last-ditch solution proposed by the Fund which would partially reduce the pensions of 115,000 retirees and the future benefits for 155,000 current workers. Although the proposed cuts were steep, as much as 60% for some, it still wasn’t enough. The Treasury Department rejected the proposed reduction because doing so would not actually head off insolvency.
The fund could submit a new plan, but decided this week that there’s no other way to successfully save the fund and comply with the law. The cuts needed would be too severe.
One of the reasons why the Central States Pension Fund is in trouble is because a lot of the fund’s companies went bankrupt after the trucking industry was deregulated in the 1980s.
Normally, when a multi-employer fund like Central States runs out of money, a government insurance fund called the Pension Benefit Guaranty Corporation (PBGC) kicks in so that retirees still receive some kind of benefit.
But there are problems — serious problems — with a rescue by PBGC:

Nyhan said the problem can be fixed only with government funding, either to the Central States Fund directly or through the PBGC. Nyhan therefore is asking Congress to come up with a solution, a request that’s echoed by Treasury Secretary Jack Lew — he of the squiggly childlike signature.

Right now there’s only one piece of legislation on the table that could help — the Keep Our Pension Promises Act (KOPPA) that was introduced by Senator Bernie Sanders last year, but never moved out of committee. KOPPA would provide more funding for the PBGC, specifically for struggling multi-employer plans like the Central States Pension Fund. According to Sanders’ website, the money would come from closing a loophole in the estate tax and a tax break on sales of expensive art and other collectibles.
Elliot Blair Smith of MarketWatch writes:

The debacle unfolding at the $16.1 billion Central States fund in Rosemont, Illinois, is a cautionary tale for all Americans dependent on their retirement savings. Unable to reverse a decades-long outflow of benefits payments over pension contributions, the professional money managers placed big bets on stocks and non-traditional investments between 2005 and 2008, with catastrophic consequences [. . . of] 42% drop in assets—and a loss of about $11.1 billion in seed capital—in just 15 months during 2008 and early 2009.

To find out if you’re saving enough for retirement (based on your age, annual income, and savings per month), go here.
~Eowyn

That’s what happens when goonion “leaders” pocket all the goonion money.

And then they pander to Democrats for more… 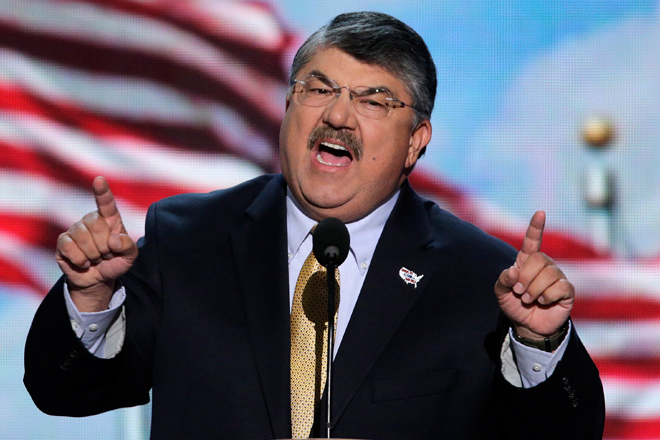 Dave . . . you are so right. I was a member of Teamsters 223, Pacific Northwest. Because we were mostly women where I worked, they never allowed us to hold positions . . . NO just union officials held the big bucks jobs as union officials. They would switch jobs around, so n so would be the union rep for a while, then he would trade with someone else to become the Union Local President, etc, etc, etc. As awful as it sounds, how can the American people be asked to pony up money to shore up a pension… Read more »

P.S. Not all Teamsters follow the party line and vote the way they want the union members to vote. Thank Goodness!

I wonder how much of the blame for this mess must go to Jimmy Hoffa, Sr. and all the phony “loans” made under his rule from the Teamsters’ Pension Funds to his Mafia associates.

while the teamster bosses are RICH, the workers will lose it all and make o’bama real happy because they’ll be forced to be under his “protection” (no, not really. o’bama wants the USA to be like a third world country and UNprotected)

All executives who didn’t do anything to stop this before it got to this point should be fired and charged criminally. All other execs should have their pay reduced and any pensions due them reduced by the same formula as the workers—that is if there’s anything left.

So… the thugs who beat up (or worse) anyone who refuses to be “unionized” are now about to run out of retirement money? Should I laugh? Should I cry?

Sounds like a case for some more fine management skills. A few years ago, unions in Michigan were trying to force parents that gave 24/7 home care to their children to join the union as home care givers even though the union did nothing for them, they just wanted the dues. That is how desperate they are.
Until those that pay in realize how much of their dues are going for nothing but the bigwigs lifestyle, no changes will be made.

Teamsters private pension near bankruptcy; benefits of 407,000 retirees may be ‘virtually nothing’ - Grassyknoll