A good DRT* ending.
From WTVY.com: A Blakely (Georgia) woman shot a convicted sex offender to death over the weekend after he allegedly broke into her home.
During a 9-1-1 call placed late Saturday the victim reported she was assaulted after discovering 53-year old Michael Lindsey hiding in a closet of her home. The woman’s 12-year old daughter was also present.
“Deputies arrived at the scene and insured the safety of the victims who had locked themselves inside a room because they weren’t sure if the intruder was still inside the home,” Early County Investigator Captain Will Caudill said.
Officers also discovered 53-year old Michael Lindsey outside the home. He was taken to a Blakely hospital and pronounced dead. He’s believed to have stumbled from inside before collapsing. Prior to the shooting she fought off her attacker with a spoon, a police report states.
Caudill said Lindsey molested a child in 1999 and is listed on the Georgia Sex Offender Registry.
Caudill said his car was found parked behind a motel located a short distance from the home. He isn’t sure if he had broken into the home before the victim arrived home or afterwards.
Records indicate the victim’s home had recently been burglarized twice. Caudill isn’t sure if those incidents are related to the home invasion.
No charges were filed against the woman who fatally shot Lindsey, and Caudill predicts if no new evidence is discovered none will be. “We plan to present our findings to the district attorney’s office, a standard practice on these type cases, and they can decide what action, if any, should be taken.”
h/t Breitbart
DCG
*Dead Right There

CONGRATULATIONS FOR A JOB WELL DONE!

Give her a medal! She did the job our crappy gov’t won’t do.

The Police — always just minutes away (at a doughnut shop or writing a money-grabbing minor traffic ticket) when every second is crucial!
Kudos to this woman for exercising her 2nd Amendment right and ridding society of another virus.
(If I weren’t a Christian, I would be Paul Kersey and William Foster all rolled into one.)
~ D-FensDogG
Ferret-Faced Fascist Friends

Well, you can’t expect much of a response from them if there isn’t a fine or a quota involved. If you mention “armed and dangerous” you can add another couple of hours left until they shoot you and everyone else in your house.
In all seriousness, take care of it yourself if you have to. I would not place my household in danger by calling them. They won’t get there in time to do any good and, when they do they’ll fire at anything that moves.

>>… “and, when they do they’ll fire at anything that moves.”
Absolutely! Anyone whose family dog is in sight when the police roll up can just say goodbye to Rover.
~ Stephen

Unfortunately, that’s all too true.

They only show up around here when the criminals call them.

If the story is as they say no charges should be filed. The moment he broke into the house he lost his right to live. I do not condone the taking of a life unless there is no other options on the table. The Commandment thou shall not kill I do not agree with it is different in different versions of the Bible it to me “thou shall not murder”. Killing someone who is about to harm innocents is not murder. Sorry I am sure a lot will disagree with me on this but its what I believe.

Brian, you are 100% correct. The accurate reading of the Commandment should be “Thou shalt not murder”, NOT “Thou shalt not kill”.
Logic alone dictates this, seeing as how AFTER giving the Ten Commandments to Moses, God instituted laws commanding the Israelites to put to death people who committed certain offenses. This obviously means, then, that in the eyes of God, not all killing is considered murder and in opposition to the 6th Commandment.
~ D-FensDogG
Would You Like To See… ‘It’s A Wonderful Life’ Come To Life?

I used to get so much grief from that statement seemed to me that King James wanted to control all the people at the time with religion and that made it so he could condemn anyone to death for the act. That is far fetched but when you read the Gospel you realize this but the left and the atheist love to grill you on it.

Brian, in my years online, it’s seemed to me that the real biggie for the Atheistic Leftists is to criticize The Bible and Christ Yeshua for slavery. “They don’t condemn it!” cry the snowflakes. For awhile, I would explain it to them. But eventually I got so tired of having to educate the willfully ignorant that now I’ll just tell them: “Go read The Bible for yourself and ask The Holy Spirit to explain it to you.” I have only so much patience for the Libtards, and my patience has done all run out! They have no idea how lucky… Read more »

That is the correct translation i.e. “murder”. There’s a huge reason not touched on by churches as to why the Israelites were told to kill the surrounding kings / peoples – it has to do with progeny of nephilim and gibborim (giants). This is elaborated on in books like 1 Enoch, Jasher, but just think of this: in scripture king Og of Bashan was about 17ft tall and his bed was about 7 ft wide, Goliath had 5 brothers – all giants too – as well as most of the Philistines. Brothers like Dr. Tom Horn, L A Marzulli, Gary… Read more »

Brian . . . . You are so right! Another way of viewing this is “Thou shall not shed innocent blood.” The moment this perpetrator entered this woman’s home . . . his blood was no longer innocent, and his death is squarely on his own head, not on hers.

You got it Auntie Lulu!
His blood wasn’t innocent for quite a long time. He was most likely targeting them because of the woman’s child.
Good riddance to him.

Read the Bible again and see how many times God sent in the Israelites to clean pagan lands. Remember the flood and judgement to come? Then read where Christ asked His apostles if they had their swords and if not to go out and buy one.

I agree with you. Christians shouldn’t go out and kill, but self defense is different. I would do anything to defend my kids.

Win-Win for all concerned. So sad though that the intruder did not know his Lord and Savior before he passed on. So glad the woman and child are safe. Praise the Lord for that.

Years ago I read a short story written by an Executioner at a prominent Prison. In it,he stated,”Many of those I executed waved off the Priest initially,but they ALL get religion before they die.” Makes me wonder,is that too late?

They should give her a medal and as much air time as they did the Michael Brown circus. Good for her.

Yep, the police department owes her a bullet.

Situations like that are exactly why our Sheriff’s Officers WANT everyone to be armed. I believe,with exception of Alaska,Elko County has about the most miles to cover with the least number of officers,so they all tell the people,quite freely,your protection is up to YOU;unless one of us happens to be nearby,we can’t protect you,but you can know that if we CAN get there in time,any one of us will put our life on the line to protect you. As a result of the limited number of Officers per square mile,the courts seem willing to generally lean towards “Self Defense” as… Read more »

My uncle used to be sheriff of Lander County. There are a few miles of nothing out there too.

When I was in Nevada I never met anyone who wasn’t armed. Why on Earth anyone would rather rely on someone else is beyond me. I suppose there are situations where you want to “call in the cavalry”, but I’d give that a lot of thought.
As they say, it is easier to get forgiveness than permission.

So where’s the Kickstarter or GoFundMe site to help this lady just in case the family of this animal decides to sue her. Also, she could use the money for more guns and ammo. 🙂

it was bound to happen

That’s the only reason why our neighbors (they’re inbred hicks from hell) don’t break into our house.

Yeah! One less creep. How about open season and no bag limit.

If you offered a free backhoe service you’d have the whole thing covered.

I am glad she had the bravery and tools to protect herself. It could have ended much differently.

Absolutely. It’s the difference between calling a pest control company or going to the hardware store and taking care of it yourself.

Prison is false justice. Jail time doesn’t fit every crime. Justice needs reforming and it begins with removing the blind fold from the eyes of lady of justice. Once she see what was happening in our nation she would sharpen that rusty sword, put down that unbalanced scale, pick up a razor sharp dragon katana, throw on some tractor jeans, and put some combat boots on those dry crusty feet. And instead of standing on the Bible learn it and apply it. Just saying 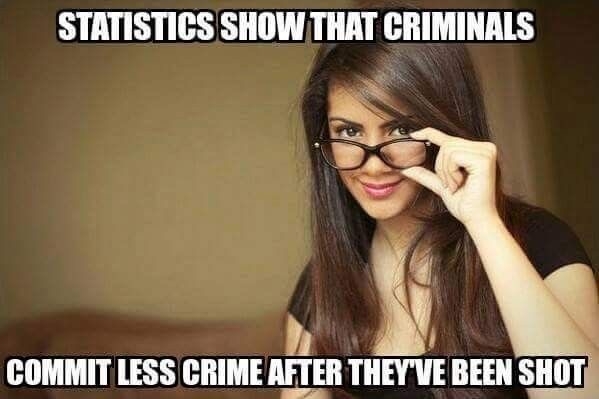 He probably thought she was easy pickins.
At least they’re safe and her daughter can be proud of knowing her mom knows how to handle crisis situations.