Is Sheriff Joe Getting Too Close To The Truth About Obama? 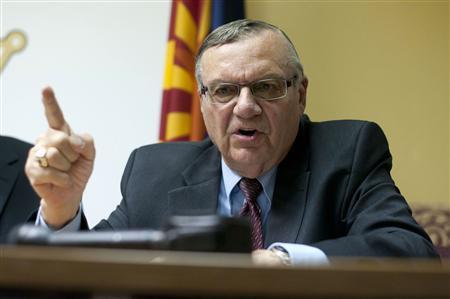 WASHINGTON (Reuters) – The Obama administration on Tuesday said it was preparing to sue Arizona county sheriff Joe Arpaio and his department for violating civil rights laws by improperly targeting Latinos in a bid to crack down on illegal immigrants.
The sheriff’s high-profile crackdown on illegal immigrants has helped thrust the issue onto the national political stage with some states passing tough new laws aimed at pushing out those in the country illegally.
The administration’s Justice Department and the Maricopa County Sheriff’s Office have been in settlement talks for months over allegations that officers regularly made unlawful stops and arrests of Latinos, used excessive force against them and failed to adequately protect the Hispanic community.
Those negotiations have broken down because of a fight over the Justice Department’s demand that an independent monitor be appointed by a federal court to oversee compliance with the settlement, which has now reached 128 pages in draft form, according to the Obama administration.
“We believe that you are wasting time and not negotiating in good faith,” Roy Austin, deputy assistant attorney general in the Justice Department’s civil rights division, said in a letter to the lawyer for Maricopa County Sheriff’s Office (MCSO).
Austin said in the letter that Arpaio’s team demanded that a meeting slated for Wednesday include for the first time negotiations over the monitor and previously had demanded that the Justice Department provide more details about its findings.
“MCSO’s refusal to engage in good faith negotiations requires us to prepare for civil (court) action,” Austin said. He added that the Justice Department has recently discovered more information about the “failure to reasonably investigate sex crimes” by Arpaio’s office.
The Justice Department in a December report outlined numerous alleged civil rights violations, including that Latino drivers were four to nine times more likely to be stopped than non-Latinos by Arpaio’s force.
The sheriff has steadfastly denied any wrongdoing and lashed out at the Obama administration for targeting his department and failing to deal with the problem of illegal immigration with some 11.5 million believed to be in the United States.
In a strongly worded statement on Tuesday, Arpaio said the appointment of a monitor would force him to abdicate responsibility for his police force, including decisions about policies, operations, jail programs and enforcement.
“To the Obama administration, who is attempting to strong arm me into submission only for its political gain, I say: This will not happen, not on my watch!” Arpaio said in the statement.
Arpaio’s force has been under investigation by federal authorities since 2008 during the Bush administration. Obama’s Justice Department spent months fighting for access to documents and to some of his deputies. Arpaio was interviewed twice during the probe.
(Additional reporting by David Schwartz in Phoenix; Editing by Anthony Boadle)
Can you say ‘Wag the Dog’?
Tom in NC