If the NFL goes full SJW for BLM, kiss the league goodbye.
From MyNorthwest.com: Seahawks defensive end Michael Bennett is one of four NFL players that have sent a letter to the NFL requesting support from the league, general managers and owners for community outreach and social justice efforts on the part of its players. The players have also requested that the NFL recognize November as activism awareness month.
“We always have different months (when) we recognize different people or different issues in America, and we felt like that was a big issue,” Bennett told reporters Wednesday when explaining the idea. “We wanted to find a way to recognize it and be able to have that conversation (where) people can find information about things they want to get involved with.”
The 10-page memo, obtained by Yahoo! Sports’ Charles Robinson was reportedly sent to NFL Commissioner Roger Goodell in August by Bennett, Philadelphia Eagles safety Malcolm Jenkins and wide receiver Torrey Smith, and former NFL wide receiver Anquan Bolden. The players requested the following of the league:
“To be clear, we are asking for your support. We appreciate your acknowledgment on the call regarding the clear distinction between support and permission. For us, support means: bear all or part of the weight of; hold up; give assistance to, especially financially; enable to function or act. We need support, collaboration and partnerships to achieve our goal of strengthening the community. There are a variety of ways for you to get involved. Similar to the model we have in place for players to get involved, there are three tiers of engagement based on your comfort level.”
Bennett has been an advocate for social justice issues and routinely speaks out about police brutality, racism, and inequality. This season, Bennett has chosen to sit for the national anthem, telling reporters the gesture is an effort to use his platform to oppose segregation and oppression. Several teammates, including center Justin Britt, defensive ends Cliff Avril and Frank Clark, running back Thomas Rawls, and cornerback Jeremy Lane, have shown public support for Bennett during his silent protest.
“I don’t know what the chances are (that the league accepts our proposal),” Bennett said. “Hopefully, the chances are 100 percent, but we’ll see. It takes a lot for a business or organization to get behind certain issues, and we’re hoping to keep pushing it to see if we can ever get to that place where we can be comfortable with talking about the issues that are going on around the country.”
DCG
Please follow and like us:

Keep it up. Bye bye to multimillion $ contracts. You are losing the people who pay your salaries.

I think they should lose their ‘tax exempt’ status as a (HA HA HA) so called non profit. This is BS! It’s a mind numbing sport, not some soap box for NWO sleight of hand!

President Trump is picking a fight with the NFL.
Last night in a rally in Alabama, Pres. Trump calls on the NFL to fire “son of a bitch” players who disrespect the flag. NFL players are outraged, incl. DeMaurice Smith, Executive Director of the NFL Players Association, who tweeted: “We will never back down. We no longer can afford to stick to sports.”
https://americanmilitarynews.com/2017/09/trump-calls-colin-kaepernick-son-of-a-bitch-for-protesting-during-national-anthem-and-nfl-players-are-livid/
Americans should stop watching NFL games.

What is he talking about. Without their sports why would anybody pay any attention to them? They may be this idiotic but I’ll bet their investors aren’t.

Boycott the investors and advertisers. This problem will suddenly go away.

Yep-grossly overpaid sports figures are NOT being paid to promote political agendas. They are paid extremely well,so if they want to do that stuff on their OWN time,with their OWN money,that’s fine. Asking their management to front the bill for it is just plain STUPID. As Noreen said,that’s an easy way to lose their huge incomes and sink the No Faith Losers.

TJ, you are correct. Why should anyone be subjected to their little tantrum fits? They already have all the rights anyone else has. We all have things we are passionate about, but we don’t hold those wanting to just view sports hostage. People want an escape and watching these overpaid punks have meltdowns and show such utter disrespect to our flag as well as our ancestors that fought for her is not what they have in mind when they turn on the TV.

So are they asking to use the pre-game and National Anthemn for players who want to protest or support ANY ISSUE OR CAUSE?

Somebody needs to tell this guy, who obviously doesn’t understand where the NFLs revenue originates, that we pay big bucks to get our corporate names placed all over their stadiums and in TV ads. Already this behavior is causing concern over whether brands should be associated with a trend our customers and clients despise. Ticket sales aren’t going to put up the big salaries. Kill the goose and you lose the golden eggs.

Ok, first of all- November is Movember month, a form of “activism” for prostate cancer. You already have February black history month for activism for blacks. Step off.

If a player or two uses the pre game to support traditional marriage or for 2nd Amendment rights ( which the NFL has opposed), then they’ll probably shut down player demonstrations.

Reblogged this on kommonsentsjane and commented:
Reblogged on kommonsentsjane/blogkommonsents.
Since when were these fellows oppressed and segregated – making millions in their present position and they are complaining? From what I have read the blacks now want to go back to having their own society instead of mixing with white folks. In fact BLM recently had a gig and the invitation read “no white folks.”
These people are just stirring the pot. Tell them to put their money in the government pot to help all folks and pay off the debt that Obama stuck in his pocket.
kommonsentsjane

Wow, not THERE’S a novel idea. Sort of “Jamal Crowe”. I love this. I wouldn’t want to taint the racial purity of these events with white money. We must make certain that it is kept out of their utopian effort.

They should spend some time in Africa helping their “relatives” and then come back here and see how GOOD they have it! Then maybe they’ll stop sniveling and whining about NOTHING.
BLM are just CIA funded fake organizations, designed to divide people and do no good whatsoever.

Fire them all.
There are thousands of players who did not make the cut and would be willing to play for a tenth of the pay.

Why shouldn’t the NFL support the Nazi Party or KKK?

Mark Twain — ‘Never argue with a fool, onlookers may not be able to tell the difference.’

And when you argue with a fool the best outcome you can hope for is a tie.

What pisses me off about “protests” like this is that the players have had an entire off-season to address their concerns–scratch that–put their money where their mouth is; and they have a lot of money. Roger Goodell’s too chickens*** and lacks testicular fortitude to do what’s right. Cowboys owner Jerry Jones has made it pretty clear to his team that he ain’t gonna put up with that nonsense, especially when 5 Dallas law enforcement officers were assassinated in 2016. Sports doesn’t play much of a role in my life anymore – it used to, but not anymore; I haven’t heard… Read more »

I imagine there are some professional sports figures that do contribute to the community in some way during their ‘off’ season. I also bet that not one of them takes a knee in protest when everybody else stands in unity to the greatest country the planet has ever known. If they can’t show pride then maybe they shouldn’t show up at all.

Oh, I know there are many athletes who contribute in other ways to their communities – I’m just talking about this issue and how none of them have the time to address it then. 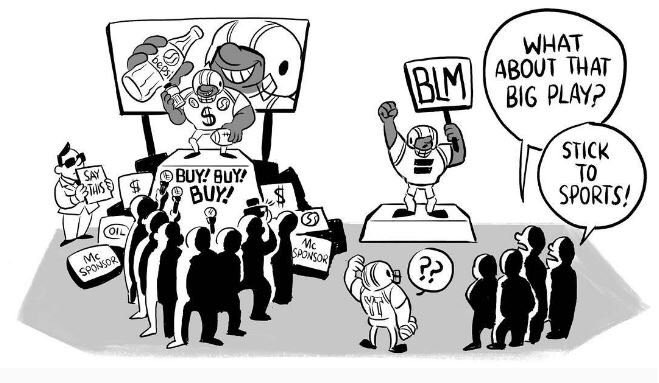 So now the nfl thinks it is a political party? So who will be their 2020 candidate for president…may be kaepernick? A literal “panem et circenses”, with perhaps…pumpernickel.

I guess for today’s game in London, numerous Jaguars & Ravens players took a knee/locked arms together.
But they had no problem standing when God Save The Queen was played, with a terrorist-supporting London mayor in attendance on the field.
If the players really feel that strongly about the National Anthem, why don’t they just rush the field, and burn the flags when it’s played? They obviously don’t care about bad publicity…

And the Steelers stayed in the locker room to avoid the controversy? That’s just as bad, if not worse, than sitting down on the sidelines.
Coach Tomlin & the players don’t realize they not only DIDN’T avoid the controversy, they really made themselves look chickens*** and disrespected all those who paid the ultimate price for the flag.
I remember there was a single, solitary college player (from Millikin University if I remember right) that stood alone for the Anthem while the rest of his cowardly, gutless teammates stayed inside the locker room.

Anyone else remember when Tim Tebow caught heck from the media for taking a knee and praying? Now taking a knee is protected by free speech???
Something is twisted here.

The fix is easy. Fire all of them. The pressure is easy to apply. Write their sponsors and tell them you will no longer watch or buy their products. That should do it.

Proverb; “Don’t bite the hand that feeds you.”
Meaning: If someone’s paying you or helping you out, you have to be careful not to make them angry or say bad things about them.?

Said another way; “stupid is as stupid does”.

The NFL is dead.
Roger Goodell killed it.
Pro football is just the latest American institution/tradition that the commie-lib destroyers of America have managed to wreck.
REAL Americans need to wake up to the fact that commie-libs are not your friend, before these pukes manage to lay waste to every last remaining vestige of our nation.

Any element of our society is fair game for them. If people recognized that, and failed to cooperate, they’d fail. Apparently they are charging right along.

What if some players held up signs that read “Abortion is Murder”? The left-wing outcry would be so great, that all future protests would be shut down right now.
The owners showing solidarity with their players is for obvious reasons: those football players make them lots of money. I hope the NFL goes belly up. 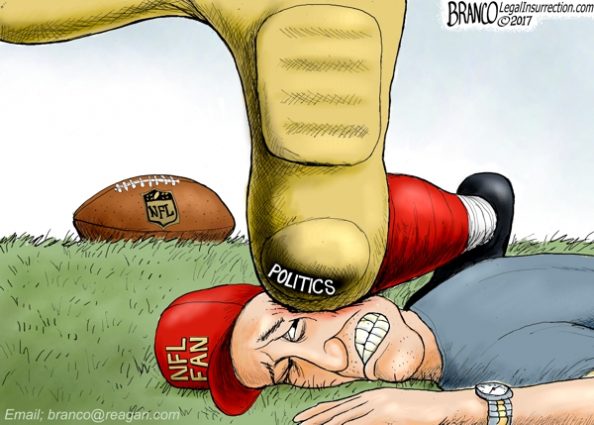 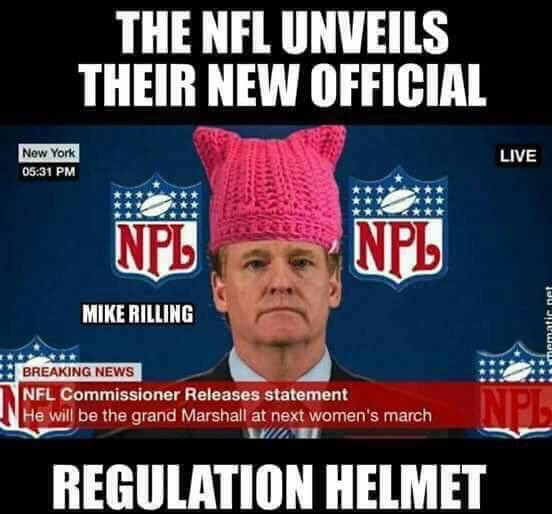 tim tebow took a knee for God and the nfl let him go…these losers take a knee against trump and our country, and they are glorified by the media…there’s so much CTE in players brains, they don’t understand and can’t even agree as to why the are “protesting”, except to say the catchall “injustice” like a bunch of overpaid parrots with crackers for brains.

The NFL player who wants social justice has a warrant out for his arrest for a felony charge: “Former Seattle Seahawk Michael Bennett has been indicted by a Harris County (Texas) grand jury for the felony charge of injury of the elderly for injuring a 66-year-old paraplegic who was working at NRG Stadium to control access to the field at Super Bowl LI, according to a press release from the county district attorney’s office. Further, according to the statement, “immediately following the game, Bennett shoved his way on to the field where players were gathering to celebrate. NRG Security personnel,… Read more »