The joke's on us!

Just what our servicemen need while dodging bullets and buried mines in the battlefield:

PC training on how to treat, live with, and shower alongside gays. 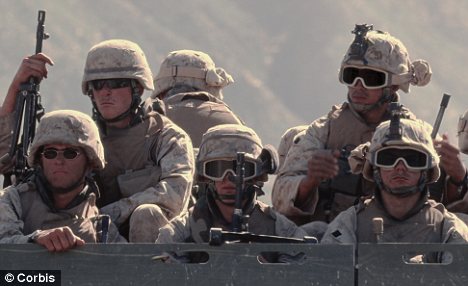 The Pentagon’s training programme follows on from the repeal of the ‘don’t ask, don’t tell’ ban which required gay troops to hide their sexuality.
President Obama signed a bill last year to end the ban but it will stay in place until the secretary of defense decides the policy will not interfere with combat readiness. Robert M Gates has said gays will be able to declare their sexual preference openly within the army before the end of 2011.

Obama signed repeal of DADT last year. What happened to Pelosi's face? Looks like her "picture of Dorian Gray" is finally catching up with her face....

Army Command Sergeant Major, Marvin Hill, said no unit would be exempt from taking the programme that will teach gay rights.”‘I have heard about the training that will be forthcoming to the battlefield,” he told Pentagon reporters via a teleconference from Kabul. “We will take our directions from the Department of Defense, from the secretary of defense, the chairman, as well as the service chiefs of each service. Our plan is to take their direction, and we’re going to execute that training right here on the battlefield. Our goal is to not allow a unit to return to home station and have the unit responsible for that. While we own those soldiers, sailors, airmen and Marines, we’re going to execute that training on the ground. We hope that it will have little impact on their combat and security operations here.”
What the actual programme involves is not yet available to the media, but a spokesman for the U.S. Army, told MailOnline that there would be “structured lesson plans”. The training will be broken down into three sections. The first section is for specialists like chaplains, lawyers and investigators. The second is for commanders in the field. The third is for the rest of the force – 2.2million active and reserve troops. “We expect the entire army of over a million people to be trained by the end of the summer”, the spokesman added.
Before the programme was announced Sergeant Hill, who has been an ardent advocate of the repeal, said on Washington Watch in December: “If there are people who cannot deal with the change, then they’re going to have to do what’s best for their troops and best for the organisation and best for the military service and exit the military service, so that we can move forward – if that’s the way that we have to go.”
Some have not been so keen however. Elaine Donnelly, who heads the Center for Military Readiness, called the move to train combat soldiers engaging in daily battle “‘ridiculous”.  “It’s absurd because the military has more important things to think about in that dangerous part of the world,” she told The Washington Times. “‘For the administration to say this is more important than even with the troops we’re trying to train in that part of the world, I think it shows flawed priorities at best.”
Please follow and like us:

I’m so glad to know we can’t afford to supply them all with proper equipment but we can pay consultants to host cultural workshops.
Priorities.

THE STEALTH JIHADIST URSURPER IN THE WHITEHOUSE IS A “DON’T ASK,DON’T TELL!!! GOD SPEED FOR JUSTICE.

How wonderful to hear about this special treatment. So the majority is forced to yield to the minority? I thought the military was about conformity. Why don’t they just have the male and female soldiers shower together now?

This pisses me off…our soldiers in the sand box have more important things to worry about. And when they are on the front line, do you believe they think about a fellow soldier’s sexual preference or protecting lives? Just maddening…

Left/left libtards idea of the Army… as demonstrated by Colonel “Bat” Guano in Dr. Strangelove:
https://www.youtube.com/watch?v=ud9zBKJJQe4