Just who are these audiences pushing for this? The SJWs, who probably are being promoted on Twitter.

A lesbian couple in Finding Dory?

Via Daily Mail: The trailer for Pixar’s Finding Dory has been released to both fanfare and controversy after viewers pointed out the two-minute clip may feature a lesbian couple.
While some parents already declared they would be boycotting the follow-up to Finding Nemo after the latest trailer was released last week, others rejoiced and pledged their support for the film.
Audiences have been pushing the animation studio for greater LGBT representation, with recent campaigns on social media calling for Frozen’s Queen Elsa to be paired off with another woman in the upcoming sequel.
Finding Dory has already garnered considerable buzz for its June release after the latest trailer dropped last week, racking up more than four million views. At one point in the clip, Tank the octopus makes its way into a stroller, and two women turn around, shocked that the baby has suddenly transformed into an eight-legged sea creature.
One viewer suggested the women were a couple, and Twitter lit up with excitement over the possibility.
While subtly suggested gay characters have made an appearance in Pixar films like Frozen and Zootopia, viewers celebrated what could be the animation studio’s first-ever representation of lesbians.
Disney Pixar has not commented or confirmed the rumor, but fans were elated.
Twitter user @epicbookloover wrote: ‘Finding dory has a lesbian couple Pixar has gayness yes yes yes I am about to start crying so hard’
Others, like Twitter user @PerfectAlycia, poked holes in the rumor. She wrote: ‘Finding Dory may have a lesbian couple, or just two women standing next to each other idk-‘
Amidst the excitement were calls to boycott the film, but @_AllieNicole wrote: ‘pretty sure @DisneyPixar is gonna do just fine on @findingdory w/o the people promising to boycott it for minor characters, but you do you.’

Others pointed out that no one was upset when Ellen DeGeneres, one of the most famous lesbians in Hollywood, reprised her role as the voice of Dory.
Mattie Stretton wrote: ‘People going mental over a supposed lesbian couple in the Finding Dory trailer but forgetting the voice of f***ing dory is the queen of lesbians.’
The Gay & Lesbian Alliance Against Defamation (GLAAD) released an annual survey in April, assessing LGBT representation in film. Disney, along with Paramount, were named as two studios failing to feature a single gay or lesbian character in any of their films last year.
A social media campaign for the upcoming Frozen film has made a considerable impact, with Idina Menzel, the singer behind the film’s hit song Let It Go, chiming in to support those asking Pixar to ‘Give Elsa a Girlfriend’. ‘I think it’s great,’ the 44-year-old told ET, before adding, ‘Disney’s just gotta contend with that. I’ll let them figure that out.’
This comes at a time where audiences are clamoring for increased diversity in film and TV (according to whom, GLAAD?).
DCG
Please follow and like us:

GONE ARE THE DAYS WHEN DISNEYLAND WAS A PLACE FOR FAMILY FUN AND PROMOTED FAMILY VALUES. WALT DISNEY IS ROLLING IN HIS GRAVE RIGHT NOW. I WILL NOT SUPPORT OR PURCHASE ANYTHING FROM DISNEY AGAIN. VOTE WITH YOUR WALLET. PERVERSION IS PERVERSION. IT IS NOT NORMAL.

this is how they are using “feminism”…as a gateway for homosexuality.
I remember it basically started with ellen degenerate and the “kiss” on national tv, in the 90s, and now a movie for children featuring her voice has lesbians…only 2…this time
the only way to protect your child from the advances of hollyweird and society is to keep them out of the theaters and away from the tv.

this is how they are using “feminism”…as a gateway for homosexuality.
And cartoons, too, all the better to indoctrinate minds when they are young, blank, and malleable.

DCG . . . Excellent article. I am glad that you chose a picture of Ms DeGeneres that shows her in her “natural state,” rather than all glamed up. Disney has proven to be a huge disappointment to all of us. The only remedy, as has already been written, is to boycott their projects. The desire to indoctrinate the very young into thinking that this is normal behavior is exactly what is behind all this. I just hope that enough people will vote with their money to sink this ship.

I loved Finding Nemo, and this development makes me very sad. I have known that Disney is a battleground of good vs evil. In this moment there is no mistaking the fact that evil won.

I thought it was a cute movie too and even bought the dvd and then I realized while watching it with my children that it is basically about a “boy” fish that disobeys its “father” fish and has adventures as a result.
I donated the dvd after that realization.

Disney NEVER was family friendly, which I sadly did not realize until my children were grown! Perform an Internet search on YouTube for “Disney” + “illuminati” and prepare to be shocked with the highly sexual content drawn into the graphics of the cartoons, movies and artwork. Walt was a 33-degree Mason and there is a private Club 33 at his parks. He was also intimately connected to secret government agencies and Britain’s Tavistock Institute. I grew up in the 50’s and, even as a young child, always wondered why there was such a strong presence of English stories and actors… Read more »

Actually Sher I would correct you on one point, apparently walt was not a 33rd degree freemason (Nobody seems to have been able to find evidence of this, neither lodge/temple number or name.) for the time being it seems to be a ‘net rumor, and these sorts of things have a problem with actually helping the devil worshipers, as if something is said without any backing except hearsay, then it makes the “conspiracy” folks look like they don’t know what they’re talking about. However, this doesn’t mean walt was not connected to freemasonry, he was actually a member of the… Read more » 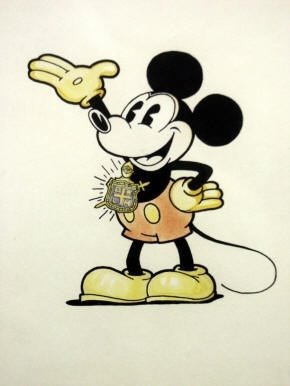 Good grief, Mickey Mouse is a Mason!
There really is no limit to their perversities, is there? 🙁

Sher is correct on Disney the man and his history. And Of Course, this latest Disney abomination is deplorable.
There is only one thing left to do: We conservative Christians have to infiltrate every platform on the internet and in the electronic world that we possibly can, and we have to go on the OFFENSIVE.
If you cannot go on the OFFENSIVE, you cannot win!

I like your style Steven, but the only thing an offensive will lead to is the enemy scoffing at and mocking our more vocal brothers and sisters in Christ, and using that to sway more lukewarm fence-sitters into thinking we are the enemy, which cuts down all hope for their salvation. Instead we should profess that we won’t be seeing this movie, we won’t be introducing our children to this culture, and there is no chance in hell that we will ever give them more of our money. Offer friendship to those who like what we say, and offer no… Read more »

You’re being defeatist, Mr. Graves: I DO NOT CARE ABOUT THE SALVATION OF THE LEFT. As a matter of fact, I hope, SINCERELY, that they all GO TO HELL, for this reason: God’s enemies are MY enemies! I shall hate them with a PERFECT hatred! We have to go on the defensive. But I know that, CORPORATELY, we WON’T, for this reason: We just can’t seem to get out of our Comfort Zone. Hence the Left knows when to strike, and at just the right angle, to embarrass us in front of ourselves! THIS is why we always lose! WE… Read more »

You’re wrong to think saving a lost soul isn’t well worth the effort. For every person who is swayed by our forgiveness and charity of love, Lucifer suffers a hard chip to his veneer of pride, and we do work that our Heavenly Father would commend, not condemn. It is defeatist to say that it isn’t worth the effort to hope to save them. It is defeatist to choose hatred over compassion, as hatred only enables our enemy to know that we fear the consequences they will bring on. You are right that we are sheep, and our shepherd is… Read more »

I saw the preview from the link and yep, those are two lesbians pushing a little toddler in a stroller…pixar also does a quick left eye symbol at the 1:09 mark of the butch lesbian.

Why can’t they use a proper traditional family and tell a nice story for once. Every Disney tale is about separation from parents, death, abandonment etc.
The media is a powerful weapon and is now seemingly being used against the family from every angle.

The family is supposed to be one father and one mother with children learning values from their parents. Find just one media source that will support that. The USA is supporting and trying to make normal perversion of every kind. Christians are a target and considered potential terrorists. God is being taken out of the conversation. I saw this coming, decided I was too old to fight with a 22 pistol and a shotgun. I decided that with all the power and might of the government, it could simply forget about me if I left. So I sold my furniture,… Read more »

Frankly, I am sick to death with all this tearing down and separating and denigration of a family.
We stopped a few years back of giving any of them one more dime. We used to be huge visitors to DLand, never again.
I scream back every chance I get.