Repeatedly, U.S. cities that raised the minimum wage demonstrated that doing so costs jobs — minimally-skilled jobs performed by the low income whom the Left claim to champion. But that fact won’t dissuade the Left. To quote my erstwhile faux-socialist friend Stephanie: “Don’t confuse me with facts! I’ve made up my mind!”

Dr Eowyn . . . I think we can earnestly say the majority of the leftists believe as does your faux-socialist friend Stephanie . . . “Don’t confuse me with the facts! I’ve made yup my mind!” . . . this kind of thinking is sparked by leftists lack of critical thinking and indulging in “how they feel emotionally.” The fact that there are now an estimated 5,000 less low-wage job available truly is something for everyone to cry over! How do people with no skills get a chance to learn skills when employers don’t want them–they want to “get… Read more »

All this does is increase the speed and desire for employers to automate. The secondary problem with this paradigm, after the elimination of much needed jobs, is that robots don’t need to buy anything so will end up putting their employers out of business. If the end goal is the elimination of the working people, it will suffice.

Josh . . . Thank you for bringing up something that I had never given thought to. Wow! That really is something to think about . . . thank you for the head’s up!

By now it should be obvious that one cannot hold these SJW views and be logical.

“Seattle’s minimum-wage law is boosting wages for a range of low-paid workers, but the law is causing those workers as a group to lose hours, and it’s also costing jobs” what about those who were laid off? will they scream “discrimination!” because someone else was allowed to keep their job? probably those who keep their jobs will not only work fewer hours, but work harder to make up the difference from not having laid off employees around…. (more money = fewer hours = more work = burnout = unemployment) looks like either way, the socialist practice leads to more unemployment,… Read more »

Raising the minimum wage is a job killer! – On the Patio

[…] via Shocker, not: UW study finds Seattle’s minimum wage is costing jobs — Fellowship of the Minds […] 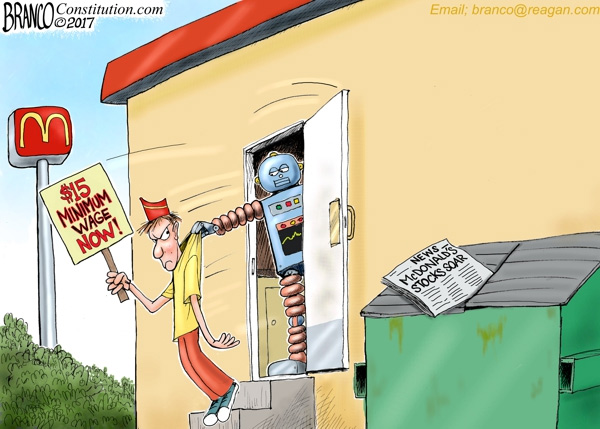