Yesterday, gisthehammer posted on Reddit these stunning side-by-side images of David Hogg (the media-hog student activist of the M.S. Douglas High School shooting of February 14, 2018 in Parkland, Florida) and Adam Lanza (the alleged shooter of the Sandy Hook school massacre on Dec. 14, 2012 in Newtown, Connecticut).

Not being certain about the authenticity of the Hogg image, I did an Internet search for images of Hogg and found these two (below left and right):

If they are the same person, Hogg would be an older version of Lanza, by six years; and Lanza would be a younger and thinner version.

It sure looks like the same person to me! Goid work! These people are all hired actors to promote Obama’s agenda (paid by Soros)

Same Adam’s apple, too, which is even more rare of a match.

Now that you mention it; when Hogg appeared on the scene, I thought that he reminded me of someone! Bingo!

That photo of “Lanza” is a small JPEG, so, as you know, it’s very pixelated, but If you look carefully at the noses, you will see they share the exact same shape and here’s the dead giveaway: the distance between the eyes and the shape of the bridge of the nose are the same. You will notice the same indention on the left between the eye and the top of the nose. Also, if you look at the eyelashes, they are the same shape, shade and thickness. The “Lanza” photo was heavily manipulated in photoshop. Are all the photos online… Read more » Yeah, “we call B.S.” alright! As Miche pointed out, that famous photo of Lanza has obviously been artificially manipulated. The image has been stretched or elongated, giving him a very unnatural, lengthy face. Considering the fact that it’s highly questionable whether or not there even was a real “Adam Lanza”, it’s not at all beyond the realm of possibility that the photo of Adam was really a manipulated photo of David Piglet from years ago, when he was younger. Even with the seriously degraded image of Lanza being what it is, the ears and nose comparison with Piglet are quite… Read more »

That Hogg loser reminds me of a quip from a truck driver a few year back: “That kid couldn’t get laid in a cathouse with a fistful of hundreds.”

Good one-the images are strikingly similar – with a few more tweaks they could be made into twins. Then it should go viral-nothing is too good for the little puke media-hogg. Don’t think they wouldn’t do it to anyone if they could.
He deserves everything coming to him-deal with this you loudmouth traitor.

Let’s not forget my friends that David Hoggwash’s father is an FBI agent. It is all a deception for sure…if it is on the terdstream media you know it’s a lie. Good investigating kids. Godspeed….

I actually feel a little sorry for Hogg. It is becoming a very strong possibility he was Mk.Ultra’d, possibly at the recommendation or allowance of his own parent. He never had a chance… how many people are there like that?

I didn’t read your comment till after I posted mine below…that’s exactly what I was thinking! There is plenty of that still happening, many kids in foster care come up missing…if you ever read “The Franklin Cover up” by John DeCamp, it’s like a play book for how these vile sick s.atanists operate! (spell check kept Capitalizing ‘satanists’ so I had to do the dot thing).

Alien… or should be: 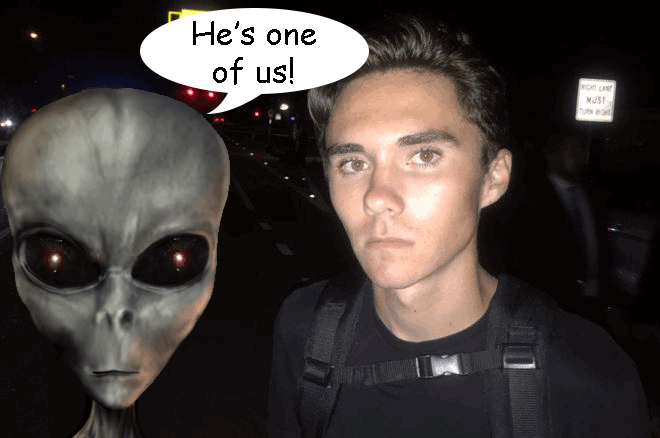 By Jove, you’ve nailed it!!

He looks mind controlled to me, they most likely have him drugged in the middle photo, a lot of the so called school shooters had the same dazed expressions with their eyes wide.

” Mk.Ultra’d”
What’s that??
They’re not the same person,but they look like they could be from the same family.

I suspect that David Hogg really is mind controlled, but that it is probably due more to his upbringing and his voluntary commitment to leftism [we Americans once called it communism] which feeds his revolutionary zeal. He has the contacts and background for it to be either way. I think his mother is a jewess who is or was with Planned Parenthood and his father is an ex-FBI agent who has connections to Cubic in Pompano, which is IDF connected and to, “CUBIC [which] is owned by BLACKROCK [over $5.7 TRILLION in assets], which is controlled by the Rothschilds.”. They… Read more »

“Florida shooting exposes need for stricter gun control, say Jewish groups” [February 21, 2018] “A spokesperson for the women’s organization Hadassah told JNS that the group supports all three of the legislative proposals under discussion in the aftermath of the shooting. Nathan Diament, director of the Orthodox Union’s Advocacy Center in Washington, D.C., told JNS that his organization “will likely support” all three of the gun proposals. He said the Orthodox Union “has long supported common-sense measures to reduce gun violence, including banning certain sophisticated assault weapons such as the AR-15 used in [the Parkland] attack. In a statement to… Read more »

“Jewish groups call for tougher gun control laws” “The Anti-Defamation League, B’nai B’rith International, the National Council of Jewish Women and the Reform movement were among the national Jewish groups that called for tougher gun control laws in the attack’s aftermath. “We mourn those callously slaughtered in Las Vegas and pray for the wounded. But our prayers must be followed by action, long overdue limits to the easy access to firearms.” The Jewish Federations of North America in its statement called on people, wherever they are, to donate blood. “These attacks are just the latest instances of senseless violence that… Read more »

“Jewish Groups Urge Passage of Gun Control Legislation”
[October 2, 2015]
“Major Jewish organizations are lining up behind President Barack Obama’s call on Congress to pass effective gun control legislation in wake of the horrific shooting and the killing of at least nine students at Umpqua Community College in Roseburg, Oregon, on Thursday.
The Anti-Defamation League (ADL) also urged the passage of “tough, effective gun control legislation.”
Since 1967, ADL has favored expanded federal and state regulation of the sale and transfer of firearms and other dangerous weapons, according to the news release.” [Continues]
https://jewishinsider.com/4080/jewish-groups-urge-passage-of-gun-control-legislation/

“Since the unspeakable – but, sadly, not remotely unimaginable – horror of the shooting in Parkland, FL, students across the country are standing up, using our voice and our power to say we will no longer accept the current level of gun violence in America. We are mobilizing in a wide variety of ways, both locally and nationally, for sensible gun laws. This is a moment unlike any in recent memory – and all over the U.S., Reform Jewish teens are leading the way. We take pride in this remarkable leadership, but pride is not enough. We need teens, young… Read more »

“Jewish Youth Groups Now Behind Burgeoning Gun-Control Effort”
[February 21, 2018 – Parkland in jew country, Florida]
“The student-led effort to change the nation’s gun laws has now received the support of the Reform movement’s 8,000-strong North American Federation of Temple Youth (NFTY), whose leaders said they were “inspired by our friends [in Florida] mobilizing their own community.”
https://jewishweek.timesofisrael.com/reform-youth-group-now-behind-burgeoning-gun-control-effort/

The article linked below has some information which remains much unknown. The article expresses clear leftist biases, but it has some interesting information within it, despite it’s puffery. The excerpts below are presented in a different order than they appear from inside the article. What was the time that the shooting was said to have happened, if Jeff Foster had taught Hogg that day? “Some critics and conspiracy theorists have accused Foster of pushing the Communist Manifesto. But Foster is no Communist. He’s not even a bleeding-heart Bernie bro. He’s a registered Republican who voted for Hillary Clinton.” – [Said… Read more »

Flanders took the trouble to be responsible by citing SPECIFIC facts and articles on Jewish groups’ advocacy for and leadership of gun control. One would think that as a staunch Second Amendment supporter, you would find the information noteworthy. If you disagree with Flanders, point to counter evidence. Instead of addressing substance, you go the “racism” route by hurling the anti-Semitic label.

I was only commenting on the fact that Flanders threw down 11 comments in a row on Jews.I apologize for the way I conveyed my thoughts,but I saw it not so much as discussing a subject as bludgeoning us with it. Again,I’m sorry.

Yes, I agree. He was kinda overloading it. 🙂

Dr. Eowyn, Thanks again for your understanding. I appreciate and respect your responses.

I can understand that frustration jumping as a first impression, Truckjunkie, and I don’t worry about the labels. I’m an old Marine vet of Viet Nam, so I’ve been called by different labels in my time. Usually it’s the leftists who call me Nazi or baby killer, of which I’m neither, although I no longer look down on the National Socialists as even I once did. If you’re a White man as I suspect then we likely have more in common than differences, other than in our views about jews. You can understand that I don’t like traitors, whether to… Read more »

Excellent info Flanders. I hope you keep all of your stuff in some type of file, as the posts I’ve seen of yours over the years are just awesome. It is imperative that we stay ultra-informed, because despite the protests, violence, etc that we see on the news and so forth, the VAST majority of the work done by our enmies is behind the scenes, in courthouses, board rooms, meetings, “lobbying lunches,” and things of that nature. Thanks for all your hard work Brother

Think about this for a second: If it is true that TPTB would parade the alleged Sandy Hook victim kids in the Superb Owl halftime show to openly mock the shit out of us, it is absolutely reasonable i.e. probable that they would do the same thing with Lanza/Hogg. The ultimate inverse, perverse satanic psy-op ever.

Makes ya kinda wonder why the guards, who had to know about Hogg’s anti-2nd amendment views, still bothered to provide security and why they didn’t opt out, assuming they had the option…

He was in NYC. You know any guard there denying service would be blacklisted by Bloomberg…

Doesn’t matter, both are evil in their own distorted ways.

What makes you think Hogg is under unbearable stress?

Here is a good site to review. It has been censored along with his You Tube accounts, but it still has good information.
“Florida Shooting A Definite False Flag”
“I don’t know about other people, but this girl really likes to smile after getting shot in the head.”
Flanders recommends that you may want to check out the full posting, but the lower part in particular, and near the very end where Trump is spoken about. [The owner of that site has now moved to a new home site].
https://birthofanewearthblog.wordpress.com/2018/02/24/florida-shooting-a-definite-false-flag/

What do I think? I think you have just blown my mind! Wow! The similarities are way too real to be ignored.

The picture of Lanza was considered to be Photoshopped. I”ve seen this explanation before. The perps have unlimited money to keep this hoax going.