Senate Majority Leader Mitch McConnell (R-KY) put the Deal to a vote to force Demonrats to take a public stand on the measure and so divide the Demon Party’s moderates and progressives. He tweeted:

”I could not be more glad that the American people will have the opportunity to learn precisely where each one of their senators stand on the ‘Green New Deal’: a radical, top-down, socialist makeover of the entire US economy.”

The final vote was 57 against, and 0 for the plan:

Ocasio-Cortez predictably mouthed off, calling the vote a political stunt and a “disgrace”.

I am puzzled, “43 Demonrats voted present” . . . . does this mean that they did not want to go on the record as being in support of this monstrous plan which would bankrupt our nation? They should be voted out of office at the next election, based on the fact that they are to stupid, and they did not vote “NO.” I suppose they felt that voting “present” would save them from the wrath of their state’s voters. I hope the voters are intelligent enough to kick each and everyone of these of these goofballs to the curb!

Voting “present” is the coward’s way of indicating disapproval, but not wanting the negative repercussions of either voting “yes” or “no”.

I remember years ago getting into an argument with a representative at a meeting. He said, “yeah, I didn’t like it, but I voted for it with grave reservations”.

I told him “if you had “grave reservations” why vote for it at all. He said “they’d call me unpatriotic if I did that”.

Yeah, it’s like an “Alford plea”. They get to not be held responsible. They still collect their pay.

It was Barak Insane Obama’s most tallied of votes when he was his own State of Illinois Rep at his State House….and then…..he stepped into an unopposed vote for his State Senatorship when the candidate was unexpextetly compromised by a divorce a the last minute….3-4 days before the election……and, BTW…..tho’ Barak INsane Obama voted “present” on most votes in his tenure as an Illinois state rep…he manage to show up and vote “NO” to a vote on live birth abortion that would have required medical care for a child born alive during an abortion. Like the present Gov of VA…..he… Read more »

AOC obviously has not learned that she should shut the hell up.

She is a moron. They ran a contest and she won: 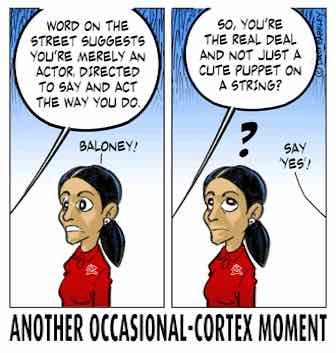 There is an emerging consensus, right and left, that Alexandria is located along The Spectrum, that there is a whole lot of nothin’ going on in her minor mind. I sense that she is burning through her 15 minutes of fame and they will be looking to dump her for a more polished actress. Plenty of morons in the pipeline, never a shortage. We can’t forget Dubya (I wish I could). One of my classmates knew him at Yale, said he indulged in Tony Montana – level cocaine abuse, coked his tiny brainpan shiny. By the time he got to… Read more »

AOC is a wind up toy. I’ve actually heard some people (even here!) suggest that her (their) “Green New Deal” is a good idea. Really? Remodel ALL the houses and buildings in ten years? Besides, a person could drown on the train to Hawaii.

And in Mexico they speak “Mexican”. And he lived right next door

Yeah, “Arbustita” was a real mental powerhouse. I saw today where Mexico was thinking about suing Spain for reparations. Looks like its spreading. Maybe Spain could sue the “ottomans” for reparations. Is there a statute of limitations on this?

Here are some of her handlers. These are the “Justice Democrats”. Isn’t it interesting that these PAC’s resemble terrorist organizations? 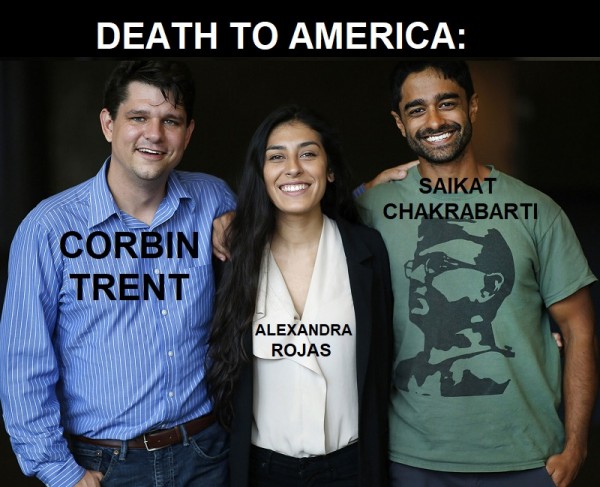 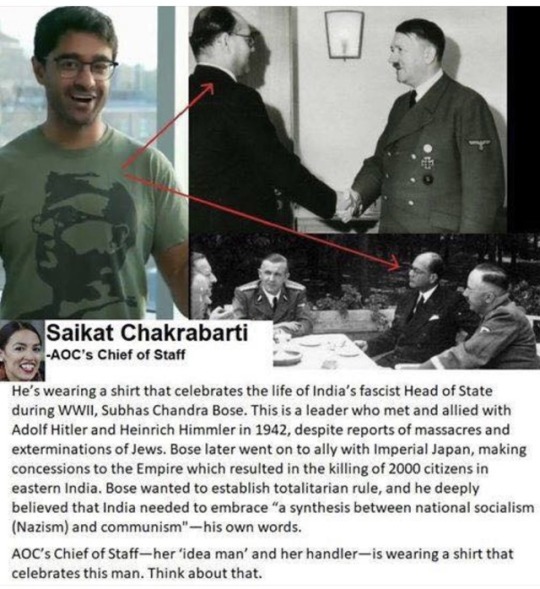 They are responsible for the two Muslimas doing all the freshman screaming as well. You can see that he has a “pretty impressive” role model. There was a time when this would have been pretty hard (impossible?), to do.

I guess they take Rubles AND Shekels.

Another great one, thank you, J.C.

I don’t understand. If a politician TRULY thought that there were only 12 years left before doom, wouldn’t you think they would want their hail-mary-saving-grace legislation to be voted on as fast as possible so that they could get their dominoes set in place to save the world???

I think if you just send money to Al Gore (cash only, in small bills), he’ll make it all go away.

He started it all, so let’s credit the fat boy!

Liberal logic is not designed to make sense.

I love it when they eat themselves. I hope they keep it up. 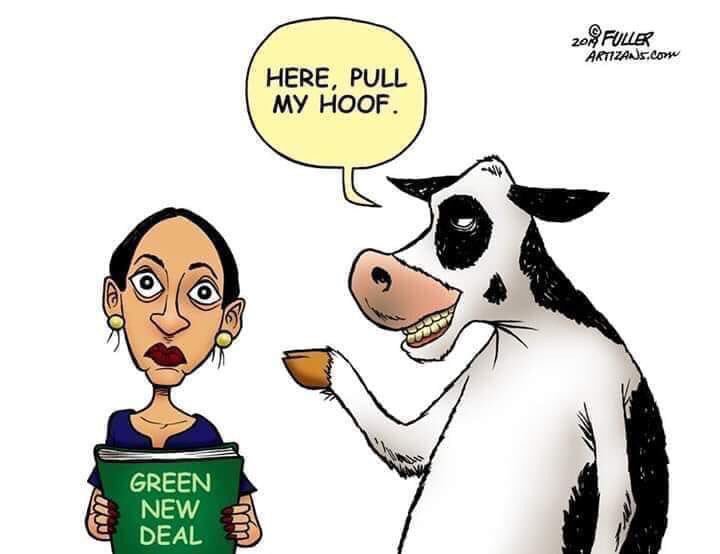 It’s pretty obvious that Obongo is still running most of them. It’s even more racist than under Obongo. It has to be coming from somewhere.

Listening to AOC (She Guevara) and Obama-Kamala (is my Willy Brown) Harris it is clear that they don’t care what anybody wants. It’s all about them and their boss.

There isn’t even a pretense of doing the will of the public. We need a couple of new parties (or no party, you decide).

Jim Hightower (yeah I know) once said, “some folks say we need a third party. What we really need is a second party.”

At its heart, a Green New Deal is a good idea. Being more conscious about environmentalism, ecology, energy and conservation is always a good idea. Unfortunately, AOC’s naivete’ got her in front of a bill full of bad implementation, government cheese and corporate corruption.

Instead of making AOC out to be an idiot (really, she is just naive), focus on the positives. Getting the public to stop being the selfish, dirty, corrupt, lazy and egotistical polluters too many are, through attempts to cleanup the joint ought to be commended. The evil is in the details.

The GND is intended to address “climate change”, preposterous on its face. Global climate changes cyclically, always has, always will, and there is absolutely nothing we can do about it, nor should we even try. Environmental pollution is an entirely separate issue which the demons couldn’t care less about. All they care about is power and control. AOC is an idiot, an imbecile, a stooge, possessing only the merest rudiments of intellect

Exactly right. They have not established to my satisfaction that anything is happening any differently with the climate. Even if they had they’d next have to prove it was due to us. Having “proved” that (which is rather unlikely), they would have to show how what they intended to do would fix it.

But, we can skip all that and just write a check to Al Gore.

Volcanoes add most of the CO2 to the atmosphere, human activity only 3%. CO2 becomes “saturated” with IR radiation at 60 PPM. Anything over that is irrelevant. It is a very weak “greenhouse” gas. It constitutes .004 percent of the atmosphere, an innocuous trace gas that is nevertheless vital to life. And they want to regulate it as a pollutant. Because global warming. There is no global warming. There has been a slight cooling trend over the past century. It’s going to get colder

I can’t tell you how many times I’ve made the same argument with how miniscule the %age of CO2 in the atmosphere is, and that volcanoes have a much bigger impact on global warming, especially underwater volcanoes warming the oceans, and probably melting some antarctic glaciers from underneath. Water vapor comprises about 96% of “greenhouse gases”, and it’s funny how liberals try to debunk it, especially the effect of volcanoes, and how the world endured the “year without a summer” (1815 or 16, I believe). If you told them that trees convert CO2 into O2; that increased vegetation from more… Read more »

In the first place it is a large and complex system. I doubt if we even have an adequate understanding of it to determine what is considered “normal” and what is “abnormal”. We would have had to study the entire thing over a prolonged period of time to even get a sense for whether patterns were changing or we were simply experiencing “normal” fluctuations due to phenomena like you describe. After we did all that we would then have to decide what, if anything, we humans were doing to negatively impact this and if it was sustainable. We haven’t done… Read more »

Geologists are now beginning to see that the number of undersea volcanoes has been grossly underestimated. Ocean floor volcanic activity almost certainly accounts for the periodic upwelling of warm Pacific water that subsequently warms the atmosphere and drifts eastward to S. America, usually arriving around Christmas, hence El Nino, the child. And there is substantial evidence that diminished solar activity somehow results in increased volcanic activity. “Climate” is formidably complex but is reduced by the leftard alarmists to comic book simplicity, El Nino causes climate change and climate change causes El Nino, and that’s like saying joblessness causes unemployment. And… Read more »

AOC is not only SUPREMELY ANNOYING, but she is as DISINGENUOUS AS HELL!!! Make No Mistake: AOC may have been selected by an audition, and that’s a bad practice, but she is straight out of the communist playbook. IF she is given the chance, she may well prove herself to be MORE DANGEROUS AND EVIL than Hillary Clinton! Don’t say, “It can’t happen here!” It most definitely CAN. Do you honestly believe the American public has any brains at all??? Our evil overlords will see to it that we with brains and honesty will be outvoted!!! Calling AOC a “bug-eyed… Read more » 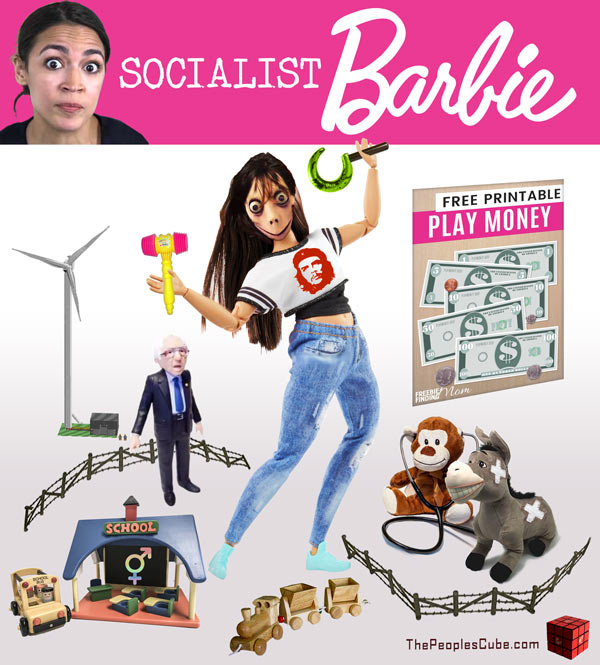 The primary driver of climate is solar activity. As we enter the grand solar minimum we are also entering a period in which the global climate will cool. The only question is to what extent. But it’s going to get colder on average in the coming decades, possibly much colder, although an ice age is very unlikely. At the same time the GND and other similar proposals will deprive us of our access to so-called “fossil fuel” derived energy, essential now to the survival of the human race, not to mention Western industrial civilization. So if enacted there will be… Read more »

AOC is an idopathic moron. She is promoting JUNK science with no educational background, .and now, she is blaming asthma (with no medical experience) on global warming. I raised a severe asthmatic as my FIRST child……I delayed the advent of our second child until I could understand medically and successfully raise our first child with his condition. And, I might add, both his father and I worked in a medical unit during this time, so we were NOT medical idiots, as is AOC. In the absence of actual choking/killing/oxygen-robbing atmospheric conditions due to severe air pollution (has happened in PA… Read more »

Comments worth a read as well

Spot on re: asthma. It’s multifactorial. The upsurge in cases may have something to do with vaccine adjuvants as well. Did you mean idiopathic, cause unknown? It fits either way but with her the “etiology” of her imbecility is known: an extra gene for stooopid. Rare but not rare enough unfortunately. As for oxygen-robbing atmospheric conditions, AOC is at the top of the list. Whenever she runs her mouth all she manages to do is use up our oxygen

Just thought of something, for what it’s worth. In the 1968 Prague Spring, Alexander Dubcek presented what he called “Socialism with a human face”. We owe AOC a minor debt of gratitude for revealing to us the true face of socialism; socialism with a crazy, stupid, vicious face. As if we didn’t already know