It is said that a measure of a person’s character is how you treat people whom you don’t have to treat nicely, i.e., people who are your power subordinates and underlings.
By that measure, Hillary Clinton fails utterly, for it is well known that she treats her underlings with dismissive disdain and contempt.
When her husband was President, people were told not to look at or speak to her if they happened across her in some hallway of the White House. As recounted by Ronald Kessler in his book, First Family Detail, former FBI agent Coy Copeland said that within the White House, Hillary had a “standing rule that no one spoke to her when she was going from one location to another. In fact, anyone who would see her coming would just step into the first available office.” A former Secret Service agent said, “If Hillary was walking down a hall, you were supposed to hide behind drapes used as partitions.”
Hillary was and is especially rude and contemptuous toward those charged with protecting her with their lives — Arkansas state troopers (when Bill was governor), military aides, and Secret Service agents whom Hillary treats as if they were her servants. See:

But those pesky “little people” have teeth and they bite back.
It turns out that the Secret Service is the source of leaks on Hillary’s rapidly deteriorating health.
According to InfoWars reporter Joe Biggs, during the Republican National Convention last June, two Secret Service agents approached InfoWars and asked to speak to them. Biggs describes what happened, beginning at around the 5:30 mark of the video below:
[youtube=https://youtu.be/R9L9ZiS7APE?t=5m30s]

“The Secret Service contacted me. They said that Hillary Clinton has Parkinson’s disease. They [Hillary’s people] spent over a quarter million dollars on these stairs…to allow her to step down from the vehicle to the ground because she has trouble walking. They [Secret Service] said that any kind of flashes or strobes will set her off into a seizure, and that’s why they wanted to come us. They wanted to contact us and give us information because they knew we [InforWars] would be able to get this out. [Unlike the MSM,] we wouldn’t be scared to do it. And you know it really makes a lot of sense when you watch all these videos. The fact that she’s refusing to do…these news conferences.”

Hillary had not done a press conference for 8½ months. Her last press conference was on December 4, 2015. (Washington Post)
At this point, Alex Jones makes the observation that Hillary’s campaign rallies seem to have fewer flashes and strobe lights as Trump’s rallies. So Biggs proposes that InfoWars brings cameras with flashes and strobe lights to one of Hillary’s rallies and see if they’re stopped at the gate and barred from bringing the equipment inside.
Biggs concludes:

“It’s coming down to the wire. Her health is fading very fast. And it kind of makes you wonder what’s gonna happen, if they’re really trying to lift her up. I mean it’s almost like this is the [movie] Weekend at Bernie’s. They’re doing everything to hold her up. You see these guys walking alongside of her, injecting her with different stuff…. Just to keep her going, a little bit more, a little bit longer, that’s what they’re trying to do. It’s so confusing to try to find out why they’re trying to push her so far.”

Here’s a news video of Hillary, asked a question by an NBC reporter, having a brain seizure on camera:
[youtube=https://www.youtube.com/watch?v=lJjHTeo6mVw]
On Hillary’s rapidly deteriorating health, see:

A woman that has treated those that has guarded her sorry rear for years and her treatment of them. What did she expect? Loyalty? A woman with such a hideous disease and still running sure makes me curious as to what their plans really are. Is she being used to continue BOs admin. or for a victory they have doubts that Biden can give them. I feel there is something going on, that with the left insisting on continuing to drag her across the finish line, why? She can’t possibly nor should she ever have the keys to the code.… Read more »

Hillary’s too blinded by ambition to see she’s the ultimate “useful idiot,” especially on Nov 9th if those “Arkancide” trends continue…

MSM, Politico disparaged “conspiracy theory” on Hillary’s health this AM. How long can they keep a lid on this VOLCANO!?

I mentioned this the other day. My wife had the TV on and they were whining about this all day. It was the “outrageous indignation” ploy. “How dare they?” What was weird was that they kept playing video clips of her that begged question of their point. I had to wonder, can they not see the problem, or are they just hoping that the audience is too thick to notice. Everyone involved in this, from the party hacks, through the workers, to the salesmen (excuse me…”salespeople”) in the “media”, are responsible for creating and sustaining a traitorous and dangerous lie.… Read more »

” We don’t have prisons large enough to hold them all.”
Alcatraz is vacant,I believe. It’d be worth the expense to pipe in all the utilities and upgrade the surveillance and guard towers,for THIS purpose.

Why waste the money. Just put ’em in there, don’t feed ’em. It’ll take care of itself.

Naaaahh-THAT’D be sinking to THEIR level…..

For something THAT important…., I’m willing to “sink”.

‘Til nov 9th, or they’ll be hell to pay from the Left…

People who sell their souls to the devil always reimburse their owner and she and Bill apparently don’t understand that they are forever in debt.
I predict that she will soon get a cold, hard look her balance sheet.

Ever notice how Hillary always takes people’s phones so she can control when the picture is taken? I’ve always wondered if it has something to do with the flash going off on her own terms.

Katie . . . that is such an excellent observation. Now that you mention it, we see that very thing . . . her taking the phone of some person who wants a selfie into her own hands and taking the picture! I must admit, I had noticed that before, but did not particularly intellectualize the significance of that action. She is doing it so that she can prepare herself for when the flash comes, so she is not taken by surprise. You’re really cookin’ on all four burners! Thank you for the great observation. 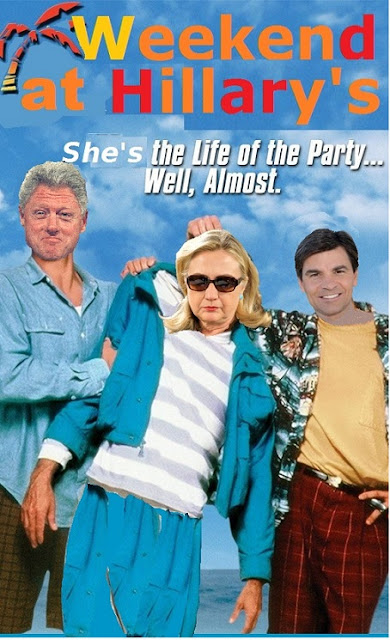 Must be an old photo. She looks better there than on tv.

Weekend At Hillary's (Sorry Bernie) | Finding Trout In Your Milk?

[…] Source: Secret Service is source of leaks on Hillary Clinton’s deteriorating health | Fellowship of the Mi… […]

Even the picture that shows Bill and Killary “holding hands” while they walk, seems to be a lie. . . . . since we already know there is not much love loss between this couple. He is no doubt stabilizing her while walking by holding her hand.
I am glad that finally the Secret Service is getting their own by telling the truth about this old crone.
I hope that her health continues to plummet, until there is no denying by anyone that she is amongst the walking dead.

Laura Bush wrote in her book that she did a meet and greet with 9/11 responders. Killary was there and Killary was the only one who didn’t stand to shake hands with the responders. Either she was rude (that’s a given) and/or she couldn’t physically stand for the whole time to pay her respects to the individuals. (Bush didn’t surmise as to why Hillary didn’t stand, she just noted that.)

She has the personality of a reptile. She grins and drools over anyone who might have lucre for her and Willie’s “fund”. Anybody else is a waste of her time. Put a dollar bill on a fishline and she’ll follow you anywhere.

If she has multiple systems Parkinson’s, that explains the bladder and the cough.

they would be the ones to know best…what a disgusting job. I wonder how many have quit work because of her?

Ha, ha, I can imagine that conversation. “I just drew the Hillary assignment. Wow, sorry buddy, who did YOU piss off?”.
If they did that to me I’d bring a whip and a chair.

I have a feeling that’s probably what they say…
it would be awesome if they all walked out on their “assignment”.
would hellary’s supporters volunteer to fill in the vacuum from the SS and throw away their lives for her? (they’ll do it anyway when they vote for her)

That’s a good question. Judging by the way they spring into action to protect their demon when she shorts out, I’d say they are pretty much programmed themselves.
I DO believe that the cure for her personality disorder would be something like that. If she insulted me I’d leave her high and dry in Fergeson.

This picture says it all:

I’ve often thought of what would happen if there was a shooter in the crowd;the S.S. men charged with protecting her would have to decide quickly,”Should I jump in front of her,maybe stop a bullet meant for her,or maybe have the safety catch on my holster stick,and be “just a moment” late?

Now that I’ve seen the catheter, whenever I see “Hillary” and “Leaks” on the same title , I giggle. I admit I have a 4th grade sense of humor.

Alex Jones also had Steve Piecynik on. Dr. Piecynik is a medical doctor and a board-certified psychiatrist, and he has worked for the CIA in the past. He said that the Secret Service’s primary constitutional responsibility is NOT to the First Family, but to the safety and security of the United States. Thus, he argued, that this would trump (no pun intended) any and all secrecy regarding the President’s health, or any Presidential candidate’s health, at least when the health matters are as serious as the allegations state. The Clintons are “High Plains Grifters” and they have build their entire… Read more »

Karma… it’s a killer of a bitch. Or, in this case – a bitch killer! The real question is, “What’s next after she’s (s)elected and easily thrown out with yesterday’s trash?” Komrade Kaine? Hmmmm, I believe Holger Danske is stirring…

It would be interesting if someone were to get close to her with a strobe light or some other kind of flashing device. Personally I think HRC and Bill both have been under a flashing light sometime in the past while being “programed” or “brainwashed”. Maybe even trying KUNDALINI https://www.youtube.com/watch?v=H1ax8YE2AIY
Also, off topic but proof the swamp is draining. Any of you have some spare time? https://www.usajobs.gov/GetJob/ViewDetails/498400000