From KESQ News Channel 3: Border Patrol agents seized over $82,000 of methamphetamine and arrested a man previously convicted of sexual assault on a minor over the weekend.
Saturday evening, agents arrested Guatemalan resident Luciano Pablo-Martin, 48, near downtown Calexico after he tried to make an illegal entry into the United States.
Records checks on Pablo revealed he was previously deported from the U.S. on February 13, 2004. Agents also discovered that Pablo had been arrested by the San Diego Sheriff’s Department for lewd acts with a child under 14 twice, on November 14, 2003, and again on June 9, 2014. Pablo was convicted and sentenced to separate prison terms on each conviction.
“Here we have a case of an illegal alien who was convicted of a heinous crime against a minor, not once but two times,” said Assistant Chief Patrol Agent David S. Kim. “This subject preyed upon one of the most vulnerable segments of our communities, our youth. Our agents encountering and arresting him will ensure he is not released back to our communities.”
This was not the first incident agents dealt with Saturday, earlier in the day, at around 9:15 am, a 24-year-old U.S. citizen was arrested for allegedly trying to smuggle methamphetamine.
Agents discovered 15 vacuum-sealed packages wrapped in cellophane hidden in a compartment within the vehicle’s roof during an inspection at the Highway 86 checkpoint in Borrego Springs. The packages tested positive for methamphetamine and weighed a total of 18.33 pounds with an estimated street value of $82,485. The subject, vehicle, and narcotics were turned over to the Drug Enforcement Administration.
DCG
Please follow and like us:

Sanctuary cities & states violate federal laws, including 8 U.S.C. 1373, a federal statute that promotes information sharing related to immigration enforcement and with which compliance is a condition of Byrne JAG grant awards.
Can any lawyer among our FOTM readers tell us if American citizens can launch a class-action lawsuit against sanctuary jurisdictions?

Dr Eowyn . . . . Now that is certainly an idea that I could get behind . . . “Can any lawyer among our FOTM readers tell us if American citizens can launch a class-action lawsuit against sanctuary jurisdictions? If this were possible, I should imagine that it would scare the living daylights out of these communist leaning politicians who hold positions of power among state, city, country jurisdictions.
Way to go Dr Eowyn, that is truly a superb idea!

But he’s a dreamer!

There are many ways laws can be applied to these repeat offenders so that they CANNOT DO IT “AGAIN”, carry it out and it’s over.

Alma . . . . this is the thing that is so grievous, they are like yo-yo’s . . . they just keep coming back again and again. There needs to be a “permanent” solution to this. I just don’t know what the answer is, but what we are doing right now is not working !!! I must agree with you since the ways we have tried to corral these low lives just doesn’t work, then perhaps we do need to carry out a method that will render them so that they “CANNOT DO IT AGAIN !” These people come… Read more »

This is always a problem. I keep saying, over and over, that it isn’t enough to have evidence. There has to be a will to prosecute. It is true that it is illegal for an official to ignore a known crime, but they do it all the time.
If a DA in California (for example) thinks that prosecuting illegals will put him in bad smell with the electorate (eligible or not), well, you get the idea.

lophatt . . . That is an excellent point! Perhaps, the greatest effort must be applied to politicians who are in power to bring about a change, even if that means they must go to prison in order to “change their thinking,” then you zero in on the various DA’s. If they became aware that their lack of carrying out the duties of their office could result in being indicted, and possibly jailed for their inaction. I would think that that would start to change their feelings. If people are so worried about what society thinks, and if that slanted… Read more » 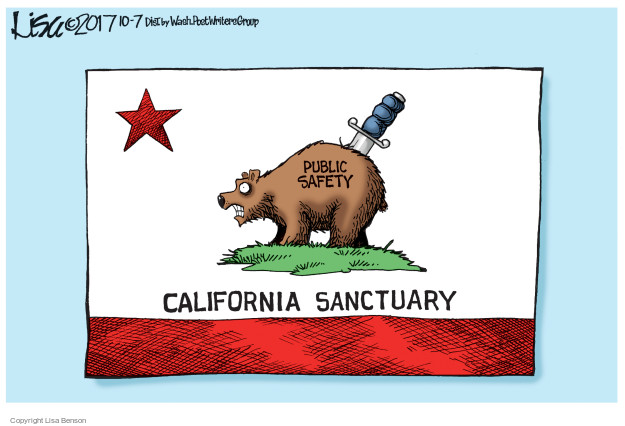 Could the President send a Federal Judge and a dozen US Marshals to Ca. to handle Federal business,bringing California,kicking and screaming,into Federal Immigration Compliance?

Reblogged this on On the Patio and commented:
California, This is all you! Keep up the good work asshats! We will send you the bill when we get done doing your job. Oh! Wait! You’re broke you say? Yep! You really are.