Don’t hold your breath that anything will become of this. Demorats in the swamp are never held responsible for anything.

Heck, I’m sure the media won’t even report it because they’ll consider it “disinformation.”

The FBI’s subpoena of a laptop and hard drive purportedly belonging to Hunter Biden came in connection with a money laundering investigation in late 2019, according to documents obtained by Fox News and verified by multiple federal law enforcement officials who reviewed them.

It is unclear, at this point, whether the investigation is ongoing or if it was directly related to Hunter Biden.

Multiple federal law enforcement officials, as well as two separate government officials, confirmed the authenticity of these documents, which were signed by FBI Special Agent Joshua Wilson. Wilson did not immediately respond to Fox News’ request for comment.

One of the documents, obtained by Fox News, was designated as an FBI “Receipt for Property” form, which details the bureau’s interactions with John Paul Mac Isaac, the owner of “The Mac Shop” who reported the laptop’s contents to authorities.

According to multiple officials, and the FBI’s website, “272” is the bureau’s classification for money laundering, while “272D” refers to “Money Laundering, Unknown SUA [Specified Unlawful Activity]—White Collar Crime Program,” according to FBI documents. One government official described “272D” as “transnational or blanket.”

The documents state that the subpoena was carried out in Wilmington, Del., which falls under the jurisdiction of the FBI’s Baltimore Field Office.

“The FBI cannot open a case without predication, so they believed there was predication for criminal activity,” a government official told Fox News. “This means there was sufficient evidence to believe that there was criminal conduct.”

Those dastardly Russians hypnotized Hunter to sign paperwork when he turned in laptop and got third parties to send e-mails about Hunter and stuff that’s documented on the laptop, too. The fiends! 😉

Strangely enough,there are STILL a few “reputable” pundits who aren’t aware of the child-porn found on this ‘puter,which I think is every bit as important as the political stuff. It’ll prove that both Shotgun Joe and his Son are pedophiles. I was told there was a SECOND computer,but I think my “source” meant the external hard drive he was using to back up info. I believe THIS was included with the laptop.

Smoke crack while gettin’ freaky with jailbait? Well, Hunter would… and video himself doing that.

“Heck, I’m sure the media won’t even report it because they’ll consider it “disinformation.””

I don’t care if the media reports on it or not. Matter of fact, maybe they ought to be ’embedded’ with the Bidens in the hoosegow if they like covering them so much – the lot of them – they all knew then and know now what’s been going on. I don’t need to hear all the gory details. Just wanna see Joe and Hunter and the others doing the perp walk.
TRUMP – PENCE 2020, 2024, 2028 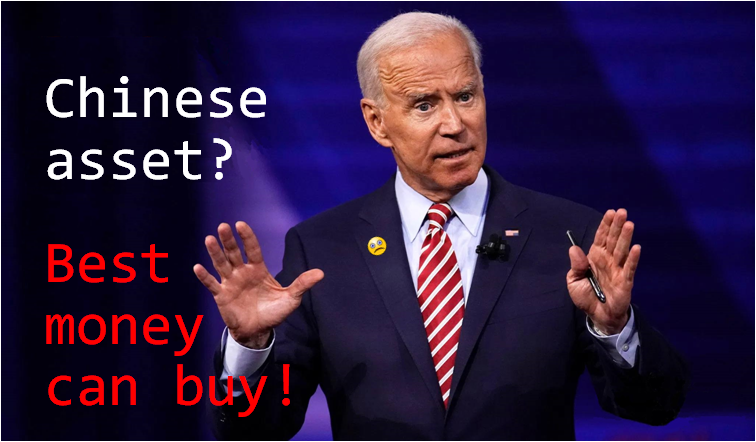 I can’t watch the debate which is now on. I detest the media. And ChinaBoyBiden will get asked his flavor of ice cream and if he had a nice week. (I’m glad the President released the video of the 60 Minutes interview before it was edited w/ Leslie Stahl whose shelf life is over;) BTW the woman that is hosting the debate is supposedly black. Really? Good to know;-/

I decided not to watch either. I already know who I’m voting for.

She was a better moderator than Chris Wallace…

would anyone not believe the Chinese placed the crack pipe there for more control over this lowest form of life. no one gets in or leaves China [ except high ranking foreign people ] without turning over their laptop of smart phone??

I do so fervently hope that an investigation of this matter will be forthcoming. It does not bode well that the FBI had the contents of the hard drive in their possession for months and months–yet nothing was ever done. God Will, Trump will will in a little over a week . . . one of the first acts that needs to be attended to is GET RID OF THE DO NOTHING HEAD OF THE FBI, and clean house at the DOJ. All of the Swamp Creatures need to either go to jail, or go down the road.

I cannot for the life of me envisage Donald J Trump calling Joe Biden on election night to concede the Election to a known Pedofile and total traitor to America.