Rosie O’Donnell says Biden should drop out of presidential race: “He’s not the future of the democratic party”

From Yahoo: Rosie O’Donnell is calling for Joe Biden to drop out of the 2020 race for president.

During a Tuesday appearance on CNN’s Cuomo Primetime, the comedian and TV personality cited the 76-year-old former vice president’s age and ideas as the reasons she’ll be backing someone else seeking the Democratic Party’s nomination.

“I think that Joe Biden should say, ‘I’m gonna to sit this one out,’” O’Donnell said. “‘I’m gonna be an elder statesman, and I’m gonna advise.’ And then whoever is the nominee, I think, should think about how to best use somebody with the experience that Joe Biden has [gained] in all these years of politics. But he’s not the future of the Democratic Party.”

O’Donnell’s preferred candidates are Massachusetts Sen. Elizabeth Warren, who she’s supported in the past, and California Sen. Kamala Harris.

Cuomo pointed out that the latest CNN poll showed that Biden is the candidate with the best chance at defeating the Republican Party’s candidate, President Donald Trump. How, he asked, could someone argue that Biden isn’t in the party’s future?

“Well, because he’s antiquated in a lot of his thinking, a lot of his beliefs,” O’Donnell said of Biden. O’Donnell also said Democratic House majority leader Nancy Pelosi should impeach Trump, although the speaker has said she would rather see Trump lose an election.

“Because this is not the way to deal with Trump, as someone who had to deal with him for a decade before he became President of the United States, relentless, unending abuse from him,” said O’Donnell, who publicly feuded with Trump for years before he moved into the White House.

“This is not how you deal with him. You don’t let him go and give him a long lead,” she said. “You gotta reel him back in and confront him at his own level. To turn around and say we’re not going to have an impeachment inquiry, I think is a gross injustice, and I think Nancy Pelosi is making a huge mistake.”

O’Donnell was on the show to promote Lights for Liberty, the hundreds of vigils that will be held around the country Friday to protest the treatment of immigrants at the United States border.

“This has to be the issue of the election,” the former daytime talk show host said. “I think it’s gonna be, because mothers and fathers across the country are gonna say, ‘Enough. I can’t and will not tolerate this on my watch.’”

That pic of O’Donnell perfectly captured her true self.

She’s such a skank. Who cares what she thinks. Take all of her money away and what do you have? zero, zilch, nada, goose egg. Plus as Churchill said ‘ I may be drunk but you are ugly and tomorrow morning I shall be sober’.

Didn’t the lesbian move out of the country yet? Hahaha, lier! liar! The party is in internal turmoil, the new class and the old class fighting for position nobody’s thinking who best can win the WH in 2020. Brahma Kamala and Pocahontas don’t have any substance in their agenda and Pedo Joe’s skeletons keep flying out the closet. As they debate we will see who goes and who stays, as for the obnoxious Lesbo Rosie, nobody pays attention to what she says.

Fat, ugly, utterly unfunny, and perverted Rosie should be made aware that the demonrat party has no future. Fauxcahontas? Harris? You cant be serious. Creepy senile pedophile Joey Lunchbucket is the best you’ve got. Think about that

I have, its really pretty funny. Look at all of them. All of them trying to bribe the citizenry with free stuff that they’ll have to pay for.

They’re all as crazy as Grandma’s old yellow hog. Look for Big Mike to throw his hat in. Big Mike and Buttplug. Now there’s a lineup unlike anything in the history of Communism.

I think she should organize a tour of Red China. She could take Lena Dunham, Barbra Streisand and the rest of the Maoists with her. All she needs to do is drop her passport off on her way out of the country.

We’ve got Somalis who hate America in Congress, we’ve got ex-first ladies (gentlemen?) who think blacks should be the majority. Congress is thoroughly infiltrated with commies.

Looks like we need another Joe McCarthy. Why would this pile of poop get an audience anyway? Of course, why do any of them listen to Big Mike?

Well, the old girl actually is part right. As a matter of fact, I don’t see the Democratic Party having a future, nor should the party of hate have one.

Yeah, I don’t either. They HAVE to “win” or they’re toast. If all things were equal (and honest!), they would split the party into Communists and Communist wannabes. Of course that would make it impossible for them to “win”. All anyone has to do is look at the current dynamic with Nasty Nancy and the Hate America Squad led by AOC. If they were on the up and up, they would squash them like bugs. But they’re not. No, the owner’s want it this way for a reason. At the very least (and I think its more than that) they… Read more »

As long as Big Tech & globalists are on the Democrats’ side, they still have a future – especially when the President refuses to actually confront the problem instead of just tweeting about it.

Yeah, today she accused Trump of having an incestuous relationship with Ivanka. I wonder if he’ll “tweet” about that? I think I’d have my lawyer do the “tweeting” for me.

What puzzles me most about this article, is why it’s here and who cares what that disgusting old dyke thinks about any topic at all, much less her opinion about our national leadership.

It exposes her as being a discriminating ageist. Their masks are eventually removed.

I have to wonder what possessed Cuomo to think having her on his show was worthwhile. *She* is the epitome of no-longer relevant. DCG exposing *that* farce here serves to show what a joke Cuomo is as well. Today’s Democrat Party (and no, it’s not the “Democratic” Party) is becoming the embodiment of insanity.

There’s some sort of built in irony to any sentence that begins; “Rosie O’Donnell says….

Why would she imagine that anybody cares what she thinks? After all, she’s no spring chicken herself and her lifestyle is starting to take its toll. In fact, Biden looks “better” than she does, and he’s older.

I’ll have to start looking for a card intended for someone who died of penis envy. 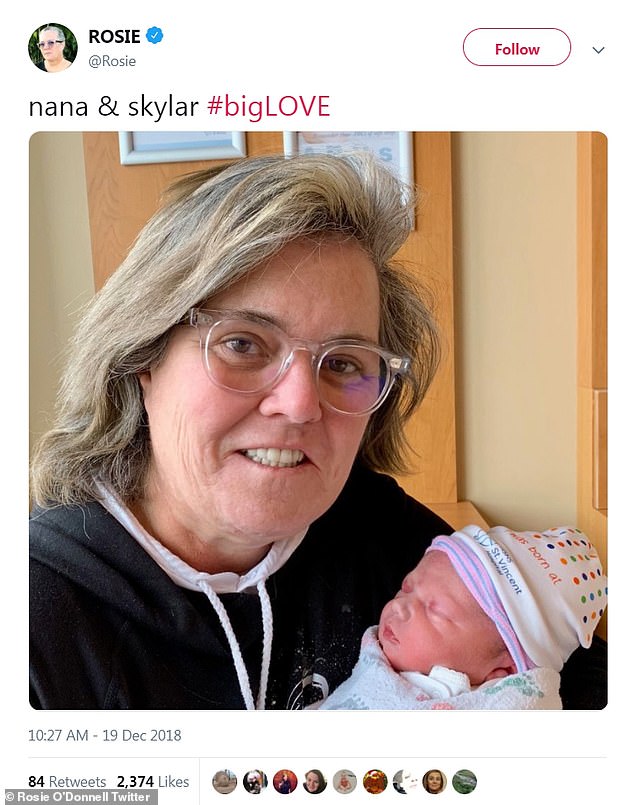