Wonder why Van Jones didn’t ask Jay-Z about his relationship with the vulgar Harvey Weinstein?
From Hollywood Reporter: Shawn “Jay-Z” Carter sat down with CNN’s Van Jones for the premiere episode of The Van Jones Show.
The Grammy-winning musician offered his thoughts on a wide range of topics, including the #MeToo movement and President Donald Trump’s recent “shithole countries” comments.
“It is disappointing and it’s hurtful,” Jay-Z said of Trump’s infamous comments regarding immigrants from countries such as Haiti. “Everyone feels anger, but after the anger, it’s real hurtful. Because it’s looking down at a whole population of people, and it’s so misinformed, because these places have beautiful people and beautiful everything. This is the leader of the free world speaking like this…somewhere along his lineage something happened to him. Something happened to him, and he is expressing it in this sort of way.”
Jones asked Jay-Z about his thoughts on Trump’s actions during his presidency, particularly as they pertain to African Americans and “dropping black unemployment.” Jones asked Jay-Z if those actions made Trump a good leader. “No, because it’s not about money at the end of the day,” the rapper responded. “Money doesn’t equate to happiness. It doesn’t. That’s missing the whole point. You treat people like human beings. That’s the main point.”
On Sunday morning, Trump responded with a single tweet: “Somebody please inform Jay-Z that because of my policies, Black Unemployment has just been reported to be at the LOWEST RATE EVER RECORDED!”
When asked about the current #MeToo movement aimed at gender equality and the end of sexual harassment, Jay-Z said, “It’s almost like we normalized” sexual harassment. “For women to go to work knowing that this sort of abuse was happening every day, you can look logically and say, ‘Why would you stay there?’ ” he continued. “What is the alternative? You have to survive in America. In order to survive you have to normalize it. So for it to get uncovered and the world to correct itself — this is what has to happen.”
Let’s take a look at some of Jay-Z’s vulgarity, shall we? From his misogynistic song, “Big Pimpin:”
“You know I – thug em, fck em, love em, leave em Cause I don’t fckin need em Take em out the hood, keep em lookin good But I don’t f*uckin feed em First time they fuss I’m breezin Talkin bout, “What’s the reasons?” I’m a pimp in every sense of the word, bitch Better trust than believe em In the cut where I keep em til I need a nut, til I need to beat the guts Then it’s, beep beep and I’m pickin em up Let em play with the dick in the truck Many chicks wanna put Jigga fist in cuffs Divorce him and split his bucks Just because you got good head, I’ma break bread so you can be livin it up? Shit I.. parts with nothin, y’all be frontin Me give my heart to a woman? Not for nothin, never happen I’ll be forever mackin Heart cold as assassins, I got no passion I got no patience And I hate waitin.. Hoe get yo’ ass in”
Lovely stuff, right? Guess his vulgarity is allowed in the name of his “art.”
Hypocrite.
DCG
Please follow and like us:

If you’re having President problems I feel bad for you son…
I got 99 problems but the TOOF ain’t one!

Ideas have consequences, causes have effects, and listening to Jay-Z is a one-way ticket to life in the shtholes of this world—but Jay-Z’s pissed at Trump? When you think about it, maybe he’s not as stupid as he sounds since Jay-Z’s and Maxine’s race-baiting and welfare-pimping careers depend on keeping their people down and out disaffected outsiders living in shtholes forever.

Dan . . . . I could not possibly agree more! Those who do crawl out of the ghetto and do make it big, do not want the rest of the inhabitants of the hood to get out also. They just want to sit at the pinnacle of success and preside over the rest of the plantation’s residents.

Reblogged this on kommonsentsjane and commented: Reblogged on kommonsentsjane/blogkommonsents. Now the real vulgar stuff from Jay Z – you can’t have it both ways. Rapper Jay Z says “Trump’s vulgar immigrant comments are “hurtful.” Read and weep: And this isn’tt hurtful to women? When Jay Z wrote this piece, was he talking about his wife and daughter – who have high maintenance accounts. “Money, Cash, Hoes” lyrics Jay-Z Lyrics “Money, Cash, Hoes” [Jay-Z:] Turn the lights all the way Turn the lights all the way down What Uhhuh Yeah (Uhh) Come on Big flow (GGRRRRRR) Come on yeah come on… Read more »

kommonsentsjane . . . .that is just the biggest amount of drivel. If you were to record the ravings of a mad man–it would not sound any different.

All of these soulless idiots must be droids, because they all use the same verbiage: disappointing and hurtful.
Give me a break…please! He has no conscience whatsoever, so he has no capacity to feel hurt or disappointment.

Maryaha . . . . If he did have the “capacity to feel hurt or disappointment,” he would not be peddling the awful garbage that he has been selling for quite some time now. You are not going to “feel hurt” over the one, and not the other.

Jay-Z sings lyrics to songs that are vulgar and uses filthy dirty language to get his point across and he is saying that President Trump’s comments are vulgar. Wow. You cannot make this stuff up. Perfect example of someone pointing a finger at another person and forgets that there are THREE fingers pointing back at them. In the world of liberalism, my comments are consider racist. In my world, it is called pointing out the hypocrisy of liberalism while using decent language and words to call that hypocrisy to their attention.

Ah, such a “silver-tongued devil”. Aren’t lyrics “beautiful”? This is all part of the mind control too. Designed dissonance. He is on the cutting edge of the “dumbing down”. Let’s reduce language to grunts and groans.
I suppose if you put a monkey in people clothes you still get a monkey in a man-suit, no matter how much bling you hang on it.

I think he’d show up on the far left of the bell on Dr. E’s IQ’s of the World chart.

No way that ghetto boy has to be accussed of harassment, wise boy he knows the trick, pimps his wife!

Yeah y’all. He send his baby-momma to da bank while goes ta get whiskey. Somebody should give him some Tide Pods in his gumbo. 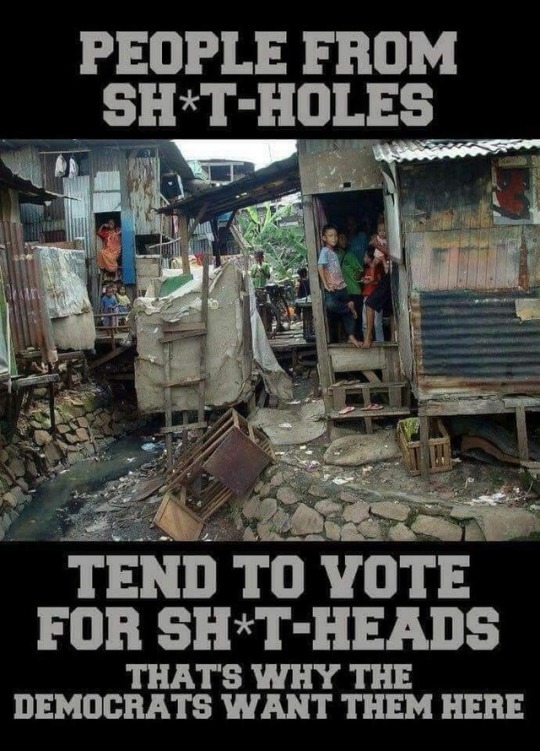 lophatt . . . . When they say a picture is worth a thousand words . . . in this case that really is true. Just look at the sewer that runs between the houses. This just makes me sick. How can you ever expect people who come from this kind of existence to just all of a sudden blend in with American culture? For one thing, I would sorely expect that these people know nothing of the rules of hygiene. That is not a criticism, it is but a stated fact. We already know that among recent immigrants, they… Read more »

When I worked for the government I sometimes had to travel for training, etc.. Once I was in San Diego and the immigration people (La Migra) gave us a slide presentation. They have a lot of trouble with diseases like tuberculosis, etc..
They go around to the migrant camps but the people run away from them when all they are trying to do is test them to see if they need treatment. Of course they end up spreading it to the whole area.
That’s one reason Trump’s wall makes sense. You can’t be just “a little infected”. 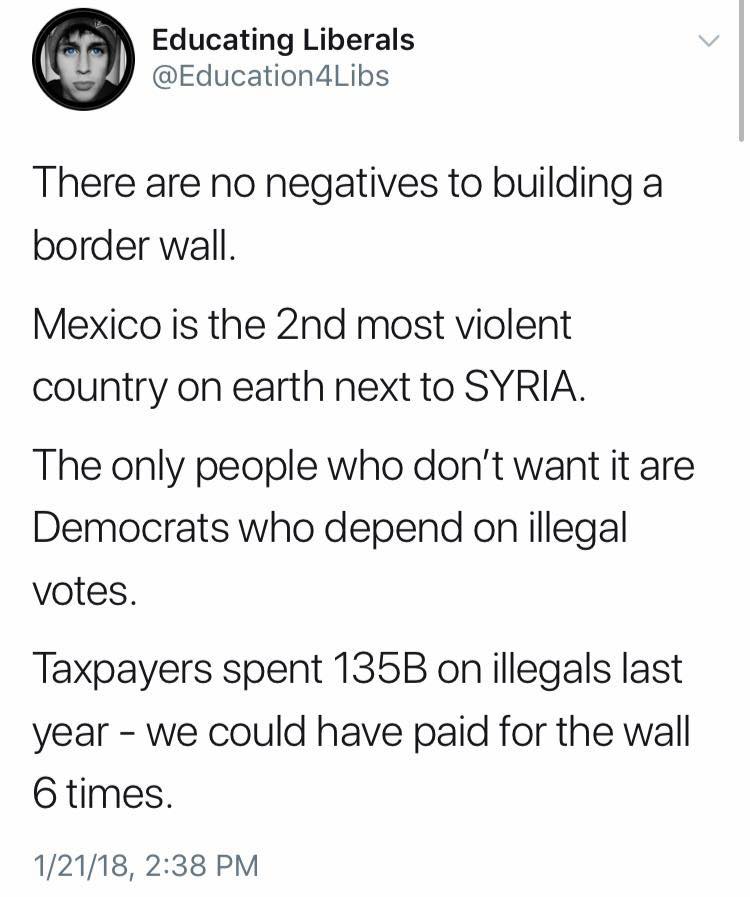 lophatt . . . . after reading that post, no one can argue with the idea of building The Wall.

Jay-Z is more likely to put a knife in some one. https://washington.cbslocal.com/2012/09/19/jay-zs-past-includes-being-crack-dealer-stabbing-record-producer/

The simple fact that they push this “cultural” icon speaks volumes. Surely no one thinks that people fell in love with their garbage. This is as manufactured as Little Barry Hussein.

Screw Jay Z and everything he stands for. If money is so unimportant and insures no happiness, then why did he sell his soul for millions of dollars? He is a another Rapper who misleads, confuses, and mentally destroys many young minds with their negative and garbage lyrics talking about Politics and hurting peoples feelings. These rappers are leading youths down the path of hell and everybody is OK with it because %1 of the population profit from it. What an Insane world we live in. Jay Z is the worst

Lavelle . . . . God Bless you for speaking the truth about Jay Z. There is no doubt that he is one “who misleads, confuses, and mentally destroys many young minds with their negative and garbage lyrics talking about Politics and hurting peoples feelings.” That statement is spot on! The people who do this are agent’s of Satan. In return for their devotion to the Father of Lies, he has provided them with success, fame, wealth, all the things that so many people yearn to attain, if they do not know where true happiness comes from.]

Harvey and JZ, both female to male transgendered individuals in my opinion.

I know I get everything I need to know from this assortment of actors, comedians and Rappers. Virtual Marcus Aurealus’ and with the wisdom of countless sages. Maybe, just maybe, only fools listen to other fools and spread their foolishness like a disease.

Thanks Auntie Lulu; and your comments are right On about selling out to the father of lies for fame and fortune.Indeed, may people do not know where true Happiness comes from. Good Stuff Auntie!!

You have to feel sorry for the guy. I mean, he is sensitive, and the president’s words probably hurt his heart and cut his soul to the quick. Oh, I meant, if his soul didn’t belong to his father, Satan. https://ninetymilesfromtyranny.blogspot.com/2018/01/imagine-that-this-thug-and-communist.html

Aw yes, the holier than thou JayZ the guy that shot his brother, sold crack, beat up on people and a bunch of other things.
Should we even take him seriously? I could never stand the man.