Trans ideology has allowed a male rapist into a female prison. It has allowed males to compete in female sports. It has forced women to accept men into showers and locker rooms. It has allowed a man to be named Glamour Magazine’s Woman of the Year. Women who object are vilified and harassed on social media; they lose friends, social standing, and even jobs.

The transgender fiction is too much even for some Leftists.

Last November, a self-described Progressive playwright said she was blacklisted for dissenting from the transgender groupthink.

The latest inmate to break free from the Left’s thought-gulag is self-described radical feminist Julia Beck.

Austin Ruse reports for Crisis Magazine, Feb. 1, 2019, that Julia Beck, a lesbian and a self-confessed “radical feminist”, told her story on a recent Heritage Foundation panel, convened to encourage opposition to a Congressional bill called the Equality Act.

HR 2282, The Equality Act, introduced by Rep. David Cicilline (D-RI) — who was the first openly “gay” mayor of a U.S. state capital — would enshrine the transgender ideology into American law under the legal concept of public accommodation, wherein the federal government will take away any and all women-only spaces in the country.

Julia Beck said she was booted from the Baltimore LGBTQ Commission because she referred to a male rapist, who claims to be female, as male. The authorities put the male rapist in a woman’s prison, where he proceeded to rape more women.

The logical question to ask the prison authorities and Baltimore’s LGBTQ Commission is this:

How can a man rape women unless he is male?

For correctly referring to the rapist as male, Beck was accused of “violence” and voted off the LGBTQ Commission. Leading the attack on Beck was the Commission chairman — a man who also claims to be female, and a lesbian.

During the hearing to kick Beck off the LGBTQ Commission:

To underscore her point, Beck points out that so-called “trans-women”, i.e., biological males, usually present themselves in the most exaggerated and even grotesque caricatures of women.

Beck was one of four radical feminists on the Heritage panel, all of whom have virtually nothing in common with conservatives other than opposition to the trans ideology.

(1) Jennifer Chavez, of the Women’s Liberation Front, told several stories of desperate mothers whose kids were hijacked into the trans-cult. A 14-year-old girl “spontaneously” decided she was male and, according to her mother, went from a “sweet loving girl to a foul-mouthed hateful pansexual male.” The girl ran away from home and moved to Oregon, where she was given a double mastectomy and a radical hysterectomy, even though she had been diagnosed previously with ADHD, depression, and anxiety. She is now living on the streets and planning a surgery that would take part of her arm in order to create a crude penis with a mechanism to fake an erection.

Chavez said much of this contagion is spread via YouTube and other social media sites by Jazz Jennings and someone named Riley J. Dennis, who is famous for saying it is bigotry for males to avoid sex with “trans-women” such as himself. Dennis, one of the sickest and most dangerous people on social media, has a huge YouTube following where he discusses all manner of vile things such as how to have sex with someone in various stages of “transitioning.” A short clip of Jazz Jennings was shown at Heritage in which he was celebrating his impending castration. It showed a “penis” cake that Jennings gleefully sliced to cheers from his family and friends.

(2) Kara Dansky, also of the Women’s Liberation Front, said that the issue is really about the intellectual bankruptcy of gender identity ideology and the importance of language. No one really knows what these words mean; all definitions of gender identity either reinforce sexist stereotypes or are completely tautological and rely on regressive sex-based stereotypes. Referring to men who identify as female because they see themselves as nurturing and compassionate and like to wear dresses, Dansky said this is insulting to women who worked hard to get into the workplace, dress the way we like, and that women are not defined by what we wear.

They have become so insane that they are now mentally and functionally crippled.

Did not know Cicilline was a homo. I wonder how many of his fellow Italians in Rhode Island actually voted for that guy. The perverts are taking over.

Cicilline’s wikipedia page references him under articles for both Jewish and LGBT, but not Italian, members of congress, in the first case because his mother is Jewish. He’d been the mayor of Providence, noted for its annual riverside bacchanalia called WaterFire, featuring a hundred or so huge floating bonfires and New Age music slithering from speakers all along the river downtown. I went about 15 years ago and it still gives me the creeps, more so than the dank jungles I’ve been in on three continents—more like some palpable evil out of Conrad’s Heart of Darkness that was transposed into… Read more »

Said another way, you’ve got yourself a “sh*t-eating congress critter”.

She is he; he is she, he she is IT. And he and he, John and Joe are the new parents – “ I have two daddys”. And she and she, Jill and Mary are the new parents – “I have two mommy’s” When? What are you? Not too far from now filling legal documents the (✔️) will not matter. The future of our country/society is being shaped before our very own eyes. John Lennon wrote the New World Order anthem: Imagine there’s no countries It isn’t hard to do Nothing to kill or die for And no religion, too… Read more »

Alma . . . Thank you for bringing to our attention John Lennon’s song. At the time it was written, most of us were not evolved enough to see the awful truth of the matter. There will be NO PEACE as long as we have those wealthy and power hungry individuals who wish to enslave the rest of us. It is quite evident in today’s world exactly what is going on–we have but to look around.

Auntie Lulu, the world he “Imagine” became his reality when he was dispatched Dec. 18, 1980.

Guy was a POS fraud.

Alma
Reply to  Jan in NH

Did you know President Richard M. Nixon wanted him out of our country?

put to death for the sake of humanity.
these people are human trash 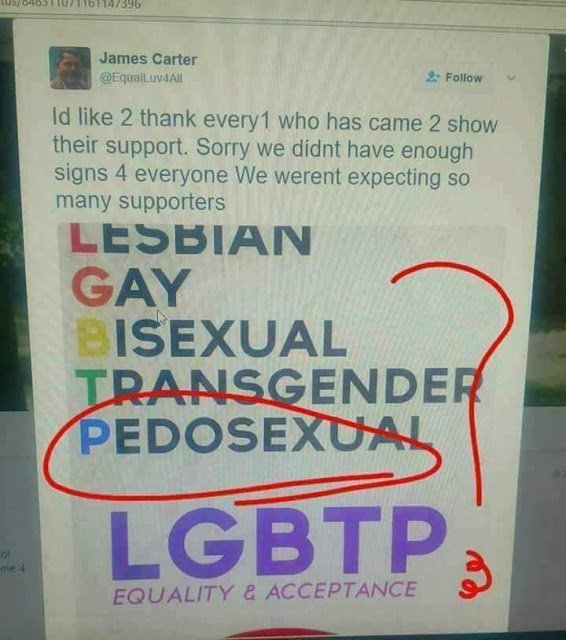 And we watch as the mentally unstable LGBTQRMNOP socialist-democrats eat their own. It’s getting fun. Bring out the popcorn.

Clearly I have lived too long. You can NOT EVEN IMAGINE the pure CRAP involved in this issue of “choosing” a sexual identity that is going on in my MIDDLE SCHOOL. I don’t care what the heck happens to these kids anymore. I can’t “save” my kids anymore from the myriad attacks of greater culture these days. It used to be “just” such things as illiteracy, child abuse, identifiable/measurable leaning disabilities, physically crippling conditions, and so on, that I had to deal with. But life is, sadly, so different for teachers now. I was hired to teach certain subjects, all… Read more »

QUESTION: Did the “woman” in the women’s prison commit the rapes with a penis? If so, where did the penis come from?
QUESTION: If gender has nothing to do with our bodies, then why do transgender people want to undergo hormone therapy and even surgery to change their bodies?