Using exit poll data by the National Election Pool, as reported by CNN, Pew Research Center determined that “The stark demographic and educational divisions that have come to define
American politics were clearly evident in voting preferences in the
2018 congressional elections.”

Reporting for Pew on November 8, 2018, Alec Tyson describes those divisions: 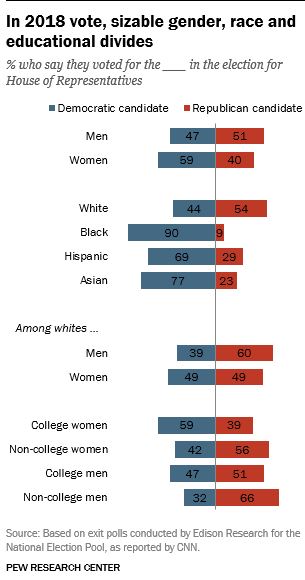 In a report on November 7, 2018, Pew Research found that “A preliminary analysis of the 2018 midterm elections finds considerable
continuity from 2014 and 2010 in the voting patterns of several key religious groups“:

Boy oh boy, are we ever screwed according to those results. :-/ A few things (per their results) would mean: __The masses’ “Cerebral Masses” are getting Worse/Dumber, not Better/Smarter. __College Edumacated = Commie Brainwashed = Vote Dem. __ALL “Minorities” are Traitors. = Vote Dem. (No #Blexit either.) __Too Many Women are still Suckers believing the “Serpent Party.” = Vote Dem. __Only Old-Timers & some Men have any Conservative Bones left in their bodies. The Younger Crowd is Totally Lost. When we Dinosaurs die off, it’s All Over for this Country+World. = They will all Vote Dem & its NWO. __Ecumenical/Liberal… Read more »

To make it worse, 50% of Whites are boomers which means they are dying.

Look, I don’t believe in anything, Brenda Snipe(r)s is a fraud as was the past director of Broward County, Olyphant, that is Debbie Wasserman Schultz territory. Brenda Snipe(r)s is a lying corrupt woman, why hasn’t she been kicked out of office already, oh yes, Debbie Wasserman Schultz’s County where everybody is corrupt, the Chief of Police a lying corrupt cop, so fear none, everything is taken care of. Once again South Florida continues to make the headlines, and why in the hurricane devastated areas where the hurricane hit, it all went well.

I hear you Alma. I’m amazed. There is a reason that the polls close on a certain time and date. How this woman continues to “find” Demonrat votes everywhere and merrily continues to count them, long after election time is a mystery. Trump promised to prosecute election fraud. Great. She’s Public Enemy No. 1. The course ordered her to declare the total number of ballots received and the total count and she refused to do it. All the other counties in Florida managed to do that. Why is she not under arrest? Today they are saying that “scores” of ballots… Read more »

Anyone notice Pew doesn’t tell us the total interviews in each sample thereby denying an accurate picture? Pew’s other surveys consistently fail to advise the total queried rendering their surveys problematic.
Absent the total queried, my thoughts drift to the old bookkeeping adage: “Figures can lie and liars can figure”.
On the other hand, the puzzle remains concerning the thought process of people submitting to a stranger’s inquires. Are they expressing their opinion truthfully or do they have a momentary need to feel important?
Nevertheless, Pew’s surveys are of interest with agenda pitched shrouded in fog.

No sympathy for the masses. When the glorious man made utopia goes up in smoke I will laugh my ass off. When they come and ask for help and supplies I will say…eat shit Bolshevik Rat.

Why do the Florida taxpayers continue to be subjected to so much shame, be it school shootings, voters fraud and corrupt politicians? and the millions in the State have to foot the bill to make it look that it is all fair -stop stealing my hard earn money in taxes to keep all the system corruptors working and getting paid, CLEAN HOUSE, we need it the upcoming governor De Santis is to work for WE THE PEOPLE and show us we elected him to make the system work for us and not for them. I hope De Santis does not… Read more »

How dare anyone question the results of polls. Thwey are alwasy spot on and 100% true. signed, Hillary Clinton.

That is a very revealing breakdown of demographics, Dr. Eowyn! Thank you for it.

Divide and Conquer, followed by mass murder, economic & societal collapse. That is the trademark of Socialism/Bolshevism/Communism/Liberalism/Jacobinism/Democracy etc

Find out about the Florida’s $800,000,000 embezzled taxpayer money by the unknown officials. Follow @roberthpreston on Twitter. I don’t use Twitter, except to mine info from 😉 like the Gov’t Oversight Committee ought to be doing. Or, FL Gov Rick Scott should hunt down Runcie et al.

None of this matters. Period. No one in my household will EVER answer a poll. This is intrusive. It also borders on negating the sanctity/privaccy of my VOTE…which I hold as SACRED &PRIVATE. Additionally, My husband and I are both PhD’s or equivalent. We are registered Democrats who left our party many years ago, even before Barack Insane Obama. We never bothered to reregister our party designation b/c, in the age of email and mass media, we like receiving the mass Democrtic messages to let us know “what they are up to” in real time. So, we get both the… Read more »