A 49-year-old woman was arrested in Saratoga Springs, NY, for strolling through a lumber store in the nude.
The UK’s Daily Mail reports, May 17, 2012, that last Tuesday, Barbara Lefleur shocked the customers at Curtis Lumber Store as she traipsed through the aisles stark naked, told an employee to “have a good day” and asked for the time.
A photo of the incident, obtained by TimesUnion.com, was shared on Facebook later in the day and instantly swept the web. 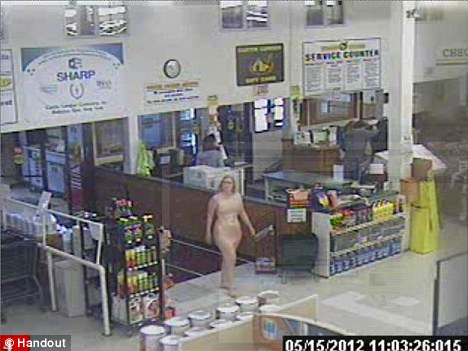 Police received a call after the naked woman was seen again at nearby Stewart’s Shop along Route 67, where she was approached by a manager who asked if she was aware she was naked. By the time the police arrived, she had put some clothes on.
LeFleur brushed off the incident, insisting it is her right to walk freely in the nude as a form of “self-expression.”
Saratoga County District Attorney James Murphy said LeFleur is charged with misdemeanor public lewdness and could face 90 days in jail. Murphy said in a statement: “While the defendant claimed she was merely expressing her freedom to be fully liberated by walking nude into Stewart’s and Curtis Lumber, this alleged conduct is actually a crime under the penal law.” He added: “Surprisingly, mental health found no psychiatric issues whatsoever.”
Lefleur is a massage therapist and singer-songwriter who is self-employed. According to her LinkedIn profile, she also claims to be a longtime content product manager at Delmar Cengage Learning, where she helps “shepherd projects through the production process.” She writes on her profile that her goal is “to enjoy life fully by maximizing my potential in all areas of interest and expertise.”
+++
Lefleur’s mistake was to roam naked in Saratoga Springs. If she were in Berserkley, California, no one would bat an eye.
Naked people were among those in 2007 who sat in trees to protest the cutting of a small grove of oak trees to make way for the earthquake retrofitting of a sports stadium at the University of California, Berkeley.
The World Naked Bike Ride in 2010 was held on June 19 in Berserkley.
Every year, Berserkley holds the Annual Nude and Breast Freedom Parade. You can see pics of very ugly naked people at the 9th Annual Parade here.
And then, of course, there’s Berserkley’s famous Naked Guy, aka Andrew Martinez.
Martinez began appearing naked in public in September 1992, his second year as an undergraduate at UC Berkeley. He led a campus “nude-in” to protest “social repression,” insisting that clothes were a tool for class and gender differentiation. Campus police first arrested him that fall for indecent exposure when he jogged naked near dormitories late on a Saturday night. But the county prosecutor refused to prosecute, concluding that nudity without lewd behavior was not illegal.
The university then banned nudity on campus. But, being feckless wimps, the university did not enforce its own policy. So The Naked Guy, which became Martinez’s official moniker, continued to stroll around campus naked, including sitting naked in lecture halls.

He dropped out of college but continued living in Berserkley and eventually was arrested for public nudity by the city police. He fought those charges and won. For many months, it was legal to walk around nude in Berserkley. That summer, I saw two women walking on Bancroft Avenue on the south side of the UC campus, all naked except for clogs. A man in his 60s was also seen leaving a coffee shop on Bancroft, all naked, except for a trail of toilet paper stuck to his behind.
There is nothing less sexy than the naked human body, in daylight, especially under the noon day sun.
After Martinez attended a City Council meeting naked, the city council finally adopted an anti-nudity ordinance in July 1993.
As the years went by, Martinez’s mental illness became more evident (as if it wasn’t evident before!). On January 10, 2006, he was arrested after a fight at a halfway house and charged with two counts of battery and one count of assault with a deadly weapon. He was placed in maximum-security custody in Santa Clara County Jail in San Jose, a city south of Berserkley.
On May 18, 2006, 33-year-old Martinez was found with a plastic bag cinched around his head. He was taken to Valley Medical Center, where he was pronounced dead of apparent suicide.
See also my post, “Being Left and Going Naked“!
~Eowyn

like I said-“trying to reason with liberals,is like trying to pick up a pile of dog shi! with a weed-eater!” nasty. Unsanitary. What in the world makes them think they should walk around like that?

How soon can Newt get his moon colony up and running? I don’t like it here any more. And I think, if you don’t wear a spacesuit up there, you’ll blow up or something.

Pretty soon your desire to run around naked will be labeled a “civil right”.

Thank you, Dr. Eowyn, for this interesting post. Such behavior is again, extreme love of self, narcissism, pushing nudity on all of us because they opine that they know better than us, that they believe their bodies are handsome and beautiful, notwithstanding the fact that no one wants to look at them because they don’t want to become ill. It is sheer selfishness and “look at me” kind of mentality. Even the “natural law” sets within us a disdain and sick feeling of this kind of behavior. Frankly, the natural law also prefers modesty, which promotes respect and comfort. These… Read more »

Grouchy, ditto on that!

What makes these people think we want to see their “stuff”? UGH!!!!!

Precisely. That just goes to show how narcissistic and grandiose they are!

Every so often I get the urge to…. you know….. dash around the house in the all together. It goes just fine until I pass a mirror and then….. the urge…. well….. not so much.
Did I say that out loud?
At least I never get that urge in Bed, Bath & Beyond.
Costco sure but never BB&B!

Just an observation. Silly me but……. she’s entering a store.
Where’s her wallet? Not even the pretense that she’s not there just for attention.

Yikes!!! I did sort of lob that one in there didn’t I GF? At least you didn’t say “Gucci bag”.

oh nos…you made my Sporran wither a bit 🙂

I think there should be standards for people going naked in public.
First of all, absolutely NO GUYS!
Secondly, they have to be at least as hot as Maria Sharapova.
😉
-Dave

Your comment shows you’ve completely missed the point of this post. Dave, you are desperately in need of a wife.

But who’s going to set the standard for hotness? The White House Hotness Czar? I see a problem with this.