Protestors soon to be unemployed: Super-cool robots are taking over jobs

Pretty soon the “Fight for $15” crowd will be fighting just to find a job.

Domino’s new trial pizza delivery robot in New Zealand is just under a metre (three foot) high and contains a heated compartment that can hold up to 10 pizzas. (AFP Photo/)

Via SF Gate: Domino’s announced last Friday it’s testing a pizza deliveryman robot in New Zealand with a four-wheeled, short and squat droid who looks like a cross between a Wall-E and an R2D2. At the same time, Carl’s Jr. CEO Andy Pudzer told Business Insider this week he wants to build a fully-automated restaurant.
What’s more, Google is in the news  for sending a letter to U.S. transportation officials saying it should be legal to market and sell self-driving cars if they can pass standardized federal safety tests. Once this all gets sorted out, Uber, Lyft and taxi car drivers will be out of jobs.
A robot is any machine capable of carrying out a complex series of actions and typically programmable by a computer—and we’re increasingly seeing these high-tech machines replacing jobs once performed by humans. At the airport ticket counter, at the grocery store checkout line and at the bridge tool booth, we’re less frequently looking a human in the eye when we hand over our money. Instead, we’re dealing with a computer.
At the annual meeting of the American Association for the Advancement of Science in Washington, D.C., in February, Professor Moshe Vardi said robots will take over most jobs in 30 years, the British Telegraph reported. “We are approaching a time when machines will be able to outperform humans at almost any task,” said Vardi, a professor in computational engineering at Rice University.
He added: “Robots are doing more and more jobs that people used to do. Pharmacists, prison guards, boning chicken, bartending, more and more jobs we’re able to mechanize them.”
The high-tech world is even finding ways to use computers to do jobs that seem as if they’d require a human mind. The LA Times uses what’s known as QuakeBot to quickly write and publish news about recent earthquakes.
Businesses are turning to robots because they can save money.  Carl’s Jr.’s Pudzer said he’s investing in the automated restaurants because minimum wages continue to go up across the country.
“With government driving up the cost of labor, it’s driving down the number of jobs,” he told Business Insider. “You’re going to see automation not just in airports and grocery stores, but in restaurants.”
But as technology advances and swallows up an increasing number of jobs, some question whether the bottom line should only be about money. What about the loss of jobs? And the overall loss of human connection? Research shows that people benefit from social interactions and can happen at the grocery store, at the bank, at the library when there’s an actual person behind the counter or at the cash register.
At the Advancement of Science conference Professor Vardi posted a profound question: “Does the technology we are developing ultimately benefit mankind?”
See the gallery of some super-high-tech robots replacing jobs at the SF Gate web site here.
DCG
Please follow and like us:

Replacing the lobots with robots.

When I was in college, my friend Sal thought robots (then assumed to be installed only in automobile plants, for the most part) would do no economic harm, given that repairmen (and programmers, it would turn out) would be needed to maintain and repair the robots. But I see the game going on now: Capitalism or socialism, we are living under an Oligarchy of Billionaires, with a complete eugenic and crony agenda and program to destroy the jobs. THE ENTIRE GAME, LIKE WALL STREET, IS LIKE A GIGANTIC CASINO! And we all know YOU CAN’T BEAT THE HOUSE! Let us… Read more »

As observed on South Park:
https://www.youtube.com/watch?v=qj6-S_b1L4s

Protestors soon to be unemployed: Super-cool robots are taking over jobs | kommonsentsjane

[…] Source: Protestors soon to be unemployed: Super-cool robots are taking over jobs […]

” The problem is THEY OWN THE “CASINO.” And we CANNOT beat the House.”
You,sir,sound like a QUITTER. Maybe YOU can’t beat he house,but I’m a Biker,and the Biker credo is “The best way to get something done is to tell a Biker it’s impossible. The best way to stop something from being done is to tell a Biker he HAS to do it.” With a defeatist attitude like that,America would never have happened.

You sir, need to do a little more research- read TRANCEformation of America by Cathy O Brien, and her contemporary, Bryce Taylor Thanks for the memories, these are biographies and the elite were in power from Project Paperclip, they infiltrated the whitehouse and every high level position, Hollywood for brainwashing, Disney, the music industry, in na very intimate and oersonal way. There have been no presidents in office that were not Part Of the Problem since the 60’s at the very least- Marilyn Monroe was the first Presidential Model, look up her horrifying MK Ultra life, JFK was brought up… Read more »

We see “automation” all around . . . here in Portland, OR when using the Multnomah Country Public Libraries–there are “self check-out stations” that work much like self check out at grocery stores. When I go over to my local library—almost everyone is using the self check-out stations. There are still the same number of “librarians” on duty . . . but they just sit on the other side of the kiosk and seemingly surf the library site. If someone steps up and needs their help, they immediately abort what they are doing and help them. Since all these librarians… Read more »

There are more nasty implications than simply theft of jobs… for one, every “Whistle-blower” in history has been human, that has morals (more or less) and an ability to see wrongdoing and report on it, or stop it outright. Robots are perfect idiots, they see only what they’re programmed to see and hear only what they’re programmed to hear, and don’t actually have functional brains to notice and report on/stop nefarious dealings. But that’s not all… lets not forget that being stupid (because there are no “intelligent” robots, actual intelligence is impossible to achieve in electronics, this fact seems to… Read more »

It’s only fitting that industrial products being sold as food are delivered or served by robots like the ones who make those products on assembly lines. In a review of fast food many years ago and regarding franchised pizza, the NY Post declared it would be more nutritious throwing away the pizza and eating the box. Carl’s Jr’s? With a name like that customers who patronize its “restaurants” deserve getting sick. Years ago when MacDonalds introduced McRibs I asked an acquaintance who owned a few MacDonalds what the McRibs tasted like, and he replied with a laugh that he had… Read more » 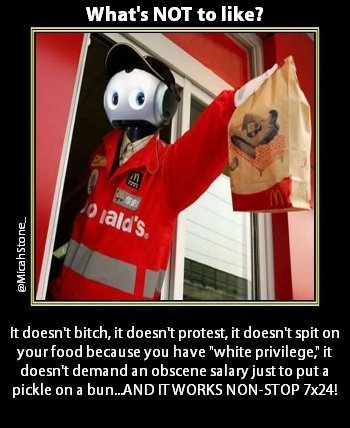