Problematic: 41% of college students believe hate speech should not be protected by the Constitution

Who gets to define what is “hate” speech?

From Daily Mail: Some 41 percent of college students say hate speech shouldn’t be protected under the First Amendment, according to a new survey.

Just 58 percent said that hate speech should be protected under the amendment, which guarantees American’s a right to freedom of speech, according to the survey of 4,407 students by the Miami-based Knight Foundation.

‘There is a new class of students on college campuses, increasingly varied in background and ideology, who are grappling with the reach and limits of free speech and what it means in the 21st century,’ said Sam Gill, Knight Foundation vice president for learning and communities.

‘Studying their views is key to understanding the impact that they may have on rights that are fundamental to our democracy,’ he added.

More than two-thirds (68 percent) of respondents said they felt that students can’t openly express their views due to a climate on campus that has people fearful of offending their peers. Just 31 percent disagreed that such a climate exists.

These opinions of young Americans on the matter of freedom of speech are problematic – if well intended, said Ken Paulson, the director of the Free Speech Center at Middle Tennessee State University. ‘Protecting hate speech is actually the reason we have a First Amendment,’ he told DailyMail.com. ‘We don’t need protection for freedom of speech if everyone agrees with one another. The protection we need is for speech that others may find offensive.’

The survey comes as more colleges are opting to cancel or not invite controversial speakers to their campuses due to student outrage.

For example, Middlebury College in Vermont apologized to students earlier this year after getting a negative reaction to inviting a conservative speaker to campus. College officials also promised to do more to prevent invitations to such speakers going forward.

‘The big difference between today and a decade ago is that the conservatives are the big driving force behind freedom of speech on campuses,’ Paulson said.

The report also found that more than half (53 percent) are in favor of protecting freedom of speech, while 46 percent say it’s important to ‘promote an inclusive and welcoming society.’

‘The Constitution was not designed to keep your feelings from being hurt,’ said Paulson, also the former editor-in-chief of USA Today. ‘It was designed so every American could say or do whatever they wanted and do so without being punished. To understand freedom of speech you have to understand that it’s the minority being protected against the majority and the government.’

41% of college students are low-information, brainwashed snowflakes who don’t know the U.S. Constitution.

Yep. I have no idea what they do in civics classes anymore. 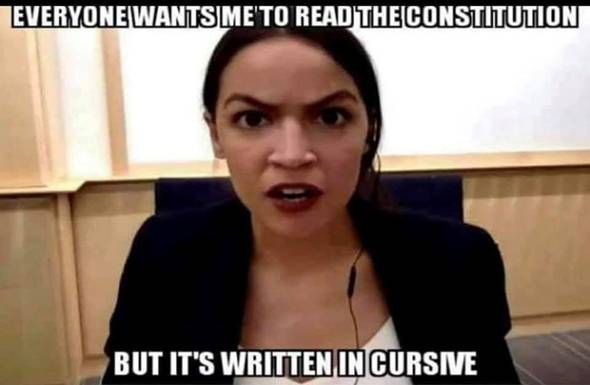 Their Common Core “education” is quite evident.

Obviously the product of careful brainwashing by their instructors. When I grew up everyone knew better. This is a right that brooks no allowances for “special circumstances”. The “cure” for speech we don’t like is MORE speech, not censorship.

You know?? I agree with this sentiment. If I want to call the neighbor a ‘bitch’, I have that right.
If she wants to call me an asshole, she has that right.

How about a “bitchy asshole?” LOL!

Only 41 percent of college women said that protecting free speech is more important than “inclusivity”. It never occurred to them that censoring unpopular opinions is almost the definition of exclusivity. If you tried to make this point to them I imagine they would say “whatever”. Maybe I was wrong about big pharma, perhaps their contribution could be to just keep these people sedated to minimize the damage they do. They literally do not know how to think. They know how to “grapple with the limits of free speech” though. Free speech means free speech. Nothing to grapple with

I hear ya!. “Inclusivity” is an invented concept. Just (((who’s))) invention is never discussed. The only time the current generation looks up from their “devices” is to look left and right to make sure they are conforming.

School never taught “Thinking 101”, it would be counter-productive to their evil plans. Logic is about as close as you can get.

Looks like the demonic freemasons are doing a great job at brainwashing the young.
I wonder, what about classifying any information about LGBT stuff as “hate speech”? I hate having to hear about it!

Common core, we owe to Jeffi Bush, what a creep! NWO