From Kansas City.com: A Missouri couple decided to turn their entire yard into a flower garden.  It turns out, that was against a city ordinance, which says half of residents’ yards must be grass turf.
But the wife is allergic to grass. Now a federal judge has ruled: tough.
So Janice and Carl Duffner are vowing to fight on.
Their city of St. Peters, near St. Louis, put the Duffners on notice that they must comply with the law. The Duffners said at the time they filed their civil rights action in late 2016 they were subject to penalties of $180,000 and 20 years in jail for non-compliance.
“If the city is permitted to impose draconian fines and imprisonment simply because a citizen chooses to cultivate on their own private property lawful, harmless plants of their own choosing instead of a potentially harmful plant of the government’s choosing, there is no longer any principled limit to the government’s control over either the property or the owners,” the Duffners’ complaint stated.
The Duffners bought their home in 2002 and began landscaping that included planting beds, two small ponds, pathways and seating areas. The St. Peters Board of Aldermen adopted the turf ordinance in 2008. At some point, an unidentified person complained to the city that the Duffners had no grass.
The Duffners asked for an exemption but were denied. Instead, the Board of Adjustment in 2014 told them to plant at least 5 percent of their property with grass. They refused.
In its response to the federal complaint, the city noted that the Duffners had first gone to circuit court in St. Charles County and had lost there because they had failed to exhaust their administrative remedies. After a mixed ruling from the Missouri Court of Appeals, the Duffners turned to federal court.
U.S. District Judge John A. Ross (appointed by Obama) last week ruled for the city, saying the Duffners “have failed to identify a fundamental right that is restricted by the Turf Grass Ordinance.” The judge said the Supreme Court has held that “aesthetic considerations constitute a legitimate government purpose.”
Ross also said the Duffners failed to demonstrate that the penalties for violating the turf ordinance are excessive and contrary to the Eighth Amendment.
The Duffners’ attorney, David Roland of the Freedom Center of Missouri, told the Riverfront Times that the couple will appeal.
“My estimation is that this is one of the most important property rights cases in the country right now,” he said. “We’re going to go all hands on deck.”
DCG

Judge is an Obama appointee, I take it?

Not sure, but I think you just insulted the Soviet Union. ?
I could see if this was a HOA, which are unbelievable in their own right, but a city wide rule. Wow.

Tar & feather that commie judge, then tar & feather the rest of the commies and their sympathizers. We are dangerously close to a breaking point and I will feel no sorrow for the federal parasites that happen to be the objects of the citizenry’s anger.

What the heck is wrong with the city of St. Peters? Since when did it become a crime in America NOT to have grass on your property? I hope these homeowners end up owning the city.

The village in which I live has the same stupid grass percentage regulation. I think part of the justification is to prevent people from paving over the entire place and parking cars on it. They want to keep a suburban feel/look which I understand. But, in this instance, we’re talking about flowers, not just dirt with no vegetation or excessive concrete/paving.

See picture I posted in comments. Their yard is rather beautiful, even with no grass.

But comrade, that is OUR job. It is right here on Page 15,324, right after what hand to hold your house key in when entering the home.

A grass lawn requires enormous quantities of water to maintain, which is really wasteful. Where aren’t environmentalists leaping to this couple’s defense?

Again, if the property is registered with any govt level, the legal owner is the govt, and you are just equity owner. Again, In the US June 5 1933, HJR 192 was passed after the US was bankrupted by the staged depression (by the global banksters), and the new collateral for owed $, became all property REGISTERED with govt, INCLUDING YOUR PROGENY and of course you, as most people don’t understand the Vital Statistics birth registration generating a birth certificate is (A) generated thus owned by the govt authority (B) not your birth being registered, but rather that of a… Read more »

Yes, a mortgage is a form of “bailment”.

Every time people elect liberals they get this result.

If she’s allergic to grass, try hemp instead. 😉
Are they in one of those commie inspired ‘planned communities’?
Those places are pretty bad. Though, I saw in my old ‘hood a cop posting a notice on a lady’s door (her lawn hadn’t been mowed and was about 12″ high). It’s a slippery slope, people say well that way the whole place won’t look junky. True, but that’s the road to hell, isn’t it?

“If she’s allergic to grass, try hemp instead.”
LOL – That was going to be my suggestion.
Maybe they can get some used AstroTurf from a demolished football stadium.
The way the NFL is going, there might be a pretty good supply of it in the near future.

People haven’t even begun to come to grips with what this “globalization” scheme looks like. The EU has teams of rule makers working day and night regulating every little aspect of daily life. There are no choices whatsoever.
I know I don’t want to live like that.

Lophatt, they’ve got them in boroughs around the US already too as you know. They’re called ‘code enforcement officers’. They also pay off garbage truck drivers to see if anyone leaves out water heater boxes in their trash- if they do they get a ‘visit’ and have to pay money- just to install a water heater IN THEIR OWN HOME! Oh, but it’s a FREE country, ha ha ha!! That always makes me laugh.

Oh we have them here too. I could tell you some stories. The latest one is that they are putting up traffic circles all over the place. They are ridiculous and unnecessary but they get federal dollars for building them. That’s another Agenda 21 item. They also make the streets narrower and put in bike/electric cart lanes.

These electric cars are very unhealthy, the EMR they emit is pretty bad. Then add cellphone radiation and 5G to the mix- it’s cancer city!

Yep, but its in “The Plan”. You wouldn’t want to argue with The Plan, WOULD YOU?

It’s as free a Country as we choose to make it,but we each have to be extremely wealthy to fight TPTB to MAKE it free…….

Just make sure the astro turf is hypoallergenic! 😉 Some place I drive past in their front yard they actually have astroturf covering some of their lawn! It looks horrible! Maybe these people should do that. 🙂

How ’bout a “bubble boy” suit? I was on an airplane on a cross-country flight and they announced “no peanuts” because one of the passengers had a “severe allergy” to them. I couldn’t help but think, if I had a severe allergy to something would I expect 200 other people to accommodate it? Just asking.

Ask if they have an Epipen. If the person is that allergic, wow. Many times they’re allergic to soy too and it cross contaminates somehow.
But how do they deal with just going to the grocery store? People go there and eat food out of the packages all the time.

I am sympathetic, but it just struck me as one of the strangest announcements I’ve ever heard. I think it goes with the concept of having to accommodate EVERYTHING. The world doesn’t work that way. Some people with issues have to figure out how to deal with those on their own.

And they touch everything, including grocery carts & baskets. It’s a germ fest…

Commie-lib goobermints do not like the concept of ‘private property,’ as it tends to fly in the face of their precious collectivist/globalist leanings.
Sad to say, but that is the Amerika we live in today.

Truth be known, that is WHY they don’t like private property. They are control freaks and want no impediments to their ability to tell everyone what to do. It isn’t enough to have you plow your field, they want to own the field so they can tell you which hand to use on the plow.

Sounds like their yard is very nice, ponds, flowers, paths. Most likely nicer than most yards. Are they registered as Republicans?
I would take lots of pictures and neighbor’s opinions and present them at the next city meeting and take lots of people with me. Stand up and push back.

It does look pretty: 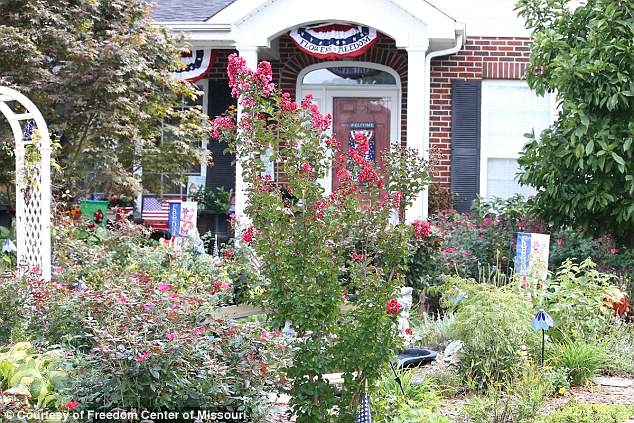 Yes, but they want to ensure that you understand you have no authority to make decisions. Those are done by the “Central Committee”. They have “experts” to do these things. All must be “homogenous”.

As far as I’m concerned, we are indeed already the Soviet Union. The police state is here. Things like traffic stops are nothing more than means to ensure we are compliant slaves, all while the Court system ensures that the Bill of Rights is a Bill of Lies. They don’t follow them. But we must obey. There is time coming soon when we will be asked to obey, and will comply, only to realize we are being boarded onto trains. I think we all know what will lie at the end. THEN we will all wish we had gone down… Read more »

What kind of a judge and jury would condemn a person to prison for a non crime? They committed no crime against society nor did any damage.
I think their yard looks lovely. Very Peaceful.

It’s as Gitardood has said. We have only privileges since they have essentially made us their slaves. So of course they ignore the laws. The US does not exist as we sheeple know it. That is the means by which we are blinded to obedience, sure someone somewhen will change it.
When in fact such people never get the chance, or die, or are crushed fighting a system of extraordinary power and scope.

What’s needed is what I call “The Italian Method”. They have had 60+ government since WWII. Instead of opposing them, head on, they smile, nod enthusiastically, then go right back to doing what they were before the interruption happened.
If forced to work, one can take great satisfaction in ensuring that the product is unsatisfactory in every way. If the authority turns his back, steal his wallet. If he goes to the toilet, lock him in from the outside.
When people become “cats” they are difficult to herd.

Say, make’m happy, plant GRASS, the real thing, hoards will parade in front of the property!!!

If they’re gonna be imprisoned for 20+ years at least make it for something REAL! Real GRASS!!! Not some stupid law that was never stated to be RETROACTIVE. Yes, I noticed the dates in the column, of the first planting and the new law, since when do they have purview over existing situations, unless the law is worded to make it retroactive? Pursue a “LIFE, liberty and pursuit of happiness” defense – if this lady is exposed every week when her husband is forced to mow the stupid crud, she could be so sensitized to her allergies that she could… Read more »

The city council and corrupt judge need to be smacked with the common sense stick. Stay the F off of my property, I will do what I please with it.