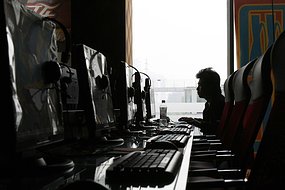 We’ve been warned about this for some months now, but it appears that the reality of Cyber War has arrived.
Seven months ago, on April 8, 2010, 15% of the world’s Internet activity somehow was re-routed to Chinese servers, including data from Pentagon and NASA. But we’re only just being told about this.
As reported by ABC’s Lisa Millar on November 18, 2010:

The United States has revealed the details of a startling breakdown in cyber security in April, when 15 per cent of the world’s internet traffic was diverted through China. Experts describe it as one of the biggest redirections of internet data they have ever seen.

For 18 minutes on April 8, emails and internet material sent from the Pentagon and NASA were re-routed via Chinese servers.
A US government report blames China Telecom, but does not say why it might have happened or whether it was done intentionally. But experts say it is a sign of the security risks ahead.
The Heritage Foundation’s Dean Cheng, who specialises in Chinese political and security affairs, says a lot of data may have been accessed by China. “There are instances where situations are not necessarily the deliberate result of government decisions, but that doesn’t make them an accident,” he said. “Particularly when you are talking about 15 per cent of the global internet traffic. If it had been going on for a few minutes, that would be one thing as servers simply got overwhelmed. That it went on for so long would suggest that that’s a lot of data that could be scooped up.” Mr Cheng is convinced a lot of that data has now been archived in China and is slowly being studied. He says even the encrypted material would eventually be broken down.
Dale Meyerrose, a former chief information officer for the director of national intelligence, says this is a serious threat. “What we’re seeing here is a technique that may have in fact … have been a cover for something else,” he said. “In my 35 years of dealing with this, there’s an intended consequence and a series of unintended consequences and I think they always play out in these sorts of things.”
Mr Cheng says it is not just a US problem. “It’s not simply American information that has been made vulnerable, but that of our allies, including Australia.”
China has denied it hijacked the internet but the incident has added to global concerns about cyber security. US defence secretary Robert Gates this week described potential attacks as a huge future threat and a considerable current threat.

I don’t mean to be alarmist, but this shocking lapse in cyber-security — together with rising trade and currency tensions with China, as well as speculations that the so-called “contrail” seen off the coast of Los Angeles on November 8 was actually an intercontinental ballistic missile fired from a Chinese submarine — sure makes one wonder if the United States is in an undeclared war with the People’s Republic.
~Eowyn

About 1968 or so, I had an extremely intelligent friend who was one of the engineers who developed the IBM 1020 and 1040 mainframe computers. He asked me as an investor if I knew what the most valuable asset would be in the future, and after a bit of thought I replied that I wasn’t sure. He immediately said “Information. Think about it: if you had enough of the right kind of information you could act ahead of others, and greatly increase your chances for success. Information of all kinds will be the best asset. Period.” Over the years since… Read more »

Don’t get me wrong, I know this his possible and probable, however, the government uses so many false flags, I just don’t know what to believe anymore. Propaganda…is this for real or meant to justify another possible war, invasion or what? I got it, if it is real, let’s sanction them quit trade with them and bring all our American businesses home. We can do away with the Federal Reserve and quit the pork barrel spending, cut government, cut entitlements to the lazy (there will be more companies back in America so there will be work), cut taxes to small… Read more »

think about it if you where in competition with the U.S. either militarily or economically what better opportunity is there than right now with the incompetent Obamba administration.. China could tell Obamba they did this on purpose and what are you going to do about it? Go home and cry to Michelle. Our enemies must be laughing with delight over the ineptness of Obama.

Great, so the Chicoms are reading our mail. Can’t say I’m exactly surprised.
This country is going to go Tango Uniform, and it’s own stupidity is what will ultimately kill it.
-Dave