Would this bust be happening under President Hillary Clinton?

The following news release from DHS seems to indicate a new determination in the law enforcement community to rescue this country from the brink of ruin.

RICHLAND, Wash. – A multiagency law enforcement operation in Washington’s tri-cities area targeting individuals intending to sexually exploit children resulted in the arrest of 26 suspects, including five individuals with access to children at risk of being abused.
The operation, which took place July 5-10, was the result of a probe by the Washington State Patrol’s (WSP) Missing and Exploited Children Task Force (MECTF) including U.S. Immigration and Customs Enforcement (ICE) Homeland Security Investigations (HSI).

“The number of predators interested in sexual contact with minors is overwhelming and made clear by these targeted operations,” said Brad Bench, special agent in charge of HSI Seattle. “Interagency cooperation is paramount in combatting this crime. We work tirelessly with our partners to protect our youth from these perpetrators.”

Undercover agents communicated online with individuals interested in sexually abusing children through various websites. The agents received hundreds of responses from would be perpetrators who agreed to meet with undercover detectives posing as children in order to engage in sexual activity…
Read more: https://www.ice.gov/news/releases/26-arrested-southeastern-washington-child-predator-sting

Considering Hillary and Bill Clinton’s connections with the “Lolita Express” it doesn’t seem likely that pedophile rings would be a priority if she were in office.

Wow! Great news that this is now being taken seriously. I have to wonder if this isn’t meant also to serve a warning to the subhuman scum involved in the Pizzagate scandal.
I don’t think this is the first warning shot to Podesta, et al. And I love that the Trump Administration appears to be working on this problem. Pedophilia and Abortion are my two #1 Hot Button topics, and there is NOTHING ELSE I would more like to see stopped!
~ D-FensDogG
(link:] Ferret-Faced Fascist Friends

Yeah, I think Trump’s little dig on the social media at “Skippy” the other day was to let him know he’s in his sights. The idea of the release of emails was to show just how infected this disgusting mess is.

There have been many other mass arrests of pedophiles across the U.S. since Trump became President.
Not discounting these busts, but I sure hope the DOJ eventually works up from arresting these little rats to tackling the big rats of Pizzagate in D.C.

Dr. Eowyn, I suspect that we don’t know the half of what is going on behind the scenes with the Trump justice dept. and what good things it is doing. We see a lot of the things that the media spreads every day about the DOJ, and are tempted to forget that they are a huge department, and can focus on dozens, if not hundreds of different investigations independently at the same time, without a problem. So let us hope that this is only the beginning of bringing some of these extreme scum to justice. And that the Judges see… Read more »

Happen under Hillary? In a word: No.

Skippy likes ’em young, so they can’t fight back!

These are low level street type arrests, as far as i am concerned it is total distraction from the CIA-MANAGED pedophilia ring in WASHINGTON DC which includes OBAMA, CLINTONS, PODESTA BROS CELEBRITIES, MILITARY-the SATANIST CHIL RAPIST/TERRORIST MICHAEL AQUINO

That’s what concerns me, too. But there is the technique of busting low level types, then making deals with them to give up people at higher levels, taking it up as high as possible. Just hoping and praying.

Yes, well that’s the point. These creatures gravitate to the “top” where they can share all sorts of sordid activities and never have to worry about prosecution. They all have the goods on each other.
If the Eaters get riled enough they’ll throw them a bone. It won’t be a Skippy bone. It’ll be some low-level, non-Kool Kid. If he gets mouthy, he’ll have an “accident” or get “depressed”.

N.B. also, that it was Pres. George H.W. Bush who gave Russian President Gorbachev free office space at the Presidio when he was Prez.

Hillary Clinton has more than proved herself to be infested with demons and to have a hatred for members of her own gender: She defended two Arkansas rapists early in her career, destroying evidence and laughing at the 12-year-old victim. I have heard credible news that she gave the order to incinerate the victims at Waco. She most definitely has enabled her husband in his rapes of several women, and she has intimidated and menaced his victims. So if she had been elected President, none of the arrests of these pedophiles would be happening. For whatever his personal flaws, I… Read more »

Trump is under tbe control of Chabad Lubavitch-via Jared Kushner 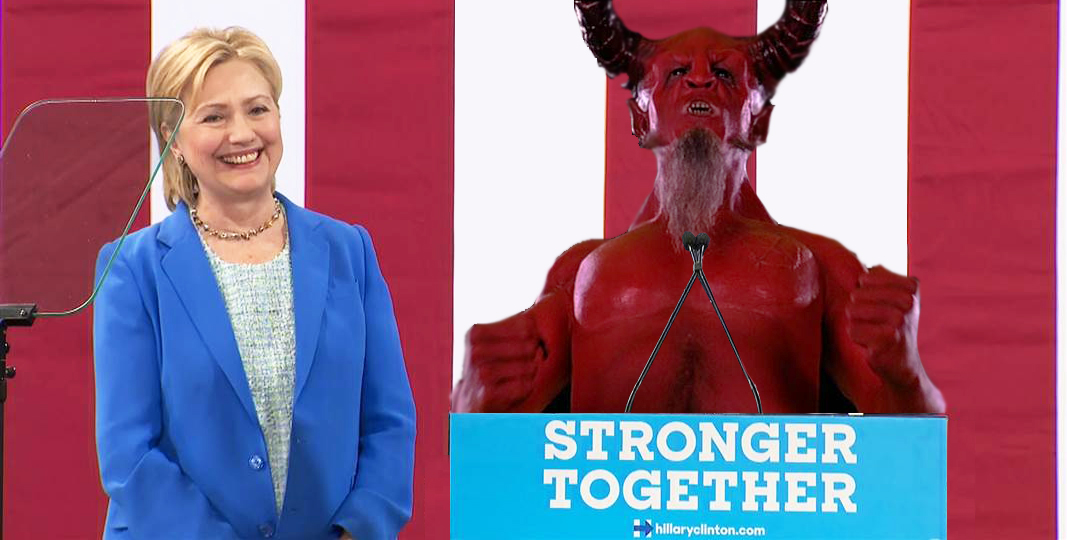 I like what is being done in this area, but Trump himself has flown on lolita express and is friends with Epstein. Trump has been sued in the past by women alleging similar conduct as those who accused Epstein. Also note the royal family in the mix. On that note, I don’t think this is going to go anywhere near far enough, but I’d like to be surprised.