Via The Daily Mail: Parents of fourth-graders at an Oregon elementary school were ‘furious’ to discover that their children – some as young as nine – had read an explicit sex education book featuring cartoons of sex acts and masturbation, Fox 12 Oregon reported Thursday.
In a letter to parents, Hudson Park Elementary School admitted that copies of ‘It’s Perfectly Normal,’ a guide to sexual health aimed at children ten and up, were passed around to students. It added that the book, which is about ‘changing bodies, growing up, sex, and sexual health,’ was actually intended for the school’s sixth-graders.
‘Inappropriate human development and sexuality books were disseminated to students who had library,’ the letter read. ‘Procedures have been put into place to make sure this doesn’t happen again. All questionable books have been pulled from library shelves.’

The school’s principal, Heidi Blakely, also apologized, Fox reported. The book is aimed at children aged 10 and up, and features cartoon depictions of male and female teens and adults. Acts featured in the drawings include male and female masturbation, and sex. It also discusses subjects such as homosexuality, puberty and menstruation. It is on the state’s list of approved books, the school said.
The school added that the incident was an ‘honest mistake,’ and that the book had originally been read by sixth graders who had left copies out, leading to the fourth graders finding and reading them.
However, some parents who did not want to be named to protect their kids told Fox 12 that the school’s librarian showed the children the books directly and encouraged them to take it home. They were angry that the book was allowed in the library, especially as they had not been warned.
The school told Fox 12 that the librarian had been disciplined and an investigation was ongoing, but that they did not want to say anything else as it was ‘a personnel issue.’
In the letter to parents it also said that policies regarding which books were allowed in the library were being discussed, and the school will notify parents ahead of sex education classes so their children can opt out if they are uncomfortable.
The American Library Association placed ‘It’s Perfectly Normal’ at number 12 on its list of the Top 100 Banned/Challenged Books, 2000-2009.
DCG
Please follow and like us:

And when was it that parents surrendered teaching their kids the rights of passage”? Who assigned our schools that obligation and why?
I’m so glad my kids are long out of the system – I’d be arrested. 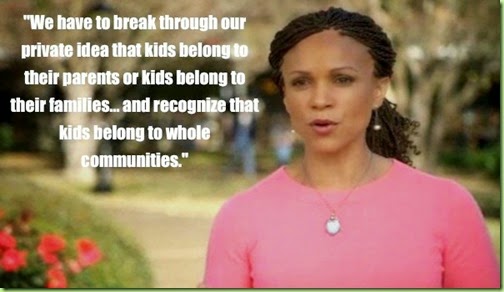 Lemme guess…she has no kids, right?

Two kids… but probably in no danger of mindless warped public school bullcrap like she advocates.

I should have guessed… I’ll bet they’re in private school, too. I just wonder if they’re spoiled little gimme-dats that want for nothing but need a good slap.

Well, Melissa, consider that many, like me, understand that we are IN the world, but NOT OF THE WORLD. I am “OF” God, from my conception, and, indeed, before THAT even, God KNEW ME. NEITHER YOU NOR ANY COMMUNITY “OWN ME” NOR MY KIDS. So, just “bug off” with this “community ownership crap.”

An apology by the librarian is to put it in one word . . . “lame.” She should be given her walking papers. It is outrageous that this particular book, since it is on the list of banned, or objectionable books would find its way into this school’s library in the first place. As an Oregonian, the thought is being reinforced that our patch of ground is fast becoming the weed patch of the nation! It’s time to get out the old herbicidal spray and clean up this nasty overgrown weed patch.

When I was in school,it was a “given” that before a book was made available it was read by at LEAST the Librarian,usually by a couple of teachers too,and if there was any doubt,it was brought up at the next PTA meeting for discussion. But THAT was back in the early/mid 60’s,when America still had VALUES.

Apology? The damage is done! NINE YEAR OLD!!!!!!!!???????? That’s the age where boys are still playing ball and playing with trucks, girls playing with dolls. These public schools are forcing perversion down our kids throats!!! Kids MUST have normal childhood stages and not forced to skirt around those stages.

They want our kids to mimic mohammad’s wife who, at the ripe old age of NINE (9), was RAPED! Sick bastards!

But liberals feel kids must be messed-up and unable to function without a therapist holding their hand (just like them) for us to achieve their utopia of everyone being interdependent and equal (in misery, of course, ruled over by them who feel good controlling everyone for once in their lives… just ask Joe Stalin and George Orwell). (Sarc.) Those children are not yours, they are children of the world and raised by the State. Do what BMM (Big Mother Marx) tells you, or I will tell BDM what you said when he gets home. Actually, he knows what you are thinking, so I don’t have to tell him what you say.

Yeah, what could be wrong with elementary kids getting this in school…

This book was published and hyped by Planned Parenthood. This is what you get with GOVERNMENT schools. N.B. how they did it: They “made the mistake” FIRST. While he was still Mayor of New York, Michael R. Bloomberg directed that contraceptives be distributed in New York City “public” schools. When parents objected, he then said they could “opt out.” But the damage was done by his stealth move. The same has happened here. This is how these saboteurs work. The sex-ed pushers came out of the woodwork in the late 60s and early 70s. They gained the ear of the… Read more »

If anything,THIS is good reason to vote for Trump. He wants schools to be locally run, just as they should be, and not from some dhmmi-wit in DC; .

“I am not holding my breath on Donald Trump here, who has said “Planned Parenthood has done wonderful things.” Most of us are guilty of speaking in terms that are largely inaccurate,but may be true in a specific incident,so I’m taking his comment as that sort of situation. I don’t doubt that even PP has done some good things;I’m also sure that an overwhelming majority of their work is horribly wrong. I find it very strange to say,but I believe it’s primarily true,that Trump has a very strong sense of “Right and Wrong” regarding what’s best for America–but what’s right… Read more »

You know what would be perfectly normal? To dump this atheistic left wing sex ed mumbo jumbo in the dust bin of history. It’s all about controlling your kids. The big brother state wants to program them to see good as bad and bad as good. Teaching about the sacredness of sexuality should be up to the parents and churches, not an educational system heavily influenced by a materialistic culture of death and depraved Hollywood values.

Yup, it’s the same crowd pushing polyamory and open marriages– destroy families and pair-bonding, and all you’ve got left is Statism (which the left/liberal proggies happily provide with a big helping of Free Stuff).

“Teaching…should be up top the parents and churches….” Ah….but dear Rocky—THAT horse left the barn when the Supreme Court ruled that “love is love,” and can not be denied b/c it is a “Civil Right.” YOU will NEVER EVER EVER again be the perveyor of sex education to your children, grandchildren, great-grandchildren…etc…etc….the STATE has already ruled and it will be THEY who monitor the sex education of your offspring in eternity in this country—and THROUGH it’s regulations on the public schools….as I”VE ALREADY, as a teacher, BEEN LECTURED/WARNED/ INSTRUCTED……, unless there is some big backlash…say…..75-100 years from now (about the… Read more »

Your kid is not going to wake up and have breakfast with Ruth Bader Ginsburg or any of the other lefty nuts. Parents, just do your job.

It’s amazing how some educators really see our children as their property upon whom they can foist their ultra-liberal ideas of human sexuality without parental approval. i experienced this over 25 years ago in a Christian school when a speaker from the local “aids project” was invited to speak to upper grade students. The bland non -descriptive letter sent home did not in any way spell out what was really to be presented but my antenna was up and I secured permission to visit the presentation. Ugh! the speaker was an activist homosexual aids victim who used much “street ”… Read more »

Oh, well, Sixth Graders… sexually-explicit material would’ve been okay for them then, I guess. 😉 (Jeez, “educators” today are idiots.)

ANOTHER reason to keep your children out of public school.

These are Frankfort School adherents.