Wish you were here? President spends $1.5m on his holiday in Hawaii… while the rest of America faces a bleak New Year

By David Gardner – Daily Mail – Dec 30, 2010
President Obama has splashed out more than $1.5million on a sunshine break in Hawaii while many Americans are still struggling in the aftermath of the economic meltdown. With Washington in a deep freeze, Mr Obama yesterday extended his stay on Oahu until next Monday.
But he is facing claims on the island that he could have been more frugal in his two-week getaway with wife Michelle and daughters Malia and Sasha at a luxury beachfront rental home in Kailua, an upscale resort about 12 miles from the capital, Honolulu.
According to the Hawaii Reporter, the bill for the trip included:

The White House would not comment on the cost of the stay. A spokesman said the president’s holiday expenses are in line with those of previous presidents. But the Hawaii Reporter claimed yesterday: ‘They could have chosen a less expensive and more secure place to stay such as a beachfront home on the Kaneohe Marine Corps Air Station – just a two-minute drive away from the Kailuana Place property where they are now. The president visits the military base daily to workout, bowl with his kids or enjoy the more private beach there. He also could have stayed at a home 15 minutes away on the beach fronting Bellows Air Force Base as President Bill Clinton did.’ 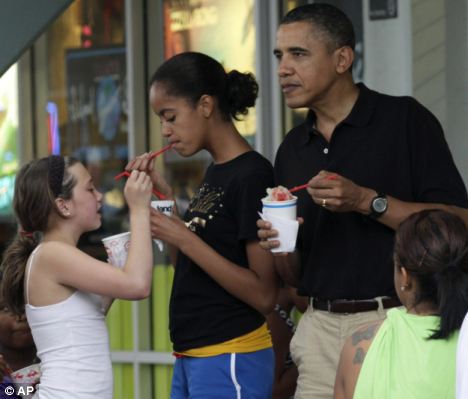 Chilled: The President enjoys an ice cream with his daughters as he relaxes on his Christmas holiday in Hawaii

The 7,000 square foot home where the president is vacationing has five bedrooms, a media room and a secluded lagoon-style pool with tropical waterfalls and a spa. The Obamas holidayed at the same spot last year, but rising fuel costs have pushed up the estimated travel costs and the president flew later than the rest of his family because of delayed votes in Washington, adding more to the escalating expenses.
The Honolulu Police Department said overtime for officers cost $250,000 last year, compared to $106,000 in 2008 before his inauguration. 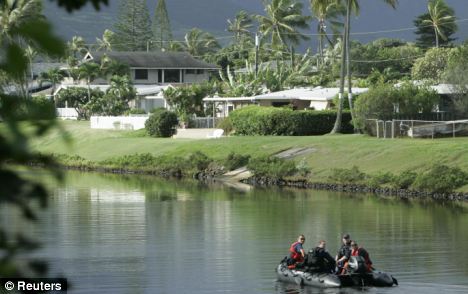 Tranquil: A Coast Guard patrol dingy rides up the canal near the house in Kailua where President Obama is staying

The President has no intention of going to a new location for his vacations. White House spokesman Bill Burton, who is with the president in Hawaii, said: ‘Like most Americans, the president knows what he likes in his own hometown. He’s been going to a lot of these places since he was a very young child and they hold an important place in his life.’
For his Hawaiian vacations, Mr Obama surrounds himself with a small circle of friends and family. His sister, Maya Soetoro-Ng, lives on Oahu with her family. Marty Nesbitt and Eric Whitaker, two of Obama’s friends from Chicago join him there for the holidays, as do childhood friends Mike Ramos and Bobby Titcomb.
But some local residents would like to see the president more engaged with the community. ‘Just because we’re in Hawaii and it’s paradise doesn’t mean it’s paradise for everyone,’ said Mike Irvine, who has lived in Honolulu since 1985. ‘Going to a black church, or maybe a homeless shelter would be a big deal.’

This entry was posted in Uncategorized and tagged Obama. Bookmark the permalink.

$1.5M? Heck, that’s a drop in the bucket compared to what he’s already spent in destroying our country. I’d be happy if he just stayed there PERMANENTLY and not do any more damage in DC…

Bill Burton and Robert Gibbs suffer from oral diarrhea with their spin on the extravagant and unnecessary spending of The First Family.
Which Obama is on his “hard- earned vacation”? Globe trotting entertainer or clueless, destructive legal scholar?

I do not begrudge POTUS taking a vacation,in my lifetime I cannot remember a POTUS ever taking as many vacations as Obama.I cannot comprehend how the taxpayers are on the hook for Michelle Antoinette”s Spanish junkard.Is it me, do the Obama’s think they are Kings and Queens? Michelle and Barry lavish themselves on $100 lb imported beef,as they say to us peasants let them eat spam or hash. They do not feel our pain as they ridicule the taxpayers.

To really make a comparision we need to compair how much George Bush spent on his vacations. Never did you hear about that and Bush is the one who got us in the financial mess in the first place. Why is it our business how much it cost him to vacation. People who have no life of their own will always talk about other peoples lives. If you don’t like the US move. There are pleanty of other countries to live in.

While we on the Fellowship are not Bush acolytes, just how much longer are you cerebrally- and morally-challenged Obamabots gonna keep blaming Bush? We’re 2 years into the Obama presidency. Give it a rest.
If you don’t “get” that it is obscene for a president and his family to live high on the hog when millions of Americans are unemployed — many for over a year — and 1 of every 7 Americans are on food stamps, then you’re the one who not only has no life but is also tone-deaf, hard-hearted, and plain unAmerican.

Blame Bush, how original! Just who was in charge of Congress & the Senate while FM2 were allowed to be out of control? I say we blame Bawney & Company.

DCG-it is amazing how many people don’t know the “Democrats” or aka “The New Socialist Democrat Party” have been in power since 06. We need a Cleaner for communists. They do not belong in the United States Government. I say ship them the hell out of here. We are knee deep in Aligators right now,Clinton’s are a good place to start. Ban Soros from the States,after he dies in a US prison for what he has done to us. Our days are probably numbered for being able to communicate. This is when you will see major s%^! hit the fan.… Read more »

So true Tina…I have conversations w/people who blame Bush & they don’t even know who Bawney & Pelosi are. We are screwed until voters are informed! Sad state our country is in…hopefully our new Congress can get us on the right track!