Every modern U.S. President has a doctrine that articulates his worldview and foreign policy.

As an example, reacting to America’s Vietnam War experience, the Nixon Doctrine was that the United States would no longer be the police for every and all in Asia. Henceforth, the countries of Asia-Pacific would be responsible for their own defense.

George W. Bush’s doctrine was that warfare is fundamentally altered by the Islamic terrorist attacks on the U. S. homeland on Sept. 11, 2001, and by the changed nature of America’s enemies from state actors to include non-government terrorist groups. As a result, America has the right to undertake preemptive attacks when and where we identify a terrorist threat. It is the Bush Doctrine that justifies our wars in Iraq and Afghanistan although neither government nor country had first attacked the United States.

Foreign affairs pundits have noted the peculiar lack of an Obama Doctrine although his first (and last) term is already drawing to a close.

Never fear! Fellowship of the Minds has discovered the secret Obama Doctrine!

The Obama Doctrine of the Irritating Bowing Syndrome 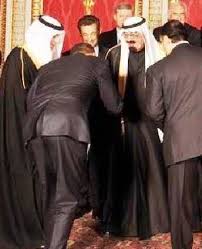 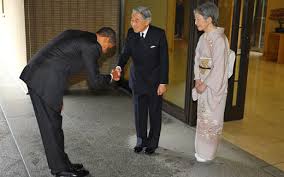 Dr. Eowyn, you are so creative and ingenious! The “bowing” policy is a wonderful way to describe the “king”.