Obama, Trojan Horse of the Left

In this op-ed, Lloyd Marcus advances the intriguing and persuasive thesis that the Left used a black man, Obama, as a Trojan Horse to advance their extremist ideological agenda.
Marcus, who identifies himself as a (black) Unhyphenated American, is an astonishingly multi-talented singer, songwriter, entertainer, author, artist, and TEA Party patriot. Check out his blog HERE.
H/t beloved fellow Tina.
~Eowyn

A Black Man. The Progressives’ Perfect Trojan Horse
By Lloyd Marcus – March 25 2010
As millions of my fellow Americans, I am outraged, devastated and extremely angry by the democrat’s unbelievable arrogance and disdain for We The People. Despite our screaming “no” from the rooftops, they forced Obamacare down our throats. Please forgive me for using the following crude saying, but it is very appropriate to describe what has happened. “Don’t urinate on me and tell me it’s raining.” Democrats say their mission is to give all Americans health care. The democrats are lying. Signing Obamacare into law against our will and the Constitution is tyranny and step one of their hideous goal of having as many Americans as possible dependent on government, thus controlling our lives and fulfilling Obama’s promise to fundamentally transform America.
I keep asking myself. How did our government move so far from the normal procedures of getting things done? Could a white president have so successfully pulled off shredding the Constitution to further his agenda? I think not.
Ironically, proving America is completely the opposite of the evil racist country they relentlessly accuse her of being, progressives used America’s goodness, guilt and sense of fair play against her. In their quest to destroy America as we know it, progressives borrowed a brilliant scheme from Greek mythology. They offered America a modern day Trojan Horse, a beautifully crafted golden shiny new black man as a presidential candidate. Democrat Joe Biden lorded Obama as the first clean and articulate African American candidate. Democrat Harry Reid said Obama only uses a black dialect when he wants.
White America relished the opportunity to vote for a black man naively believing they would never suffer the pain of being called racist again. Black Americans viewed casting their vote for Obama as the ultimate Affirmative Action for America’s sins of the past.
Then there were the entitlement loser voters who said, “I’m votin’ for the black dude who promises to take from those rich SOBs and give to me”.
Just as the deceived Trojans dragged the beautifully crafted Trojan Horse into Troy as a symbol of their victory, deceived Americans embraced the progressive’s young, handsome, articulate and so called moderate black presidential candidate as a symbol of their liberation from accusation of being a racist nation. Also like the Trojan Horse, Obama was filled with the enemy hiding inside.
Sunday, March 21, 2010, a secret door opened in Obama, the shiny golden black man. A raging army of democrats charged out. Without mercy, they began their vicious bloody slaughter of every value, freedom and institution we Americans hold dear; launching the end of America as we know it.
Wielding swords of votes reeking with the putrid odor of back door deals, the democrats
landed a severe death blow to America and individual rights by passing Obamacare.
The mainstream liberal media has been relentlessly badgering the Tea Party movement with accusations of racism. Because I am a black tea party patriot, I am bombarded with interviewers asking me the same veiled question.“Why are you siding with these white racists against America’s first African American president?” I defend my fellow patriots who are white stating, “These patriots do not give a hoot about Obama’s skin color. They simply love their country and oppose his radical agenda. Obama’s race is not an issue”.
Recently, I have come to believe that perhaps I am wrong about Obama’s race not being an issue. In reality, Obama’s presidency has everything to do with racism, but not from the Tea Party movement. Progressives and Obama have exploited his race from the rookie senator’s virtually unchallenged presidential campaign to his unprecedented bullying of America into Obamacare. Obama’s race trumped all normal media scrutiny of him as a presidential candidate and most recently even the Constitution of the United States. Obamacare forces all Americans to purchase health care which is clearly unconstitutional.
No white president could get away with boldly and arrogantly thwarting the will of the American people and ignoring laws. President Clinton tried universal health care. Bush tried social security reform. The American people said “no” to both president’s proposals and it was the end of it. So how can Obama get away with giving the American people the finger? The answer. He is black. 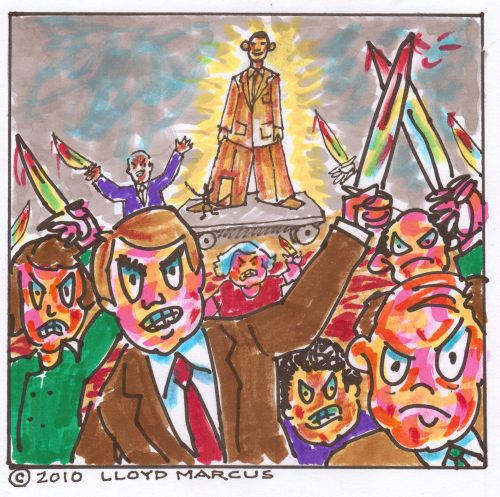 The mainstream liberal media ontinues to portray all who oppose Obama in any way as racist. Despite a list of failed policies, overreaches into the private sector, violations of the Constitution and planned destructive legislation too numerous to mention in this article, many Americans are still fearful of criticizing our first black president. Incredible.
My fellow Americans, you must not continue to allow yourselves to be “played” and intimidated by Obama’s race or the historical context of his presidency. If we are to save America, the greatest nation on the planet, Obama’s progressive agenda must be stopped.

Does the Trojan Horse have a drinking problem? One of the White House security cameras burned this image just after midnight, Jan 1st. Can’t see a face, so one can’t be positive…

Lloyd, it needed to be all laid out in plain English, no holding back. I feared this, saw this before he was elected. I underestimated the brazenness. I also underestimated the CONTINUING chorus running interference for this thrust every step of the way. Totally unmasked as far as I am concerned. Clearly an America, Freedom loving throng has arisen (expressed via Tea Party and other pens and microphones) in response, Thank God.
I’m grateful you are clear-sighted, eloquent and speaking the Truth.

> White America relished the opportunity to vote for a black man naively believing they would never suffer the pain of being called racist again.
What a racist notion to think someone voted for a black man for that reason. Does it not occur to the author that 69 million Americans voted for Obama because of the politics he promised and not because of the colour of his skin?
It goes to show that, contrary to what you may want to allude, an article isn’t racism-free by definition just because it was written by a black author.

Despite your disbelief’s… Obama’s race did play a part. It was the “Dream” of seeing an American of Negro descent elected to the highest office in the land, triggering the end of the false “Whitey holding us down” mentality that added to his ability to win.
Ironically Obama is not an American who happens to be Black or part black…..He is a “Black American”, There is a big difference. One is clearly American, the other is a citizen of another Nation whose borders have yet to be defined somewhere within the continental United states.