What better way to celebrate the day than a post on how much America’s former POTUS Barack Obama loves “pizzas” and “hotdogs”!

Note: According to Urban Dictionary,  The Daily Sheeple and others on the Alt-Media, “pizzas” and “hot dogs” are pedophiles’ code-words for, respectively, young girls and young boys. For other pedo code-words, see “Pizzagate: The Podesta ‘pizza’ emails“.

On October 19, 2012, WikiLeaks released a very curious email, one of WikiLeaks‘ Global Intelligence Files of over 5 million e-mails from the Texas-headquartered “global intelligence” company Stratfor. As WikiLeaks explains:

The e-mails date between July 2004 and late December 2011. They reveal the inner workings of a company that fronts as an intelligence publisher, but provides confidential intelligence services to large corporations, such as Bhopal’s Dow Chemical Co., Lockheed Martin, Northrop Grumman, Raytheon and government agencies, including the US Department of Homeland Security, the US Marines and the US Defence Intelligence Agency. The emails show Stratfor’s web of informers, pay-off structure, payment laundering techniques and psychological methods.

The email on May 14, 2009, was from Fred Burton, Stratfor’s vice president of intelligence, to Don R. Kuykendall, then President of Stratfor (Stratfor’s president is now Dave Sikora):

From: Fred Burton [mailto:burton@stratfor.com]
Sent: Thursday, May 14, 2009 2:39 PM
To: ‘Don Kuykendall’
Cc: ‘Aaric Eisenstein’; ‘Darryl O’Connor’; ‘Copeland Susan’
Subject: RE: Get ready for “Chicago Hot Dog Friday”
I think Obama spent about $65,000 of the tax-payers money flying in pizza/dogs from Chicago for a private party at the White House not long ago, assume we are using the same channels?

Below is a screenshot of the email:

Meanwhile, former VP Joe Biden stands in solidarity with Obama spending $65,000 of taxpayers’ dollars to fly in “pizzas” and “hotdogs” from Chicago.
For Obama’s 55th birthday last August, Biden sent him a childish friendship bracelet with beads spelling out “Joe” and “Barack”, and cute charms in the shape of a blue flower, smiley face, blue star and a slice of (pizza) pie (circled red). (Hollywood Reporter)

Here he is, copping a feel of a visibly-uncomfortable 13-year-old pizza, oops, I mean daughter, Maggie, of newly sworn-in Senator Christopher Coons (D-Delaware) in January 2015:

$65,000 for pizzas, yeah right. This can’t be real pizza he flew in, because food served at the White House has to be prepared in-house, for safety and security concerns. I fear the truth is much darker and disturbing. Obama has to be involved in the pizzagate scandal, Question is, will he and his deviant cohorts ever be investigated, let alone tried? P.S. Is there anyone in the last administration who doesn’t make Bill Clinton seem relatively normal?

MSM won’t even report truth to protect children….it is beyond disgusting.
they are all complicit with satan…
I often wondered where obummer kept $65K worth of “pizza” and “hot dogs” in the “rainbow” house and joe biden should’ve been in jail..not vpotus…heck, they should all be in jail…
satan danced the night away while obummer was in office.

If you never heard about it, look up the Franklin Cover up, aka Reagan/Bush child sex ring. It was all set to air on the Discovery channel until some guys in dark suits showed up….

So,they want us to believe that our state of the art White House Kitchen cannot produce a decent hot dog or pizza? Yeah right. Since BO had two food tasters, this seems full of BS.
Sounds more like the transportation of human cargo to me. Call it what it is.
When their karma train comes into the station. I want to be sitting there in the front row.

Though it’s not likely to ever happen,it makes me smile to imagine Obama being put in “General Population” in a Maximum Security Prison someplace-someplace where they REALLY “value” child molesters.

Bubba may be insistent…

with peoples money
print some more for Obama

Hey-that gives me an idea. Instead of the traditional “Tar & Feathers” treatment,how about “Tar and Obama’s Money”? (Shredded,of course-it wouldn’t do to use money that’s actually WORTH anything.)

If we knew the truth about all these folks, pizzagate, and exactly what was/is going on….. I shudder to think that torches and pitchforks might not be severe enough.

George Bush Snr did say if the American people ever knew what we were upto there would be a REVOLUTION by Dawn and we would all be HUNG.
Hillary did say If Trump wins we all Hang.
In a Perfect world Clintons would have been executed, George Bush Snr for Cocaine and Child Trafficking, Obama Spy gate Treason.

Cant wait for Trump to be re elected then in 2021 we take the trash out.

LOL – Michael must have been really hungry. 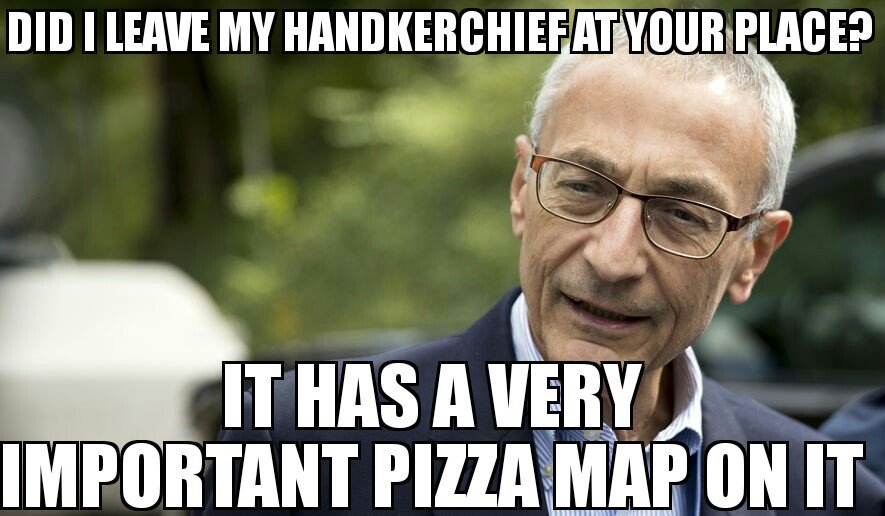 These monstrosities have become so commonplace that it’s also become wearisome to read about and then comment on them. One wants to take them all out from their hidey-holes into a public square at noon, tie them to execution stakes and leave for an hour in the sun before execution by firing squads shown over national TV. This is what happened to the child molester-killer whom I saw in a vision sent to me in Winter 1989, and I worked w/the police in Vancouver, WA state to locate and bring to justice. After his trial he was brought to WA… Read more »

I have a feeling that many more surprises will trickle into public view in the months and years ahead. BHO’s legacy is likely to be awful.

TD:
I believe we don’t really know (and perhaps we’ll never know) just how very much was at stake in the 2016 election to have led to God’s intervention. As horrific as it is, the evil that is Pizzagate is probably many times worse than what we suspect.

You & readers know about the PoS who drugged my drink and tried to have his way w/me when I was 19.5 yrs old, living & working for the first time in my life in the Berkeley-Oakland area of California. From that experience I came to have great empathy w/rape victims and other who suffered sexual assaults. This is the emotional basis for my statement above; obviously I don’t think the death penalty of this young male who worked as a night watchman on a large downtown construction project was too harsh a judgement. Therefore I feel the Pizzagate perps… Read more »

God bless you, Joseph…..I noticed on obummer’s “bracelet” both the flower and the star make a pentagram…interesting.
Prayers for all the children who are victims of these satanic predators.
“Whoever causes one of these little ones who believe in Me to sin, it would be better for him if a millstone were hung around his neck, and he were drowned in the depth of the sea.” Matthew 18:6 AMEN.

Did you happen to see Bill OReilly on Thursday? They were talking about fake news and how ridiculous a story Pizzagate was and he said with such authority that it was all bs. I almost fell off the couch. Where did he get his info? I have heard he do this before like a cover up almost. The BC of BO was another one,

Haven’t seen it; don’t watch O’Reilly. Doesn’t surprise me. All the MSM are circling their wagons on this.
Question that should be asked is a common-sense, logical question:
Since there’s been no investigation by either law enforcement or the MSM, how would O’Reilly know Pizzagate is “fake new” and “ridiculous”?

No need for me to add anything, as it’s very clear that FotM readers & writers are truly onto this and will likely know the truth before the sheeple get it from the MSM [Misguided Servile Messengers], if ever they do!

Chicago-style hot dogs, deep-dish pizzas, and italian beef sandwiches are flown from Chicago to across the country all the time, to transplanted Chicagoans. A few franchises (Portillo’s) have tried to expand into California, Arizona – if they’re still up & running, I don’t know. I remember while living on the west coast for a number of years, I saw a hot dog joint in San Diego that featured several items that’s on every hot dog joint in Chicago – I had a great conversation with the owner who was a transplanted Chicagoan – he usually had to get some of… Read more »

In college, Joe Biden was known to be a pedophile | Fellowship Of The Minds

[…] Biden’s birthday gift to Obama: a child’s bracelet with a pizza charm […]

I want my money back. Where do I lodge my consumer complaint?

$65,000 for Pizza and Hotdogs. Dis some maths. Even if it was 1000 attending. That works out to be $650 worth of Pizza and Hotdogs per person. Pizza $20 Hotdog $5 so thats 130 pizzas eaten by 1 person or 130 Hotdogs eaxh. Both impossibl. These peo pple flew in Kids and thrn either molested them or killed them. The NSA has everything, Now lets says say there is Evidence on Obamas team regarding Pedophilia. Who would be brave enough to bring charges. If anyone knows about the Regan/Bush years involving little Boys. The Franklin coverup. This is been happening… Read more »