This devil of an administration is going beyond political correctness to outright thought crime.
At a Senate Judiciary Committee hearing on March 9, 2016 on Department of Justice (DOJ) operations, Attorney General Loretta Lynch acknowledged there have been discussions within the DOJ about possibly pursuing civil action against so-called “climate change” deniers.
The Legal Dictionary defines “civil action” as a lawsuit brought to enforce, redress, or protect rights of private litigants—the plaintiffs and the defendants—not a criminal proceeding.

Melanie Hunter reports for CNSNews that it was Sen. Sheldon Whitehouse (D-R.I.) who raised the issue at the hearing by drawing a comparison between possible civil action against climate change deniers and civil action that the Clinton administration pursued against the tobacco industry for claiming that the science behind the dangers of tobacco was unsettled. Whitehouse said:
“The similarities between the mischief of the tobacco industry pretending that the science of tobacco’s dangers was unsettled and the fossil fuel industry pretending that the science of carbon emissions’ dangers is unsettled has been remarked on widely, particularly by those who study the climate denial apparatus that the fossil fuel industry has erected. Under President Clinton, the Department of Justice brought and won a civil RICO action against the tobacco industry for its fraud. Under President Obama, the Department of Justice has done nothing so far about the climate denial scheme. A request for action by the Department of Justice has been referred by you to the FBI. My question to you is other than civil forfeitures and matters attendant to a criminal case, are there other circumstances in which a civil matter under the authority of the Department of Justice has been referred to the FBI?”
Lynch said, “Senator, thank you for raising that issue, and thank you for your work in this area. I know your commitment is deep. This matter has been discussed. We have received information about it and have referred it to the FBI to consider whether or not it meets the criteria for which we could take action on. I’m not aware of a civil referral at this time. I will look into that and get back to you, but I’m not aware of a civil referral outside of the one that you just raised.”
Whitehouse asked, “Are there any civil cases with the United States as plaintiff within DOJ’s civil division in which the FBI is preparing the case for the civil division [regarding climate change issues]?”
Lynch replied, “I couldn’t give you that information right now in terms of whether or not.” To which Whitehouse said, “I will take that as a question for the record.”
That the Obama administration had even discussed suing “climate change” deniers should set off every alarm bell in this country.
See also:

George Mason is no doubt spinning in his grave at warp rotational speed.
If this nonsense continues, we will no longer be able to criticize the Roman Catholic church for actions taken against Galileo and Copernicus.

Reblogged this on happytailswag and commented:
Obama administration discussed taking civil action against ‘climate change’ deniers OBAMA ADMINISTRATION TO TAKE ACTION AGAINST WHAT WE THINK & BELIEVE -ODD WAY TO KEEP THE TRUTH HIDDEN – their massive climate engineering attack on the american people !!!

Obama and Company: Cooking up an Obam-anal second coming of the “Alien and Sedition Act.”

Climate changes just means the four seasons, that is about how much difference there is.
NOAA admitted they fudged the numbers. The founder of the weather channel said it is a farce. Another agency said there has been no change for 25 years.
A few decades ago we were preparing for the global cooling. The left can’t even make up their minds.
Frankly winters when I was a kid were cold than now.
But do deny anyone their right to think what they want goes way beyond the power anyone has in DC. Just try it.

He DOES seem to have a tendency to sue whoever chooses to follow the REAL rules and in turn violate HIS rules….

Amusing that there are still those who refer to oil as a “fossil fuel”, as if it could actually have come from dead dinosaurs.
Any how I guess I’ll be in real trouble. I deny global warming, and I defy obama, I defy loretta lynch, and I defy all the U.S. Constitution deniers, who are the true enemies of this country, and are the true impetus behind global destruction.

I’ll stand with ya Kevin.

And Trump supporters are the fascists?

Thank you Dr. Eowyn for this incredible post. I am convinced we live in the “dark ages” now! This administration cares nothing about the U.S. Constitution or the Declaration of Independence and the actual spirit of freedom which includes our “thoughts” and related beliefs. This is amazing. I am shocked.

Because independent thought is “racist” and undermines “social justice” (as determined by leading progressive thinkers), comrade! 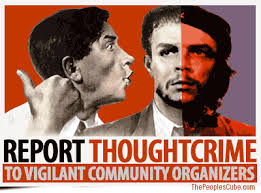 Its time to put these criminals in prison

“to sin by silence when they should protest, makes cowards of men”
I deny climate change, I deny obamma, I deny clinton, and so on…
so all you truthers will have me sitting beside you on the group w bench
live free