New perversity: Furries and the Idaho man who had sex with a cat while dressed as a dog

On August 1, 2013, a Boise, Idaho man, 28-year-old Ryan Tannenholz, was arrested for having sex with a cat. He is looking at five years in prison, if found guilty of six felony counts of crimes against nature and one misdemeanor count of cruelty to an animal.
That a man had sex with a cat is disgusting enough. But the twist to the story is that the bestialist had sex with the poor cat while dressed as a dog. 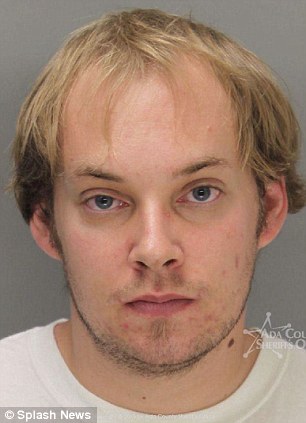 You see, Tannenholz is a “furry” — the name for a member of a “community” of people who dress as animals.
The Daily Mail reports that according to Flayrah, a site dedicated to furries, Tannenholz had a number of animal alter-egos including a dog, a wolf, a white husky, a fox, and a creature called Bubblegum. 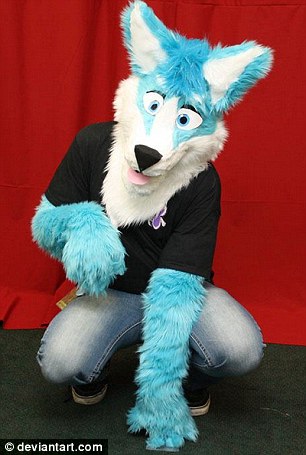 On Tannenholz’s Bubblegum Husky website, he describes his interest in cats and reveals his own pet cat named Einstein: “Have you ever been on the internet and seen one of those cat videos? Bubblegum Husky sure has and man, I’ll tell you what, they really get me going! Cats are so furry, soft plush and loving. Plus, only Bubblegum Husky can REALLY appreciate how truly great these furry felines truly are.” 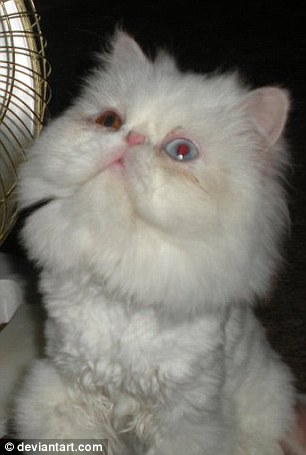 Tannenholz’ pet cat Einstein. Why haven’t PETA and the ASPCA intervened to rescue this poor baby?

According to Wikipedia, the “furry fandom” is a male-dominated (80% males) subculture interested in fictional anthropomorphic animal characters with human personalities and characteristics.  Furries with craft skills create their own plush toys called plushies, as well as elaborate costumes called fursuits.

Furries communicate mainly on the Internet and in conventions; the first convention was in 1987. A University of California, Davis survey suggested that about 40% of furries had attended at least one furry convention. Furries create anthropomorphic animal characters, known as fursonas, used for role-playing in MUDs (multiplayer real-time virtual world), on internet forums, or on electronic mailing lists. Role-playing also takes place offline, with petting, hugging and “scritching” (light scratching and grooming) common between furries at social gatherings. The term “yiff” refers to sexual material or sexual activity among furries, whether in the form of cybersex or offline.

In their 2007 survey, Gerbasi et al. categorized furries into different types. The largest group — 38% of those surveyed — described their interest in furry fandom predominately as a “route to socializing with others who share common interests such as anthropomorphic art and costumes.” Then there are furries who see themselves as “other than human”, and/or who desire to become more like the furry species with which they identify.
According to four different surveys, 14–25% of furries say they’re homosexual, 37–52% bisexual, 28–51% heterosexual, and 3–8% other forms of “alternative sexual relationships,” whatever that means.

I’ve been to a World’s Fair and a rodeo but I’ve never seen this shit.

That’s what that damn iams dog reminded me of. It didn’t look like a dog, it looked like a man dressed in a dog suit, or a real dog that was picked because it looked like one of these sick furry creatures.

Thanks for the link, Mike.
From the HenryMakow link:
“students [at Ausberg College] who dressed up as animals. Not only in the dorm but also while attending class. Some of these students dressed in full dog costumes, slept on dog beds, and ate their meals on the floor from dog dishes.”
Good grief.

I read that article in the Henry Makow link about a week ago and after overcoming my initial disgust, I came to the conclusion that the country isn’t turning into ancient Rome, it’s turning into Canaan. : “Neither shall thou lie with any beast to defile thyself therewith: neither shall any woman stand before a beast to lie down thereto: it is confusion. Defile not yourselves in any of these things: for in all these the nations are defiled which I cast out before you.” (Leviticus18: 3, 23-24 KJV)

Thank you Dr. Eowyn for disclosing this “more in your face evil.” This is demonic. I am learning that there is no end to the perversity that humankind can invent. Absolutely horrible!

Oh, but the ACLU will be all over this… in favor of it.

Actually, the definition of “furry” as a sexual deviance, is exactly what the satanists want people to believe it is (I have extensive knowledge of this particular sub-culture, in case anyone wants to ask questions). Originally the “furry fandom” as it is known, was a rather benign fanclub, having nothing to do with sex, the trouble was, the original furry folk were “tolerant” and had pity on those they presumed to be persecuted, letting them into the “fandom”, as such this “tolerance” and sense of pity were exploited over time, to the point that the originals were gradually driven out,… Read more »

You speak as someone who knows. Sobering object lesson, Seumas.

Thank you Seumas for this most serious information. May God bless you.

New perversity: Furries and the Idaho man who had sex with a cat while dressed as a dog

Words do not exist that come close to adequately describe the disgust.

This will be one of my “shoot me now and put me out of my misery moments”………I can’t believe that the enemy can even think stuff like this up anymore! I think he has HAD to resort to the absurd. Just like he has done in the art world. What else is Left?

The furry fandom needs to repent from sexual deviance and ungodly acts, or they will burn!

[…] Furries are people who anthropomorphise (ascribe human form and attributes) and identify with animals. They create and role-play as anthropomorphic animal characters, known as fursonas, in MUDs (multiplayer real-time virtual world), on internet forums and electronic mailing lists. Role-playing also takes place offline, with petting, hugging and “scritching” (light scratching and grooming) at social gatherings and furry conventions attended by furries in fursuits. A survey in 2008 found that 17% of furry respondents reported an interest in bestiality. (See my post of a year ago, “New perversity: Furries and the Idaho man who had sex with a cat while… Read more »