MYOB: Restaurant workers tell A-listers to shove it after call for higher wages

Stick to worrying about your agents fighting for your own MASSIVE salaries.
From NY Post: Sarah Jessica Parker, Reese Witherspoon, Natalie Portman and more than a dozen other A-listers were told to shove it by 500 restaurant workers in New York who signed an open letter to the actresses.
The missive is a response to a letter that the Hollywood elites sent to Gov. Cuomo asking him to raise the minimum wage for tipped workers.
“You’ve been misled that we earn less than minimum wage and that we’re somehow helpless victims of sexual harassment,” the restaurants’ workers said in their letter, which was organized by Maggie Raczynski, an Outback Steakhouse bartender in Clifton Park, NY. “Thank you for your concern. But we don’t need your help and we’re not asking to be saved,” they wrote.
Cuomo is considering raising the minimum wage for tipped workers, which is as much as $8.65 in the city for restaurant workers, to be equal to the regular minimum wage, which is rising to $15 by 2020.
“The cost of food is going to go up and the number of servers is going to go down,” Raczynski told The Post.
DCG
Please follow and like us:

I am still waiting for these pontificators to put their money where their mouth/opinion is. That is…. for one of them to walk on the set of their latest project (for which they are being paid multi-million dollars) and tell all the participants that they are sharing their mega-buck salary so that all get an equal recompense. … still holding my breath.

phoenix . . . . I rather think that will never happen. The elites like to be at the very top of what they consider to be society. Somehow they feel qualified to direct us peons. Quite a contradiction since there are rather few in the acting profession who have a higher education, they got into acting since they were unable to find suitable work actually doing something for society.

They got into acting because they come from the ‘right stuff’ aka the right blood lines.

Or they sold their souls to the Devil, as Katy Perry admitted years ago:
https://www.youtube.com/watch?v=SPvtGvGtOzM

They like to play “intercessor”. It goes with their image of themselves as representatives of the downtrodden while being above it all. There is a big difference between a saint, like St. Francis and a hypocrite, like a Hollywood actor.
For the life of me I don’t understand why people find these creeps so fascinating. I suppose they live vicariously through them.

As amply shown by the many #MeToo revelations that began with the exposé of Harvey Weinstein. Among the rumored sleeping-their-way-to-movie-roles are Jennifer Lawrence and the holier-than-thou Gwyneth Paltrow, according to Crazy Days and Nights.

We have some very smart workers in New York. When wages are artificially inflated, businesses lay off staff, or they automate – also eliminating jobs. Businesses that are forced to increase wages often do away with tipping. This not only lowers total compensation, but lessons motivation.

Good for Maggie Raczynski and the 500 restaurant workers who signed that letter! When will Hollyweirdos stop sticking their noses in everything and start minding their own business? The #MeToo movement still is not exposing pedophiles, who are rampant in Hellywood.

Conservatives also donate more than liberals to charity, both in money and in service.

“It’s odd, how the Left calls us Nazis, Racists, and haters though.”
I used to resist this explanation, but now I wholly embrace it after the Left provided plentiful examples of their over-the-top venomous viciousness — they’re projecting, as in psychological projection.

These are not logical people. In fact, they’re not even “sane”. I suspect if you handed each a brick you could convince them to beat themselves to death with it out of white hatred. They’re actually proud of their stupidity. It makes them feel like they belong to something.

I’m sure this is the latter day version of singing “The Internationale” down at the union hall. Everything we see lately ls like a cheap play. Everything is being couched politically to require people to pick one side or another. Doing so is expected to be a package deal. No substitutions. So one version of bullshit is pitted against another. We are currently looking at two alleged “parties” with almost identical agendas. They differ in superficial ways. One is basically claiming to be Socialist (actually Communist) while the other is claiming to be “for America” while selling out completely to… Read more »

Have you seen various recent articles (Forward, eg) with Jews bragging about today’s “antifa” being a revival of 1940s Jewish thugs who called themselves, specifically, “antifas”? The boast is that back then well known Jewish gangsters paid for thugs using bats and clubs to break up supposedly fascist anti-war marches. It should be obvious they’re indirectly boasting that today’s masked antifa thugs and financial backers have the same pedigree, but you never know. I wonder how other armed and masked groups can arrange for a police stand down or take it a step further as with the antifas and arrange… Read more »

Well, history repeats. It isn’t surprising that the authors of the current mess would use their past experience.

Always remind the left that Lenin was an old white dude. Then ask why they would follow such a person.

Yes. This is another example of how good intentions mean absolutely nothing. These workers understand that as minimum wages rise, jobs disappear. This is because the industry affected by taxation has to survive by curtailing its labor force. I wish Hollywood celebrities would emulate James Woods or Ted Nugent, two men who have the common sense G.K. Chesterton always called for. And as for New York’s Governor Cuomo, he may not be the mental patient Jerry Brown of California is, and that’s no blessing: HE IS A THUG. Yes, the Little Do-Gooder who wants to bring back CONGESTION PRICING, after… Read more »

No, but she probably would have liked it more than Mr. Ed.

It’s not about helping them ‘get’ more money. It’s about promoting the falsity of the whole ‘minimum wage’ theory of government regulation. These restaurant workers are much wiser than these Hollywood bubble headed morons. They know what happens if the minimum wage goes up.
Also, it DEVALUES wages of those who had gotten raises in the past. But, the communist pushing Helly weirds won’t mention that.

Reblogged this on necltr and commented:
Wisdom from those living in reality to those trained to live in clouds.

These socialists will tend to everybody else’s business until they put them out of business.

I’d compare Sarah Jessica to a pelican,but then I’d feel bad about insulting the pelican.

Reblogged this on On the Patio and commented:
Well done restaurant workers! Nice to see that there are more out there that would like to see and not hear from all the Hollywierdos about how they are there for us. no they are not! They are so disconnected that they need something to make us think they are something more than play actors.

SJP looks like she should be stirring a cauldron. The other one still looks pretty. I guess the evil hasn’t withered her features yet.

The evil may not have withered Reese’s features yet (thanks to expensive doctors, fillers, botox, etc.) yet the evil did enter her soul a long time ago: 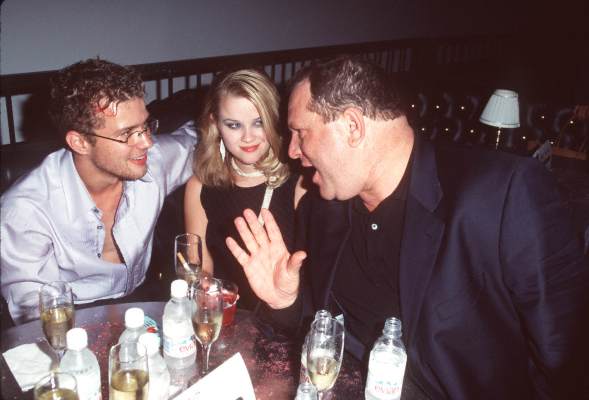 I think this Hollyweird group needs to be paid MINIMUM WAGE.

Smart bartender. She knows the higher the hourly wage, more will be taken from her tips to pay her taxes. Leave well enough alone. Making anywhere from 4.25 up gives them a take home check also.
Sounds like these stingy actors are trying to get higher wages so they don’t feel the need to tip.
These do gooders are laughable. I did corporate training for big restaurants for years.

the comment about the cost of food going up and number of employed servers going down is exactly what happened here in Ontario when the Liberal govt raised the minimum wage to 14$ January 1. Also any that are still employed that had benefits lost them.I know a guy who told me years ago that Libtards just don’t get it, that in a competitive market besides price being deterrmined by supply and demand for it, the cost of it plays a huge role. He lent me a book called The Political Economy by Prof. Frederic Bastiat wherein he addressed all… Read more »

Here in Ontario they raised the minimum wage to 14$ and as a business owner it’s been a disaster. Higher prices, fewer hours for staff and constant stress. It’s just a scam by the liberals to get more tax revenue. Real solution is low income people should pay less taxes.