What would you say if I told you that women in America are told that, if they want to work outside their homes, they must breastfeed their male co-workers?
Yes, I’m serious: Adult women are to breastfeed adult men who are not their sons. (Never mind the fact that women breastfeeding adults sons is itself a repugnant thought.)
But that’s exactly what fatwas (legal decrees) issued by clerics of that Religion of Peace and Reason and Enlightenment and Human Decency are saying.
Barenakedislam reports on April 16, 2012, that this absurdity began in May 2007, when a Dr. Izzat Atiya, the chair of the Department of Hadith at Al Azhar University, Cairo, Egypt, issued a fatwa saying that female workers should “breastfeed” their male co-workers “directly from her breast at least five times” in order to work in each other’s company.
Posted: April 16, 2012 | Author: barenakedislam | Filed under: IslamoMania |30 Comments » The great and wise Dr. Atiya based his fatwa on a hadith—a documented saying or doing of Islam’s prophet Muhammad and subsequently one of Sharia law’s sources of jurisprudence. 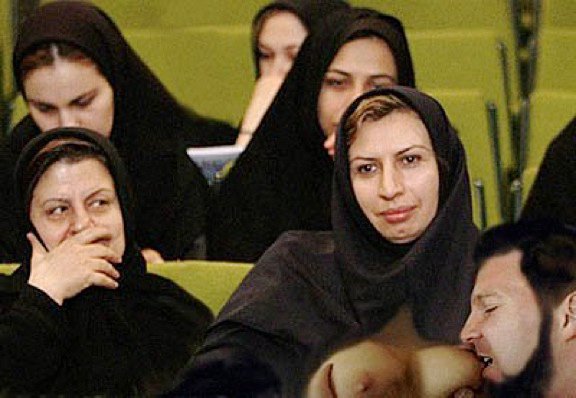 The breastfeeding subject was revisited three years later in 2010, when a high-ranking Saudi, Sheikh Abdul Mohsin al-Abaican issued a fatwa confirming that “women could give their milk to men to establish a degree of maternal relations and get around a strict religious ban on mixing between unrelated men and women.”
The new fatwa, however, differed slightly from Dr. Atiya’s, insisting that “the man should take the milk, but not directly from the breast of the woman. He should drink it [from a cup] and then [he] becomes a relative of the family, a fact that allows him to come in contact with the women without breaking Islam’s rules about mixing.”
Two years later, adult breastfeeding once again raises its ugly head, but now it pertains to a wife breastfeeding her husband.
A report titled “Kuwaiti Activists: Husband Breastfeeding from Wife not Prohibited,” published earlier this month by Arabic RT (see also Garaa News) opens by announcing that “The adult breastfeeding fatwa has returned once again to the spotlight, after Kuwaiti Islamic activists supported the adult breastfeeding fatwa issued by the Egyptian Salafi, Sheikh Jamal al-Murakbi [different from Al Azhar’s Sheikh Atiya].  This time around, the Kuwaitis examined the adult breastfeeding fatwa in the context of relations between a man and his wife.”
The mental images conjured by this insanity are too horrible for a Wednesday morning.

Oh, the horror! The Horror!

I’m never surprised by stories relating to this lunatic ‘religion’ of Islam. Sometimes, like this one, the stories sound like satire coming from theonion.com.

These guys have a fatwa for just about everything, don’t they?? I learned a lot about them from my friend’s nephew, a Marine who basically lived in Iraq for five years. The US hasn’t cornered the market on perverts, no matter how holy they say they are.

They are legalizing perverts! What next? Keep them out of here!

This is sooooooooooo entirely gross, they are sicker than I could ever imagine…

These people are sick…

May Jesus Christ and His Immaculate Mother convert these people to the true faith-Christianity-soon! That is, before they get over here and start demanding these perverse acts. God save Europe from this sickness too.
Muslims really need to be deported from the west and sent back to their land of origin.

And the STUPIDITY just keeps on comming! How damn dumb are these morons? Of course in England they breast feed till the children 11 or 12! These people have lost their mind! IF THEY EVER HAD ONE! Semper Fi.

Thank you Grouchy and Dr. Eowyn for setting out these horrific facts which make me physically ill. So this is in accordance with the teachings of the great Mohammed. Thus, an indictment in and of itself. Really, really sickening!