Let’s see the proggies try and defend this.

From The Daily Mail: British Muslims disagree with the rest of the country on a range of key issues such as sexuality, freedom of speech and polygamy, according to new research. A poll carried out by ICM discovered that more than half of Muslims disagree with homosexuality being legal in Britain, while a quarter support Sharia law being introduced into parts of the country instead of British law.
The full findings will feature in a Channel 4 documentary presented by Trevor Phillips, former head of the Equality and Human Rights Commission, on Wednesday. Entitled What British Muslims Really Think, the programme will investigate the ‘split’ between Britons who follow Islam and the rest of the population.

Among the most startling findings by the research was the attitude of Muslim men and women to the treatment of wives. A third of those polled said it was acceptable for a British Muslim to keep more than one wife, while 39 per cent said wives should always obey their husbands. Nearly half of those questioned said it was unacceptable for a gay or lesbian person to teach their child, with the majority also opposing gay marriage.
Former equal rights chief Phillips, who speaks to several members of the Muslim community on their views during the documentary, states that ‘the integration of Muslims will probably be the hardest task’ the country has ever faced.
He told The Sunday Times Magazine: ‘I thought Europe’s Muslims would gradually blend into the landscape. I should have known better. Britain desperately wants us to think of its Muslims as versions of the Great British Bake Off winner Nadiya Hussain, or the cheeky-chappy athlete Mo Farah. ‘But thanks to the most detailed and comprehensive survey of British Muslim opinion yet conducted, we know that just isn’t how it is.’

More than 80 per cent of Muslims surveyed said they felt British and were happy living here, yet conceded they were more likely to stay within their own communities, especially when it came to relationships. The ICM figures reported that more than half mix with non-Muslims each day, normally through work or education, but one in five never enter a non-Muslim household.
Phillips, who was head of the equal rights commission from 2006 and 2012, published a report on Islamophobia twenty years ago, in which he underestimated the number of Muslims that would be living in the UK.
Nearly three million Muslims currently call Britain home, half of which were born abroad, while it is projected that at least six million will live in Britain by 2050.  As part of its research, ICM carried out interviews with 1,801 adults compiled from a random sample who categorised themselves as being Muslim.
DCG

And not a peep from western homosexuals who, together with the other groups who make up the Left, are in common cause with Islam because “The enemy of my enemy is my friend,” their common enemy being Christianity and Christian civilization.

The poll taken is for today; tomorrow, if the power of Islam increases, the once moderate Muslims will follow Koranic teaching as it becomes more successful. The former colony of Pakistan and other countries will then replace British laws with sharia with near unanimous acceptance.

Gosh, they won’t assimilate? (What was your first clue, Mr. Phillips?) 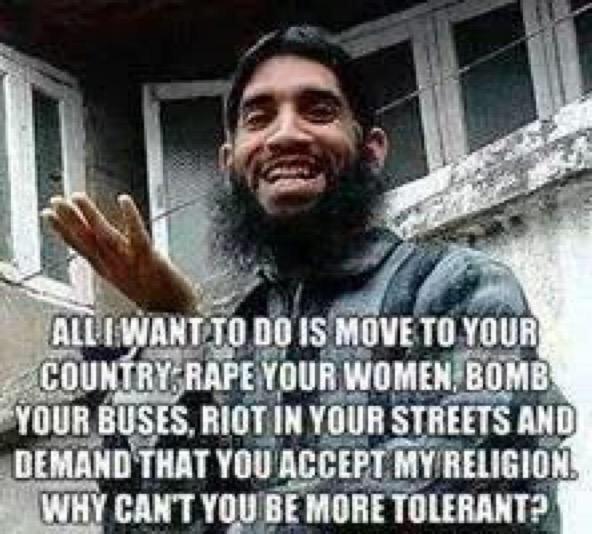 Ideologically and religiously, the Muslims are necessarily schizoid, and this is due to the fact that their Founder, Mohammed, was schizoid. Mohammed taught that a Muslim man is free to gratify his sexual urge in any way he sees fit.
The late, great Eric Hoffer, in his seminal work, “The True Believer,” tells us the simple truth: “All followers of mass movements live out the biographies of their founders.”

And more than half of Muslims want sex with goats and children to be legal.